Train robber may still be here

Ronald Arthur Biggs, 40, the last of the Great Train Robbers, has vanished without a trace. 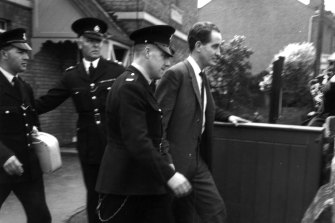 But police are confident that Biggs, who has eluded them for three days in the nation’s biggest manhunt, is still in Melbourne.

Biggs is wanted for escaping from prison in Britain four years ago. He was goaled for 30 years for his part in the $5 million mail train robbery.

State and Commonwealth police have been placed on a 24-hour alert. Every criminal haunt in the Eastern States have been raided.

Police say Biggs panicked after his picture appeared in newspapers last week and abandoned an elaborate escape plan to flee the country.

He left his neat brick home in Hibiscus Road, Blackburn, on Friday only minutes before armed consorting squad detectives arrived.

The four-man squad saw a shadowy figure leave the house and drive away in Biggs’ Holden Monaro sedan. The detectives followed but found it was Mrs Biggs driving the car. They returned with her to the house but found that Biggs had fled, leaving his three children behind.

Mrs Biggs is being held on a 48-hour detention warrant, which alleges she is an illegal immigrant. The three children – Nicholas, 9, Christopher, 6, and Farley, 2, are being cared for at a State home in Burwood.

Police have been told that Biggs, who worked as a carpenter at Tullamarine Airport, asked his employer for his final pay on Thursday night. Biggs was nervous, and said he was “under pressure.”

A man who worked at the jetport has told police that Biggs said to him on Thursday: “I have to go. The heat is on. You can read about it in the paper tonight.”

The man read a newspaper report on the search for Biggs in Melbourne and telephoned police. Detectives raided his Blackburn home soon afterwards.

It was the second time in six months that police had missed capturing Biggs.

In May this year he and his wife were slightly injured when their car struck a light pole in Box Hill. The car was wrecked, and Biggs suffered broken ribs and a cut face. Mrs Briggs was severely shocked.

Police questioned the couple after the accident, but let them go.

Biggs’ elaborate escape plan, which he intended to use if police closed in, is believed to have involved Eric Flower, 34, who escaped from Wandsworth Prison with him in 1965.

Both men lived in South Australia after entering the country illegally in 1966. Biggs’ aliases since he came to Australia have been Terry King, Terry Furminger and Terence Cook.

Biggs adopted the name of Cook after coming to Melbourne from Glenelg in South Australia in 1967. He was listed in a Melbourne Business Directory and the Melbourne telephone book as Terence Cook.

Police say a South Australian car which was parked outside Biggs’ home in Hibiscus Road, Blackburn, in July this year, was probably driven by Flower, who fled South Australia in March, 1967. They have been told both men were seen together in South Australia before their wives arrived from England.

Neighbours in Hibiscus Road, Blackburn, who lived beside the Biggs family for two and a half year without suspecting Biggs’ secret, said last night that the Biggs children had talked about going to South Africa for a holiday soon.

Mrs N. Williams said last night that the Biggs children had recently said their father was taking them to South Africa.

“They told me they were going to have a look through western Victoria first and then leave the country,” she added.

The pilots have been warned that Biggs may try to hire a light plane to reach New Zealand or the outback of South Australia.