Hundreds of thousands of passengers will have their plans in tatters after 78 Eurostar trains were cancelled and hundreds of flights were called off. EasyJet has called off 223 flights between today and Wednesday. Eurostar said it has cancelled almost 100 services and no tickets are available for purchase until Tuesday while strikes at ports will affect ferry services in and out of France.

The public demonstrations, which the government have warned could turn violent, will be an unwelcome home gift for embattled President Macron after his clash with President Trump at the NATO summit in the UK.

French workers will today take to the streets in protest over changes to the pension system.

The strikes comes on the back of more than a year of protests by the gilets jeunes (yellow vests) movement.

Mr Macron wants to roll out a unified pension scheme in place of the dozens of different systems. 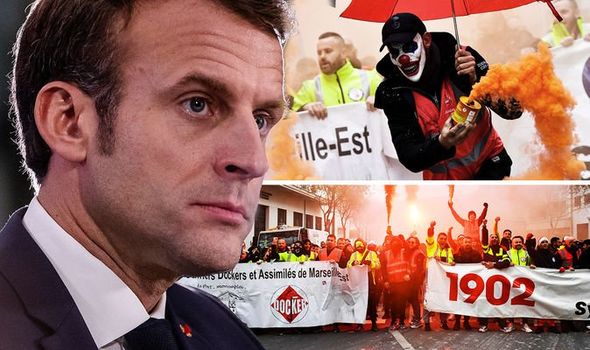 His plan would see employees earn points for each day worked which would be converted into benefits for their future pension.

Over the past decade the official retirement age has been raised from 60 to 62.

Parisians have taken to the roads on bikes in a bid to get around the disruption to public transport.

An extra 6,000 police officers have been drafted into the capital ahead of planned protests.

A demonstration in central Paris is gathering momentum, with many people carrying trade union flags.

The unions have organised a rally in the city to take place at 2pm.

SINGAPORE (Reuters) – Singapore said on Monday that the coronavirus outbreak will hurt its economy this year, as it announced