Former head of British Army Lord Bramall left part of his £490,000 estate to the Gurkhas after his death aged 95, will reveals

The former head of the British Army left part of his £490,000 estate to the Gurkha Welfare Trust after his death aged 95.

Field Marshal Lord Edwin Bramall, who was a part of nearly every major UK military campaign from the Second World War until his retirement in 1985, passed away at his home in Crondall, Hampshire in November 2019.

He had landed in Normandy at the age of 21 in charge of a platoon and was wounded twice before fighting his way through Holland towards Berlin, winning the Military Cross, becoming a Knight of the Garter and, eventually, Chief of Defence Staff.

Lord Bramall, who became a life peer as Baron Bramall of Bushfield in 1987, left the majority of his £486,259 estate to his children Nicolas and Sara and his grandchildren.

But the D-Day veteran specified in his will, dated July 2018, that some of it must go to the Gurkha Welfare Trust – for whom he was Vice Patron. 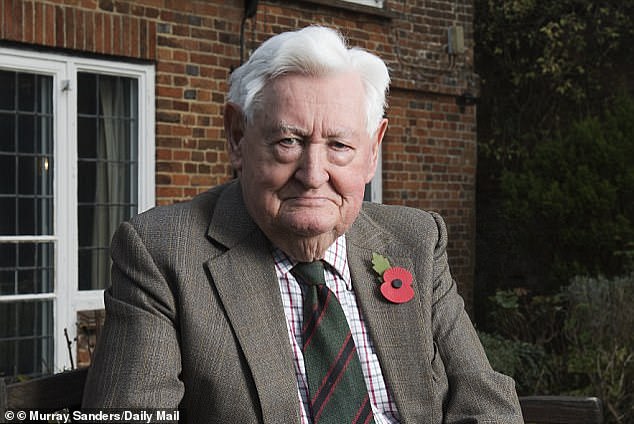 Field Marshal Lord Edwin Bramall (pictured) passed away at his home in Crondall, Hampshire in November 2019 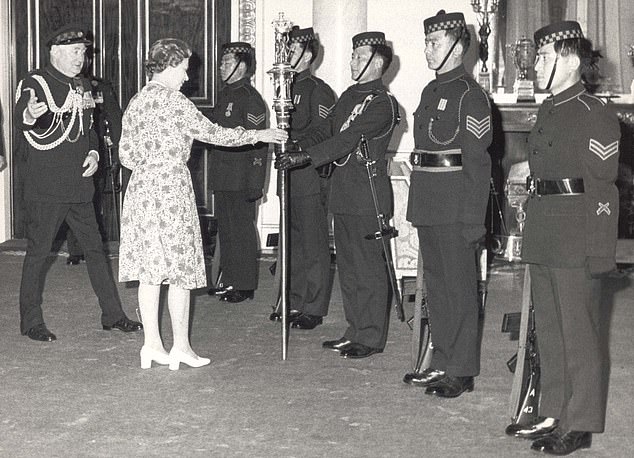 Pictured: The Queen receives the 2nd King Edward VII’s Own Gurkha Rifles and Lord Bramall at Buckingham Palace in 1986

Who are the Gurkhas? Nepalese soldiers who have fought for Britain for 200 years

Gurkhas have been part of the British Army for more than 200 years, with their involvement ‘marked by excellence and sacrifice’.

They first served the Crown in 1815, when the British East India Company signed a Peace Treaty with Nepal which allowed it to recruit from its former enemy.

In 1947, after the partition of India, an agreement between Nepal, India and Britain saw four Gurkha regiments from the Indian Army be transferred to Britain.

These eventually became the Gurkha Brigade, which has since served in Malaysia, Borneo and Hong Kong.

In May 2009, Gurkhas won the right to settle in the UK following a lengthy campaign led by the Gurkha Justice Campaign and British actress Joanna Lumley – whose father served with the 6th Gurkha Rifles.

Previously, Gurkhas who had served their time in the British Army were discharged back to Nepal.

But this change meant veterans who had served for four years or more could apply to live in Britain, alongside their wives and children.

Lord Bramall ordered that four shares of his will should be split between the Trust, All Saints Church in Hampshire and any great grandchildren he may have in the future, according to a grant of probate document filed last August.

The Trust, for whom Lord Bramall was an ‘instrumental figure’, provides financial, medical and community aid to Gurkha veterans and their widows so they are able to ‘live with dignity’ in Nepal.

It also offers advice and support to help thousands of retired Gurkhas who chose to settle in the UK after being recruited into the British Army.

However, the Trust claims it has yet to receive Lord Bramall’s gift.

Gurkhas are soldiers recruited from Nepal who have served the British Crown for more than 200 years, including throughout the early Afghan wars and the two World Wars.

In May 2009, Gurkhas won the right to settle in the UK following a lengthy campaign led by the Gurkha Justice Campaign and British actress Joanna Lumley – whose father served with the 6th Gurkha Rifles.

Previously, Gurkhas who had served their time in the British Army were discharged back to Nepal.

But this change meant veterans who had served for four years or more could apply to live in Britain, alongside their wives and children.

Lord Brammal was a colonel with the 2nd King Edward VII’s Own Gurkha Rifles between 1976 and 1986.

The battalion served in Malaysia, Hong Kong and Brunei until it became part of the Royal Gurkha Rifles in 1994.

Writing in 2016, he said: ‘In common with anyone who has ever served with the Gurkhas, I think they are marvellous, the very best and most loyal of fighting men.’

The decorated war veteran had taken part in the Normandy landings in June 1944 and was chief of the defence staff in 1982 until 1985.

Lord Bramall lived at Bulford Manor in Wiltshire during his time as head of the army with his wife Lady Bramall, who died in 2015. 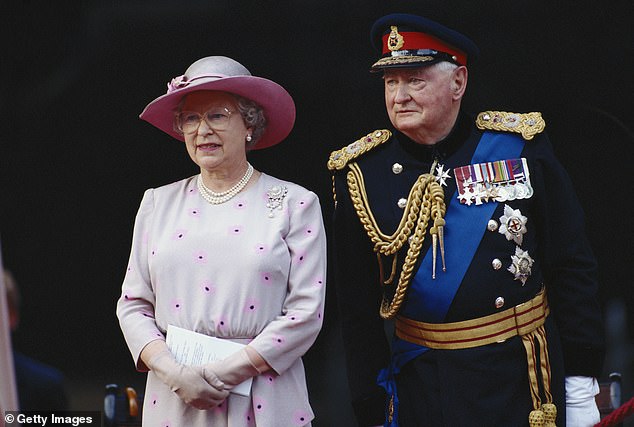 In May 2009, Gurkhas won the right to settle in the UK following a lengthy campaign led by the Gurkha Justice Campaign and British actress Joanna Lumley – whose father served with the 6th Gurkha Rifles. Pictured: The Queen and Lord Bramall 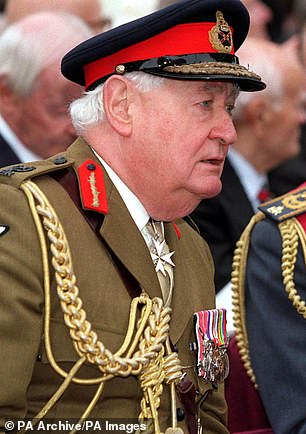 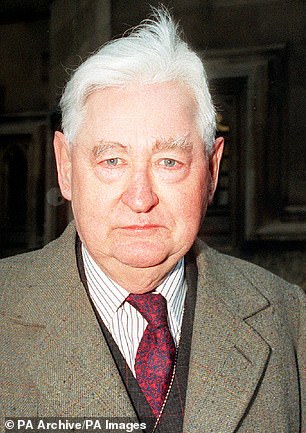 Lord Bramall (pictured), who became a life peer as Baron Bramall of Bushfield in 1987, left the majority of his £486,259 estate to his children Nicolas and Sara and his grandchildren

However, the distinguished army officer’s exemplary record was tarnished in his final years by the false abuse allegations of fantasist Carl Beech, known as ‘Nick’.

Lord Bramall was one of many to be falsely accused of being involved in historical paedophilia and child abuse.

Metropolitan Police raided his home in 2015 as part of Operation Midland, but no charges were brought in relation to the investigation and the force paid Lord Bramall an undisclosed compensation sum in 2017.

His accuser, Beech, was later jailed for 12 counts of perverting the course of justice and one count of fraud. 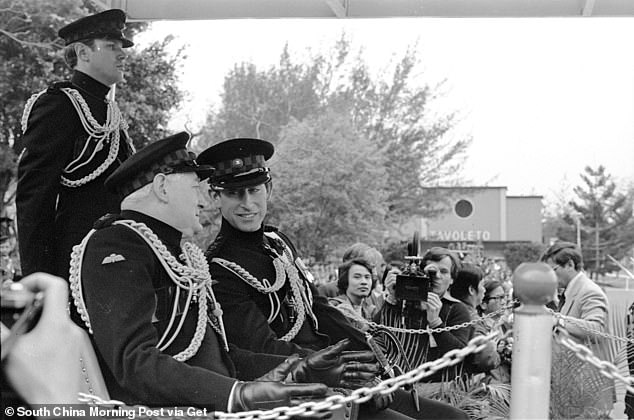 Dwin, the Eton Old Boy who enlisted straight from school took part in D-Day aged 21 and before rising to lead Britain’s Armed Forces 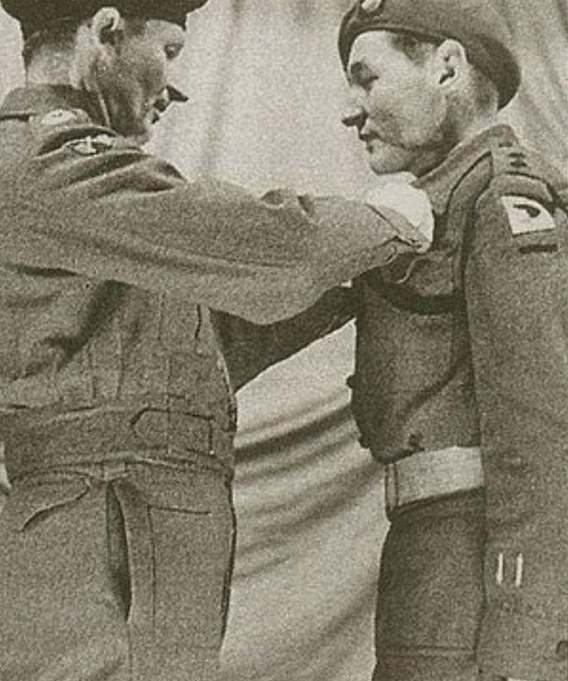 Lord Bramall, as a lieutenant, receiving his Military Cross for gallantry in the field from Field Marshall Montgomery in 1945

Edwin Noel Westby Bramall was born in Rusthall, Kent, in 1923. His father was an artillery officer in the First World War – and would serve again in World War Two, living off proceeds from his family’s Egyptian cotton business in between.

Edwin, known as ‘Dwin’ to his friends, attended Elstree School in Hertfordshire and then Eton College, where he excelled in rugby and cricket.

He enlisted in the King’s Royal Rifle Corps, 60th Rifles aged 18 and was commissioned as an officer in 1943, one year before he would storm Juno beach in the Normandy landings, commanding a motor battalion platoon with half-tracks, providing infantry support for tank regiments.

He was wounded in the thigh near Caen and was then evacuated back to Britain – and would return to the battlefield five weeks later, the Times reported.

Bramall was wounded in the shoulder, spent three days in a field hospital and was back in action again.

He went on to lead a reconnaissance patrol into a mine-laden wooded area and ran into a German outpost on October 20, 1944, where he wounded two Germans, took one prisoner and made seven others flee before coming back with information about German positions.

Bramall would be awarded the Military Cross by Field Marshall Montgomery.

As the war in Europe came to a close he qualified as a parachutist and spent a year administering occupied Japan – which had surrendered before he saw active service there. 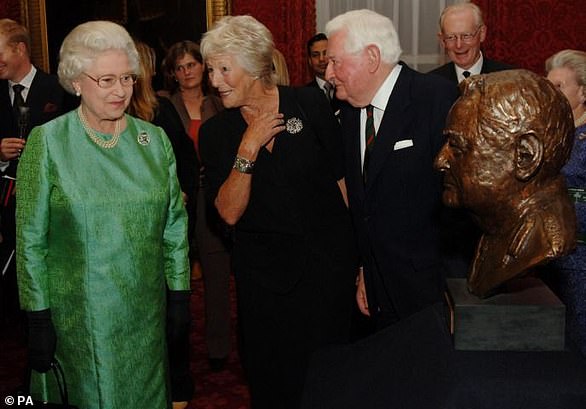 Queen Elizabeth II talks with Field Marshall the Lord Bramall, General Officer Commanding Northern Ireland of the Royal Green Jackets and Lady Plastow, the sculptor of the bust of Lord Bramall seen to the right, 2006 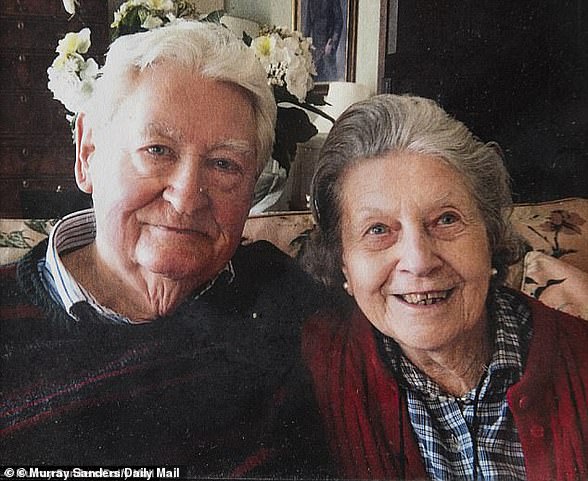 He turned down a spot at Christ Church College, Oxford, instead opting to joing the Military Operations Directorate at the War Office.

He met Avril Vernon, the daughter of a brigadier-general, in London, and the pair married in Winchester Cathedral in 1949. The couple had two children – Sara and Nicolas.

Bramall would pass into the Staff College at Camberley, the youngest man in his year – aged just 29 – in 1952. He was then posted to Egypt and Libya where he would lead a 650-mile expedition across the Great Sand Sea to Kufra and returned to Camberley an instructor.

He was chosen by then chief of defence staff Lord Mountbatten to merge the army, navy and air force ministries into the single Ministry of Defence, and was awarded an OBE for his efforts.

He left Whitehall as commander of 2nd Green Jackets for service in Borneo – where Indonesia’s President Sukarno had been ordering attacks into British protectorates of North Borneo and Sarawak – and served two four-month tours in the jungle. 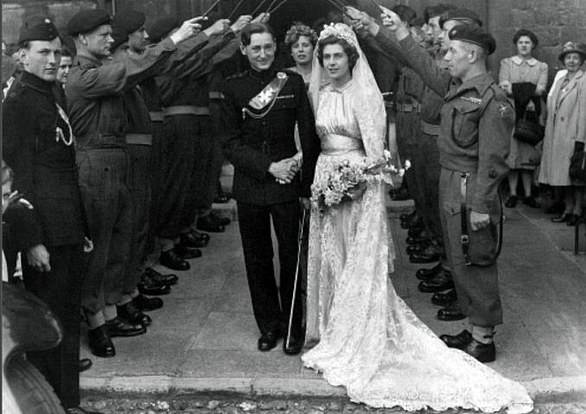 He met Avril Vernon, the daughter of a brigadier-general, in London, and the pair married in Winchester Cathedral in 1949

In 1972 he was appointed general officer commanding 1st Armoured Division in West Germany as a major-general. Two years later he would be knighted.

Bramall was then made commander of British Forces in Hong Kong, and in 1976 returned to Britain where he was made a four-star general and commander-in-chief of UK Land Forces.

After his promotion to vice-chief of defence staff (personnel and logistics) in 1978, raising the pay of servicemen became one of his top priorities to put a halt to an exodus that threatened British military integrity.

It did not take long for Bramall to be appointed chief of the general staff – the post he occupied when Argentina invaded the Falklands in 1982.

The invasion was repelled and Bramall was made a field marshal and chief of the defence staff, and would eventually retire from the army in 1985.