A manager at a Victorian farm skimmed at least $300,000 from migrant workers through sham labour hire companies by arranging for farmhand staff to pack broccolini and asparagus on low hourly rates, a court has heard.

Sarith Kit had workers, who were either not Australian citizens or didn’t have work visas, pack vegetables at Vizzarri Farms in Koo Wee Rup, south-east of Melbourne, for as little as $14 an hour in 2015 and 2016, the County Court heard. The award rate at the time was around $22 an hour, the court heard. 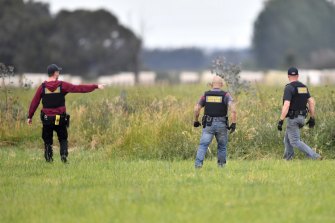 While Kit put cash in envelopes distributed to the workers, he also skimmed money for himself through payments made out from M&G Vizzarri, the company that owned the farm, to two labour hire companies, V&T Golden and STN Seven, the court heard. Prosecutor Nicholas Robinson, QC, on Monday described the two entities as “sham labour hire companies”.

Some of the workers were from Indonesia, while others were reportedly from Thailand, Malaysia and Cambodia.

On the same day, authorities seized more than $400,000 cash from Kit’s home in Keysborough.

Kit’s lawyers concede $300,000 of the cash was “Vizzarri money” but say other piles were connected to the laundry business the 48-year-old’s partner runs. Kit’s lawyers also argue he set aside the money as a “float” to be paid to the workers but concede the sum was the proceeds of a crime.

Prosecutors argue Kit’s intention was to keep the cash for himself.

Judge Gregory Lyon spent much of Monday’s plea hearing listening to lawyers’ arguments about the cash found at Kit’s home, and told him he would likely be jailed. Kit, who no longer works at the farm and is now a factory worker, is currently on bail.

Under the arrangement Vizzarri Farms had with V&T Golden and STN Seven, the labour hire companies were to provide the farm with seasonal workers and their invoices said the workers were paid at least $21 an hour.

Court documents show although the award rate specified casual workers be paid $22.13 an hour at the time, women were paid $14 an hour, men $15 and drivers $19. It was the drivers, Mr Robinson said, who recruited workers by word of mouth and transported them to and from the farm.

Despite the underpayment, defence counsel Simon Moglia said the case against his client was not one of worker exploitation.

Mr Moglia said Kit worked at the farm for 21 years and was so focused on ensuring the packing shed ran smoothly there was “a blurring of the line” over his responsibility to check staff weren’t illegal workers. Kit now accepted he was culpable for failing to do so, his lawyer said.

Mr Moglia argued against a jail term as Kit eventually cooperated with authorities, accepted his responsibility and had faced delays between the investigation, being charged and facing court. There was also no evidence the cash was connected to other offending, akin to other cases of money laundering and dealing with the proceeds of crime.

But prosecutors want Kit to serve time in jail given the longevity of his offending, to deter others and for his role at the top of the scheme. Workers never dealt with the farm’s owner, Giuseppe Vizzarri, and Kit was “seen by staff as the boss”, Mr Robinson said.

Mr Vizzarri was previously charged but prosecutors withdrew the charge against him. But his company, M&G Vizzarri, is to face trial at a later date.