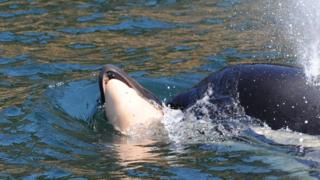 A killer whale who carried her dead new-born calf for 17 days while she swam 1,000 miles (1,600km), is pregnant according to scientists.

Scientists in Washington state made the discovery while recording drone images of Southern Resident killer whales.

They said that whales from three pods were pregnant including Tahlequah.

Killer whales have been known to carry dead calves for a week, but scientists at the time said Tahlequah set “a record”.

Tahlequah is part of a community of three pods, made up of some 72 whales. They are frequently encountered off the southern end of Vancouver Island in Canada and in inland marine waters of Washington state in the US.

Both Canada and the US list the Southern Resident killer whales as endangered.

Scientists John Durban, senior scientist of Southall Environmental Associates, and Holly Fearnbach, marine mammal research director for the non-profit SR3, captured images of the whales as part of a long term study into their condition, the Seattle Times said.

The images were taken from more than 100ft (30m) above the animals so as not to disturb them.

The scientists warned that, although pregnancies among Southern Resident killer whales are not unusual, the majority of recent pregnancies have not resulted in successful births.

Tahlequah’s initial pregnancy was said to be the first in three years among the whales. Two Southern Resident killer whales have successfully given birth since and are still alive, the Seattle Times said.

According to research from the University of Washington, failures to reproduce are linked to nutrition and access to Chinook salmon – which have been in dramatic decline in recent years.

Scientists have warned boats to stay away from the whales and give them space.

Tahlequah captured the world’s attention in August 2018 when she was spotted carrying her dead calf.

Ken Balcomb, senior scientist at the Centre for Whale Research, said at the time that Tahlequah’s display of grief was unusual.

“We’ve seen mother whales carry dead babies briefly, for parts of a day. We saw one a few years back for a couple days. But this sets a record,” he said.