The Eagle Mountain Data Center will house some of Facebook’s vast network of servers, joining other sites belonging to the tech giant in the United States, Denmark, Sweden, Ireland and Singapore.

Construction began in 2018, with 12,000 tons of steel and 100,000 cubic yards of concrete being hauled into place to put together three buildings which Facebook says will eventually be solar-powered.

And even though construction is not yet complete, Facebook announced last month that two more buildings will be added to the Eagle Mountain complex, expanding the site’s footprint by a further 900,000 square feet. 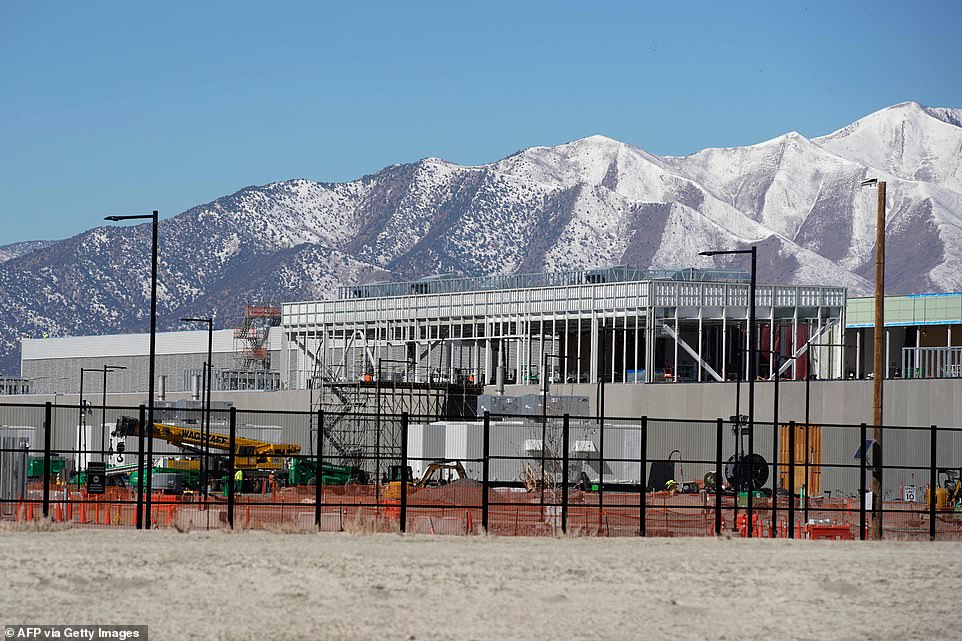 Under construction: Scaffolding and equipment are seen at the site of Facebook’s new data center in Eagle Mountain, Utah on Monday after the social media giant announced a massive new expansion before the data farm is even complete 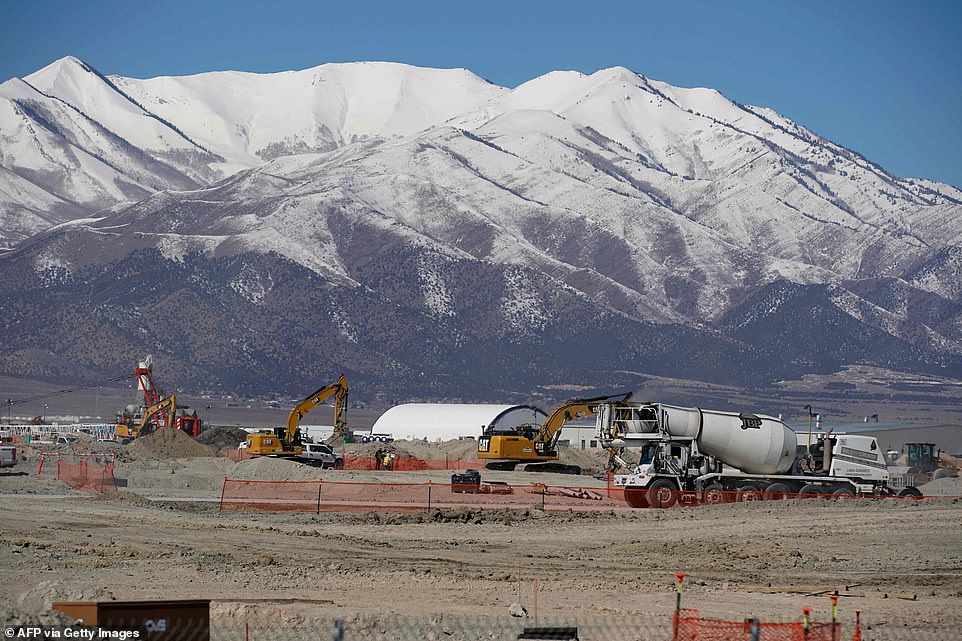 In the mountains: The site in Eagle Mountain, Utah is one of several under construction across the United States, while other Facebook data servers are housed in Denmark, Sweden and Ireland, and another is under construction in Singapore 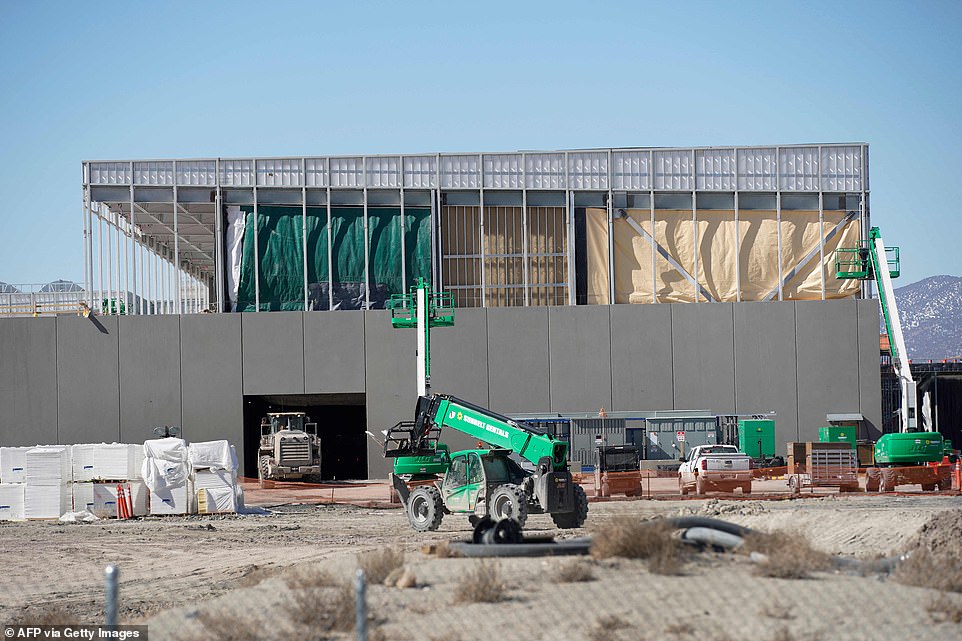 Taking shape: Construction vehicles sit by the wall of the data center in Utah, where Facebook has not said how much data will be stored but where an NSA data center elsewhere in the state is thought to store millions of trillions of bytes

Facebook built its first data center in Prineville, Oregon, where the first 300,000 square-foot site opened its doors in 2011 and where Apple also houses some of its servers.

In addition to the Utah project, other data centers are under construction in DeKalb, Illinois; Gallatin, Tennessee; Huntsville, Alabama; Henrico, Virginia; and Newton County, Georgia.

Other sites are already online in Clonee, Ireland; Odense, Denmark; and Lulea, Sweden; while Facebook’s first custom-built data farm in Asia is currently under construction in Singapore.

At Eagle Mountain, some 1.5million square feet of storage capacity is already under construction, according to media reports, in addition to the further expansion announced in February.

According to the Deseret News, Facebook hopes to switch the servers online before the end of 2021 with two of the three buildings said to be nearing completion. 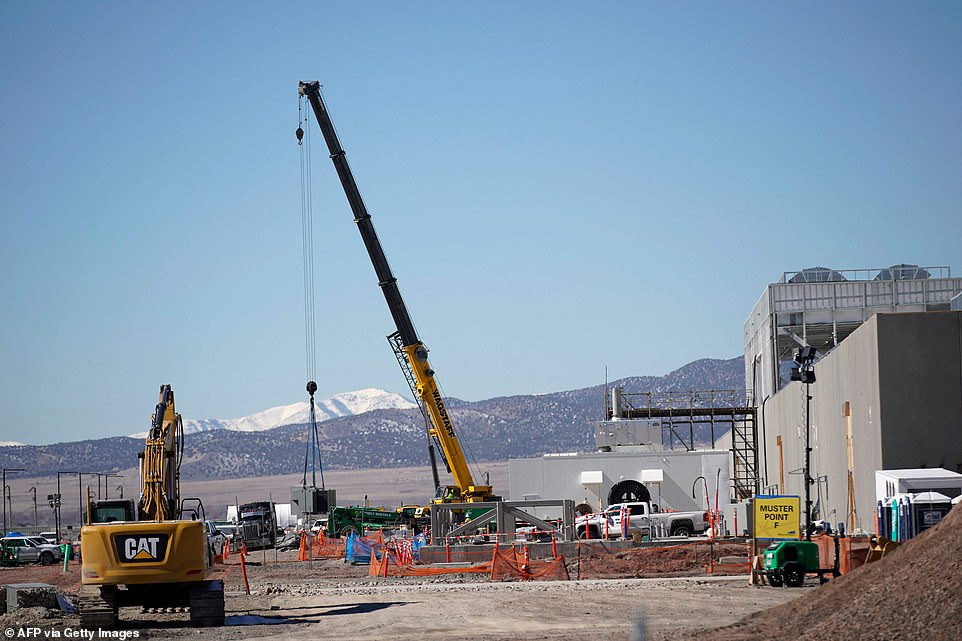 In operation: A crane works by the side of an under-construction building at the Eagle Mountain site in Utah which will store some of Facebook’s servers but is expected to require only a small number of staff to operate it when finished 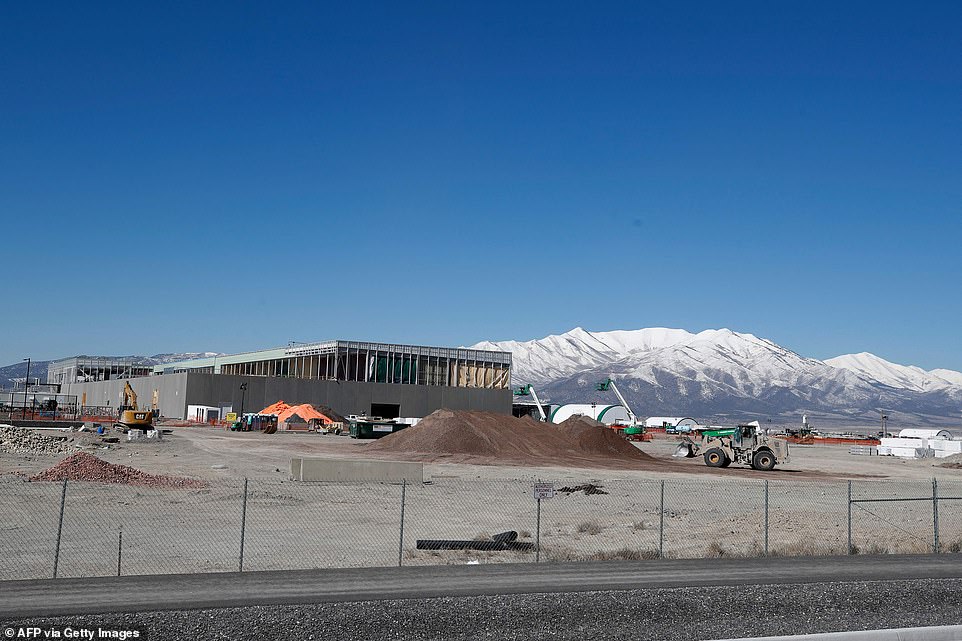 Perimeter: A view of the Eagle Mountain site where construction began in 2018 and where Facebook hopes to switch some of its servers online before the end of 2021, before a further expansion gets underway 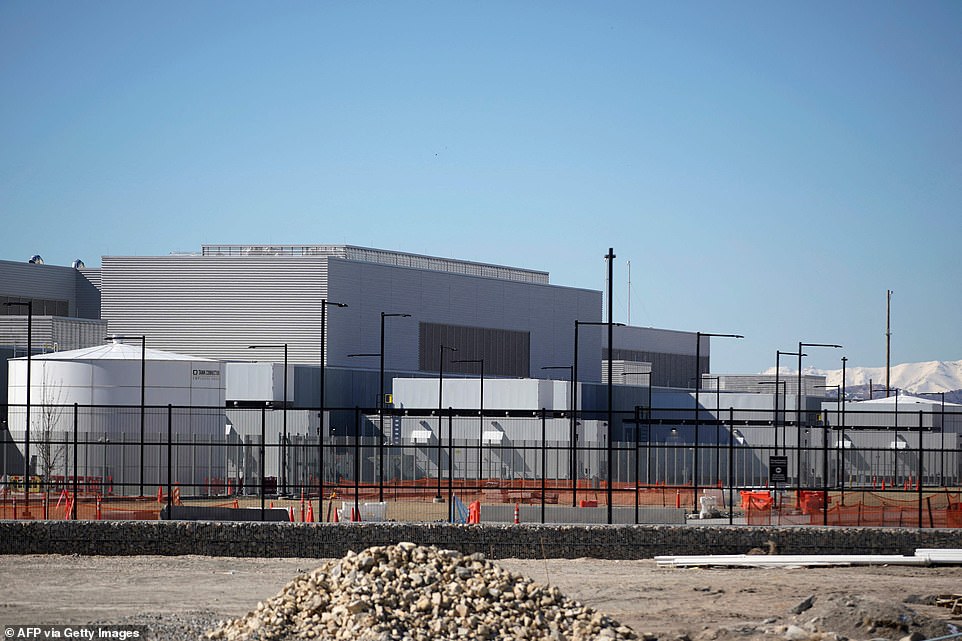 In place: Construction began in 2018, with 12,000 tons of steel and 100,000 cubic yards of concrete being hauled into place to put together three buildings which Facebook says will eventually be solar-powered

While Facebook has not said how much data will be stored there, a similarly-sized NSA data center elsewhere in Utah is thought to house multiple exabytes of data – each one worth a million trillion bytes.

Facebook is quicker to boast of its green credentials, saying the plant will be powered entirely by solar energy generated in Utah and saying it has invested in a project to restore water to the Provo River.

It also touts its support from local politicians, with Utah’s Republican governor Spencer Cox praising the tech giant for bringing a ‘tremendous boon to the local economy’.

But while Facebook says 1,500 workers will be on site ‘at peak’, it is expected that only small numbers of staff will be required to operate the massive data farm once it is complete.

And Facebook’s data storage has long been under scrutiny by other politicians, while the site has also been embroiled in other controversies over election disinformation and hate speech. 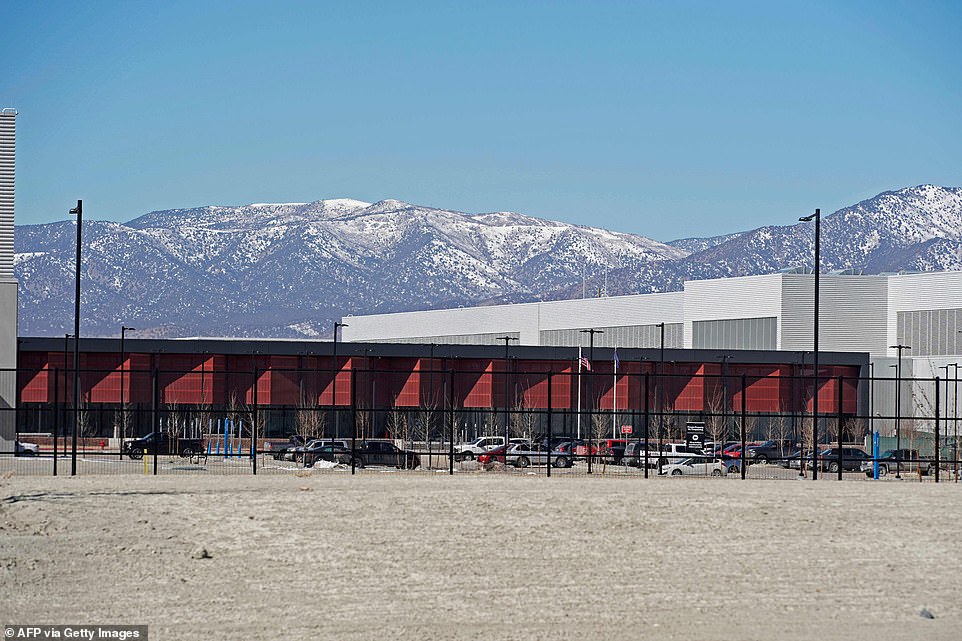 Parking lot: Security personnel check in a truck at the entrance of a completed section of the Facebook data center in Utah 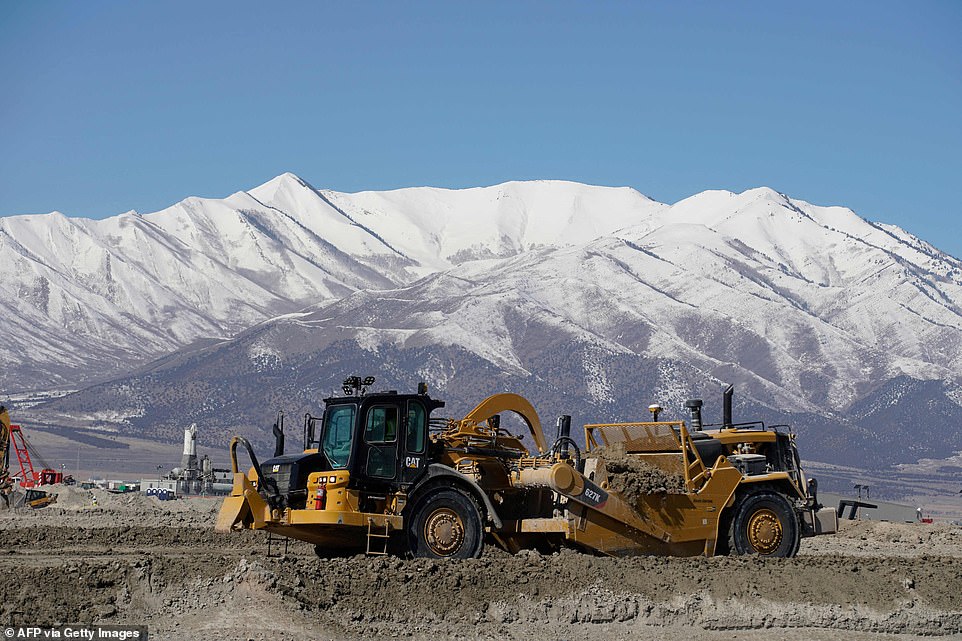 Heavy equipment: A digger at the site of the plant which Facebook says will eventually be expanded by 900,000 square feet 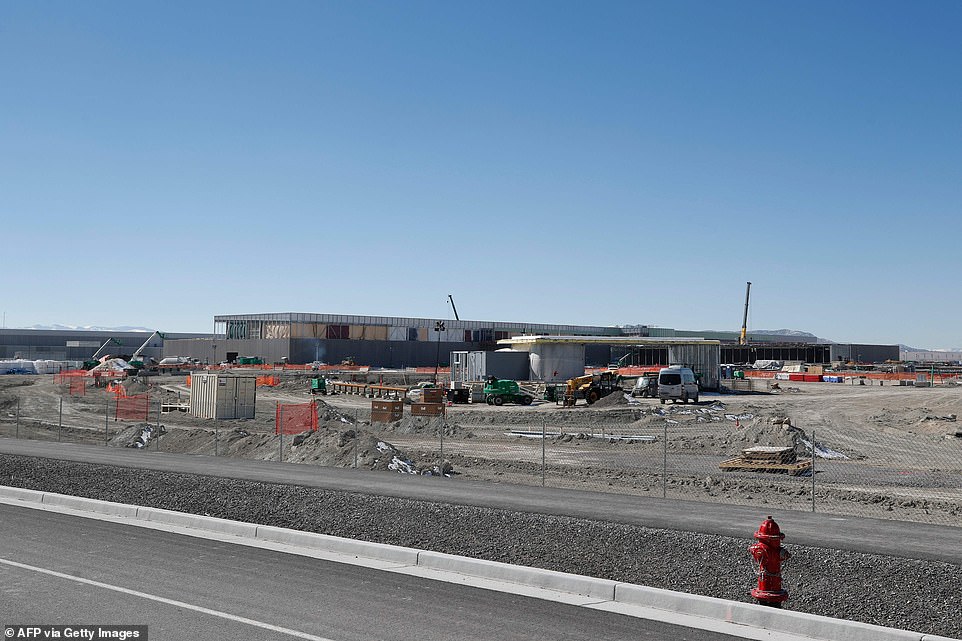 Footprint: Facebook is transforming the landscape in Utah – but boasts of its green credentials by saying the plant will be powered entirely by solar energy generated in the state