Flights have begun taking off across the Tasman, allowing people to travel freely between Australia and New Zealand for the first time since March last year.

Abigail McKinstry and Jack Drummond were among the first to take advantage of the travel bubble. They were waiting at Melbourne Airport on Monday morning for their 10.35am flight to Christchurch. 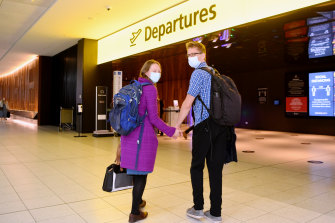 Abigail McKinstry and fiance Jack Drummond prepare to depart Melbourne to fly back to New Zealand to get married after a long wait for flights to resume.Credit:Justin McManus

They are getting married in Dunedin on April 24.

Abigail from New Zealand and hasn’t seen her family for almost a year and a half. Jack was raised in Melbourne.

For religious reasons, they were not living together under Melbourne’s lockdowns.

“We’re Christians, so we don’t live together until we’re married, which is why it’s been a huge deal for us, because we’ve had to wait,” Ms McKinstry said.

They did, however, see each other under the intimate partner bubble provision. 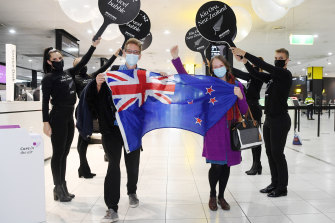 Jack Drummond and Abigail McKinstry were on one of the first flights out of Melbourne to New Zealand on Monday morning.Credit:Justin McManus

They plan to spend three weeks in total in New Zealand, including a honeymoon on the South Island.

“We’re doing all the touristy areas,” Ms McKinstry said. “It’s going to be so good because there’s going to be hardly any tourists there, it’ll be so peaceful and tranquil.”

Asked whether she believed her family was likely to let her leave at the end of the three weeks, she said: “they’ve bought a puppy, so they’re definitely trying to bribe me into staying in New Zealand.”

Geoff Howland, his partner Juliet Messent and their children Emilia and Fletcher were flying out to Christchurch to see their family for the first time in over a year. 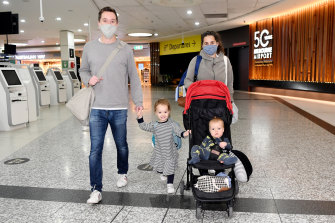 Geoff Howland and partner Juliet Messent with kids Emilia and Fletcher were flying home to New Zealand so their loved ones could meet 10-month-old Fletcher for the first time.Credit:Justin McManus

“He wasn’t around then,” Mr Howland said pointing to 10-month Fletcher. “So I’m looking forward to handing him over to the grandparents and taking a bit of a break.“

“It’s been tough – when you can’t go, it makes you miss it a little bit more.“

With her maternity leave coming to an end soon, Ms Messent said she was eager to get across as soon as possible. But the two weeks in hotel quarantine they would have had to endure until now was too much to contemplate.

While Australia has been open to New Zealand since October, it has not been possible until today to fly in the other direction without going into 14 days of hotel quarantine.

Airlines have jumped at the opportunity to reboot their mothballed international operations, scheduling hundreds of flights each week across the Tasman in what the hope will be the first of several “bubbles” that gradually reopen Australia’s border.

Qantas and Jetstar have scheduled around 80 per cent of their pre-COVID capacity across the Tasman from Monday while Air New Zealand will be closer to 50 per cent.