Nairobi, Kenya: A senior Ethiopian military official has confirmed the presence of Eritrean security forces in the deadly conflict in his country’s northern Tigray region, contradicting the Ethiopian government’s denials.

The United States last month believed Eritrean troops were active in Ethiopia. It said it was a “grave development” as people fleeing the Tigray region alleged that Eritrean forces were involved in the fighting, targeting and abducting Eritrean refugees from camps near the Eritrean border as well as scores of Tigray residents. The fugitive Tigray leader also has alleged Eritrea's involvement. 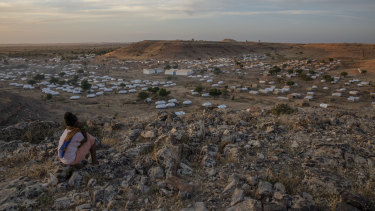 A Tigray girl sits atop a hill overlooking the Umm Rakouba refugee camp, hosting people who fled the conflict in the Tigray region of Ethiopia, in Qadarif, eastern Sudan.Credit:AP

Eritrea, described by rights groups as one of the world’s most repressive countries, is a bitter enemy of the fugitive Tigray government, which once dominated Ethiopia’s government but was sidelined after Abiy took power and now sees his rule as illegitimate. Ethiopia’s government calls the Tigray leaders criminals.

The comments by Major General Belay Seyoum, leader of the Northern Command of Ethiopia’s defence forces, were published by the local Addis Standard magazine along with a video of him speaking to residents of the Tigray capital, Mekele, late last month.

“An alien army we didn’t want came in,” Belay said in the translated remarks. “We know the problems that are being raised, it’s painful, but who let them in?” They were not welcome, he added: “My conscience does not allow me to say, ‘Eritrean army, come and help us!’ We can solve our own problems on our own.” 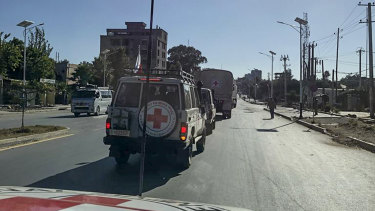 Vehicles of the International Committee of the Red Cross (ICRC) drive along a street during a mission to deliver medical assistance to the region’s main hospital in Mekele, capital of the Tigray region, in Ethiopia, last month.

A senior Ethiopian official, Redwan Hussein, did not immediately respond to a request for comment as the country celebrated the Orthodox Christmas holiday. Eritrea's information minister has not responded to requests for comment on the issue.

The involvement of Eritrean forces in a region where nearly 100,000 Eritrean refugees shelter in camps has been a major source of alarm for humanitarian workers and others. Two of the refugee camps remain virtually unreachable after the conflict swept through. At least five humanitarian workers were killed.

Thousands of the Eritrean refugees fled to the capital, Addis Ababa, and Mekele, but Ethiopia’s government sparked further alarm last month when it said it was putting the “misinformed” refugees on buses and returning them to the camps. The UN refugee agency said it wasn’t informed in advance and said any forced return would be “absolutely unacceptable”.

The UN refugee chief, Filippo Grandi, last month said that “over the last month we have received an overwhelming number of disturbing reports of Eritrean refugees in Tigray being killed, abducted and forcibly returned to Eritrea. If confirmed, these actions would constitute a major violation of international law.”

No one knows how many thousands of people have been killed in the Tigray conflict that erupted on November 4, and the UN and other humanitarian organisations still seek full and unimpeded access to a region that for weeks was starved of food, medicines and other supplies after transport links were cut.

Verifying conditions inside Tigray remains challenging as communications return and as Ethiopian authorities detain some journalists or deny their travel to the region.