Energy bills will rise by nearly £100 from TOMORROW as 15m households on default tariffs face average charge of £1,138 a year after Ofgem allowed suppliers to pass on rising cost of gas and electricity to customers

Energy bills will rise by nearly £100 for 15 million households from tomorrow after Ofgem said suppliers could pass on the cost of rising gas and electricity prices to consumers.

The regulator announced in February that its price cap for the 11 million British households that are on their supplier’s default tariff could rise by £96 to £1,138 from April 1.

A further four million households with pre-payment meters could see their bills jump by £87 to £1,156.

Consumers have been urged to shop around for the cheapest deal since the increase was announced.

Ofgem’s decision followed an additional £23 rise that energy suppliers have been allowed to charge customers for bad debt.

During the pandemic, firms have struggled to get some households to pay their bills, so Ofgem decided it had to allow the suppliers to spread that cost across the UK. 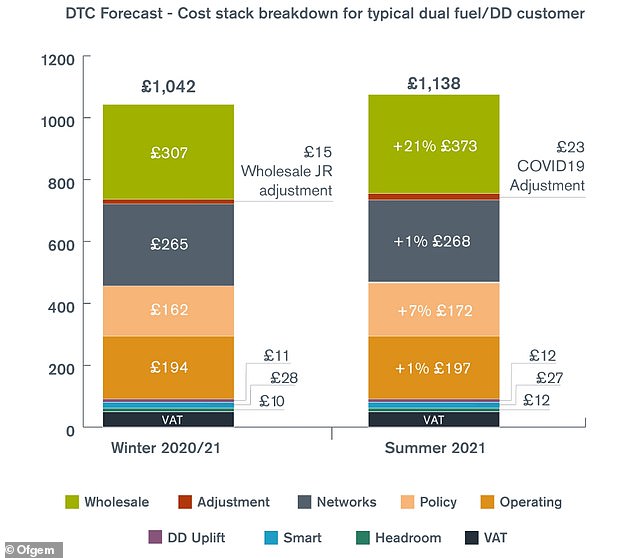 Energy regulator Ofcom said that its price cap for 11 million homes across Britain that are on their supplier’s default tariff could rise by £96 to £1,138 from tomorrow 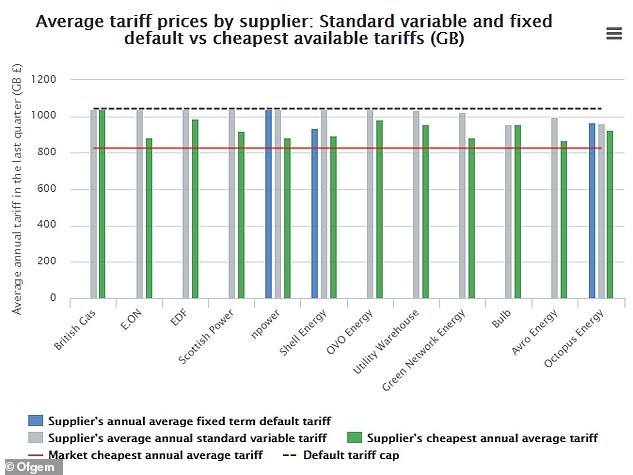 What do the changes mean for consumers?

Ofgem said that its price cap for Britain’s 11 million households that are on their supplier’s default tariff could rise by £96 to £1,138 from April 1.

A further four million households with pre-payment meters could see their bills jump by £87 to £1,156.

It is on top of an extra £23 rise that energy suppliers have been allowed to charge customers for bad debt.

The price cap is a cap on a unit of gas and electricity, with standing charges taken into account. It is not a cap on overall energy bills, which will still rise or fall in line with energy consumption.

The £1,138 per year level of the cap is based on a household with typical consumption on a dual electricity and gas bill paying by direct debit.

Customers struggling to pay may be eligible for schemes such as payment breaks or suspending credit meter disconnections.

The latest increase more than wipes out the gains that consumers made in October, when the price cap dropped by £84 to a record low since the policy was introduced in January 2019.

When the rise was announced, Ofgem chief executive Jonathan Brearley said: ‘Energy bill increases are never welcome, especially as many households are struggling with the impact of the pandemic.

‘We have carefully scrutinised these changes to ensure that customers only pay a fair price for their energy.

‘The price cap offers a safety net against poor pricing practices, saving customers up to £100 a year, but if they want to avoid the increase in April they should shop around for a cheaper deal.’

Ofgem reviews and changes the price cap once every six months.

Speaking to the BBC in February, Mr Brearley argued that it would be better to make a change now when the country is heading into the summer, a time when energy usage is lower, than in October, ahead of winter.

However, Citizens Advice acting chief executive Alistair Cromwell called the increase ‘a heavy blow to a lot of households’  and said it would come as benefits are also slashed for many.

‘For many people on Universal Credit it will come at the same time as the £20 a week increase to the benefit is set to end,’ he added.

‘With a tough jobs market and essential bills rising, now is not the time for the Government to cut this vital lifeline’.

He added: ‘With the rise in the energy price cap, many will have to pay more and rightly expect a decent service. Suppliers must step up to give their customers what they deserve.

‘Everyone should consider whether they are getting value for money from their supplier – paying more doesn’t always mean you will receive a better service.

‘Don’t put up with it if it’s not good enough. Shop around if you can.’ 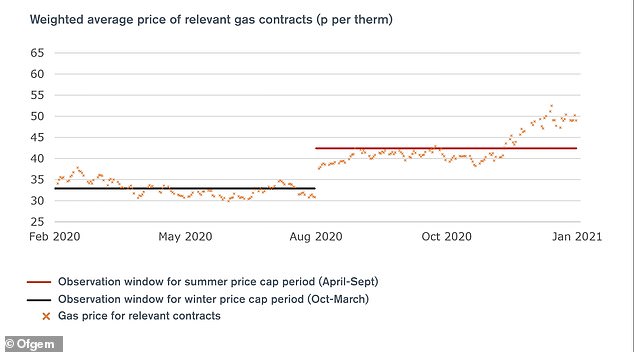 Emma Pinchbeck – chief executive of Energy UK, a trade body for energy suppliers – said the price cap is set in a way intended to be fair for both customers and firms.

She added: ‘Today’s rise reflects that the cost of buying energy – by far the biggest part of the bill – has risen significantly over the last few months.

‘It also includes a greater allowance for debt given the difficulties many customers are facing in paying bills at present.’

It comes as unemployment hit 1.7 million in January and 4.7 million people are on furlough.

Ofgem reviews and changes the price cap once every six months.

The £1,138 annual cap is calculated based on the usage of an average household. Energy suppliers are required to price below that cap, with most setting prices just a couple of pounds under.