Colorado Parks and Wildlife are asking the public for help in locating a bull elk who has had a rubber tire stuck around his neck for more than a year.

On Monday, the organization shared footage from one its trail cameras which showed the animal wandering through the Arapahoe-Roosevelt National Forest with the tube trapped over its head.

Rangers say the elk has been spotted on surveillance footage several times in the past 12 months, and they now fear for its livelihood if the tire is not removed.

The elk is believed to still be quite young, and experts say he may soon struggle to breathe with the tube trapped around his neck.

‘As he continues to grow he is not going to have the room that he has now to eat freely, to breathe and drink,’ CPW spokesperson Jason Clay told Fox 31.

The tire could be mistaken as a sign of aggression to other wild animals.

‘Worst-case scenario is he could die because he is fighting with another bull elk,’ Clay explained.

Sadly, the CPW spokesperson says its not unusual for rangers to discover elk with different objects stuck around their antlers and necks.

‘We see it too often — whether it’s, you know, a hammock caught up in it, Christmas lighting, roping, tire around its neck. Unfortunately, it happens quite a bit here in Colorado,’ he stated.

In recent months, the elk with the tire around its neck has been spotted on trail camera close to the town of Conifer, and the CPW are urging locals to immediately contact them if they spot the animal. 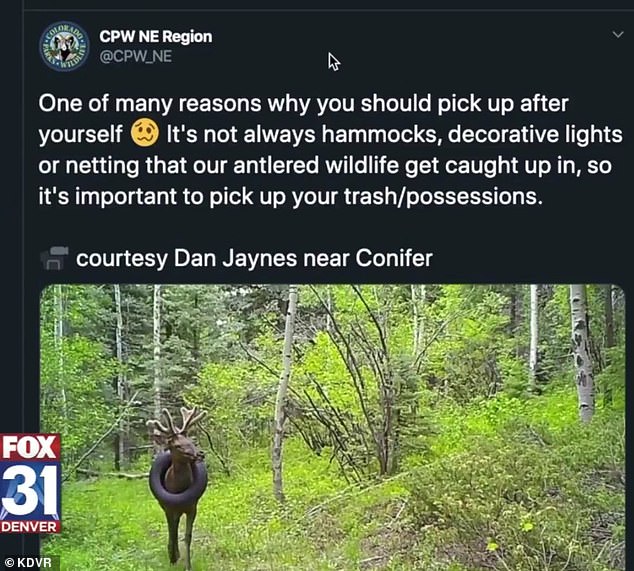 They are warning the public not to attempt removing the tire themselves.

Footage of the elk upset many on social media.

‘So sad that people treat our parks and recreation (State and National) areas like they are dumping zones to throw their trash without any regard to wildlife and vegetation in the area. I so pray that elk is found so the tire can be removed from his neck,’ one wrote. 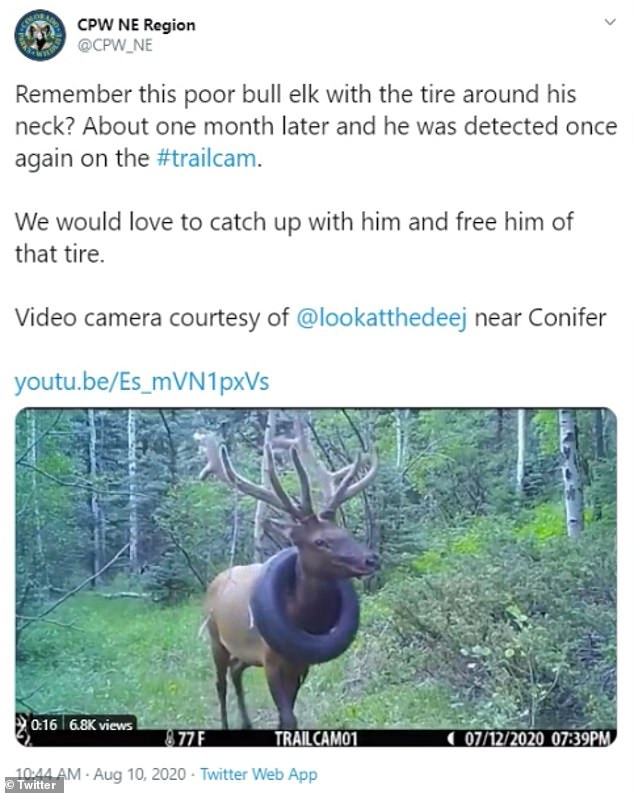 Footage of the elk upset many on social media, who are worried for its wellbeing