Are these the facts that gave Boris Johnson pause for thought? As Omicron cases dip in London after reaching record highs last week, ELEANOR HAYWARD examines the key questions about how we are coping with the latest Covid variant

Trees are up in living rooms across the country, with fridges stocked full of festive food. But for days, the nation’s plans have been on ice.

And while Boris Johnson finally ruled out cancelling celebrations for the second year running last night, he cautioned: ‘Naturally we can’t rule out any further measures after Christmas.’

But the Prime Minister explained there was not enough evidence at the moment to justify stricter controls, and cited doubts about the severity of Omicron, uncertainty about hospitalisation rates, and what the impact of the vaccine rollout might be.

He promised to watch the data – and act if necessary.

The public, though, has so far been denied the full picture: the Government has refused to give any information about the 14 who have died from Omicron, whether they have underlying health conditions and, crucially, whether they are unvaccinated.

And the issue of vaccination is critical – London is the worst hit area of the country, and it has by far the lowest vaccination rates. Coincidence?

Here are the key questions as we edge towards December 25… 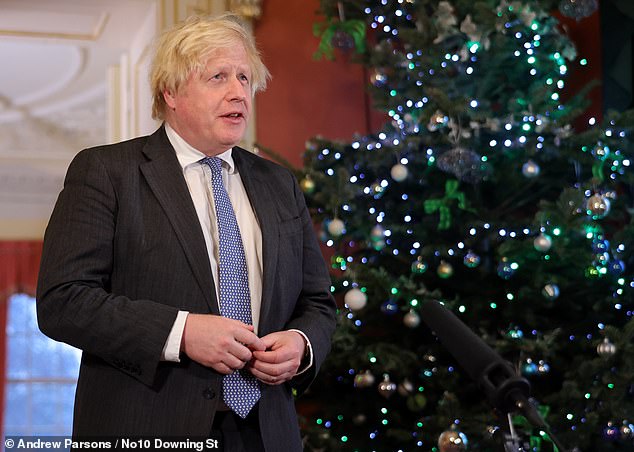 While Boris Johnson finally ruled out cancelling celebrations for the second year running last night, he cautioned: ‘Naturally we can’t rule out any further measures after Christmas’

HOW QUICKLY IS OMICRON SPREADING?

Whisper it, but the ferocious surge in cases already appears to be levelling off. Yesterday 90,629 Covid infections were confirmed across the UK. This is twice the level of a fortnight ago, but down on Friday’s 93,045.

After the first Omicron case was detected in the UK on November 26, the variant quickly became dominant and cases doubled roughly every two days.

Scientists expected this ‘eye-wateringly high’ exponential growth to continue – warning of up to one million daily infections by New Year’s Eve. In fact, new infections have been stable for nearly a week.

Chris Whitty, Chief Medical Officer, said that the Omicron wave will ‘peak quite fast’ as it is so infectious. Cases are already falling in South Africa. It arrived quickly and is fading fast.

WILL ‘LOCKDOWN BY STEALTH’ SLOW SPREAD?

Professor Whitty last week urged the public to ‘think carefully’ about festive socialising and ‘prioritise interactions that really matter to them’. Although his dire warnings prompted fury from Tory MPs, millions of Britons heeded his advice – essentially putting themselves into lockdown.

High street traders say footfall is down 60 per cent, and across the country pantomimes and office parties have been called off. In London half of West End theatres, along with dozens of pubs and restaurants, have closed.

While this has led to a ‘nightmare before Christmas’ for the hospitality industry, the shift to more cautious behaviour has slashed opportunities for the virus to spread.

WHY ARE LONDON RATES SO IMPORTANT? 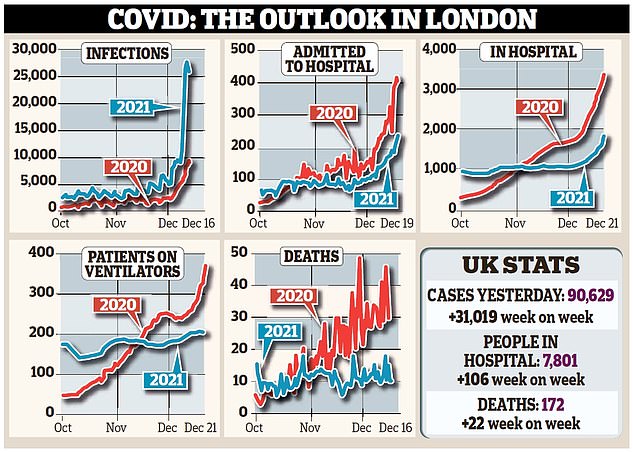 Omicron took off quickly in London, and the capital’s high infections may well be linked to its low vaccination rate – one in three Londoners is completely unvaccinated, three times higher than the national average.

Its infection rate of 1,455 cases per 100,000 people is twice the national average. Ministers are closely monitoring data and, so far, signs are positive. Cases are dipping in London after reaching record highs last week. Hospital admissions remain low compared to previous peaks, and the number in intensive care remains flat.

Yesterday some 245 patients were admitted in London, compared to more than 900 a day in January. There are currently 1,904 Covid-19 patients in hospital in the city.

This is up 41 per cent from last week, but less than one quarter of the 7,917 recorded on March 2. And about half of this weekly increase is due to more ‘incidental’ admissions of patients who test positive after going to hospital with a different illness. Cambridge University statistician Professor Sir David Spiegelhalter said: ‘It’s not looking quite as bad as it was in terms of the speed of increase [of admissions].

‘Around half the extra admissions in London… had Covid anyway, which vast numbers of people in London now do, and then they found out they had Covid once they’d gone to hospital.’

Michael Bartley, a critical care matron at King’s College Hospital in the capital, said in an interview this week ’80 to 90 per cent’ of Covid patients in the beds he was responsible for were unvaccinated.

WILL HOSPITAL RATES BE LOWER FOR OMICRON? 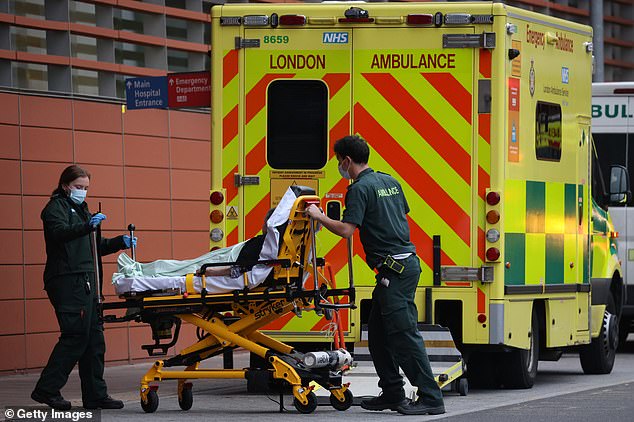 Paramedics take a patient to the emergency department at The Royal London Hospital in Whitechapel, London, on December 19

The Prime Minister yesterday highlighted ‘continuing uncertainty about the severity of Omicron and the hospitalisation rate’. But vaccination means a smaller proportion of total cases are likely to need hospital treatment compared to earlier waves.

Nine in ten of the most severely ill Covid patients are unvaccinated. The NHS is also rolling out antiviral drugs that are expected to prevent thousands of hospitalisations this winter. And there are hopeful signs that Omicron is intrinsically less severe than previous variants.

Data from South Africa suggests patients are 29 per cent less likely to end up in hospital and symptoms are milder. Hospital admissions in South Africa are just 55 per cent of their previous peak, despite case numbers being similar.

HOW IS THE NHS COPING?

Waiting times and ambulance delays are at record highs as hospitals struggle to clear the Covid backlog. Existing problems are being exacerbated by staff shortages due to Omicron, with nearly one in ten staff in London isolating. NHS chiefs in London say hospitals are likely to be ‘overwhelmed due to rising Covid demand in the next two to three weeks’.

However, the number of Covid patients is low compared to previous peaks. There are currently 7,801 patients in hospital with the virus across the UK , compared to 20,000 this time last year and almost 40,000 in January. Winter flu has not taken off as feared and is below pre-pandemic years.

There have so far only been 14 confirmed deaths from Omicron in the UK. Weekly deaths from Covid have fallen to a two-month low as the vaccine rollout saves tens of thousands of lives, though it is true we will need to wait another several weeks to know what the impact of Omicron is on the death toll. Yesterday 172 fatalities were recorded in the UK, compared to more than 1,000 at the peak.

HOW WELL DO VACCINES WORK AGAINST OMICRON? 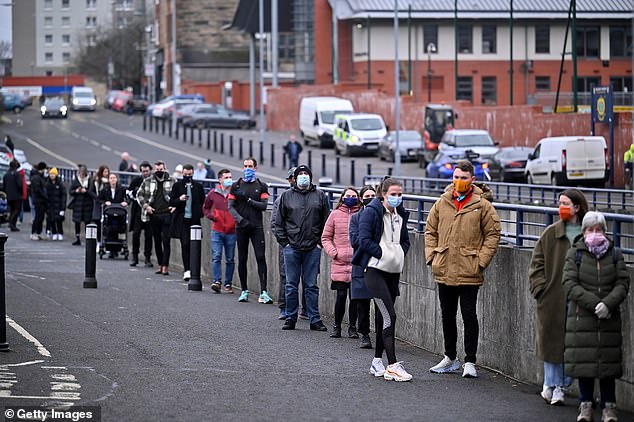 Vaccine efficacy has been blunted but they still achieve their primary aims of preventing hospitalisation and death. Two doses are no longer enough to stop infection.

This is because the sheer number of mutations on Omicron’s ‘spike’ protein allows it to evade antibodies and infect cells. But the immune system’s T-Cells, which kill infected cells and prevent severe disease, still work well.

Boosters have never been more important. They top protection against infection back up to 70 per cent – and even higher for hospitalisation and death.

An astonishing 52 per cent of Britons over the age of 12 have now had three doses – making it one of the best-placed countries in the world to fend off Omicron.