Amid warnings by experts, Russia steps up vaccine development and promises to deliver it to the Philippines. 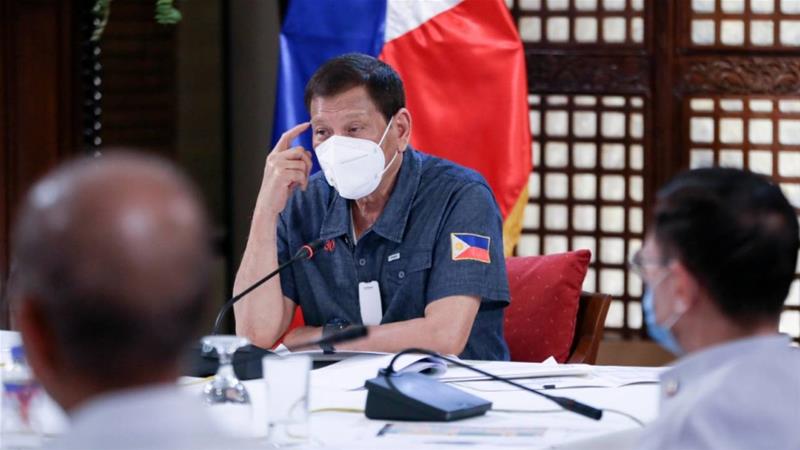 Philippine President Rodrigo Duterte has lauded Russia’s efforts to develop a coronavirus vaccine and is himself willing to participate in trials, as he welcomed a supply offer from Moscow that he expects will be free of charge.

Russia expects regulatory approval for a potential COVID-19 vaccine this month and is ready to provide it to the Philippines, or team up with a local firm to mass-produce it.

The Philippines’ number of cases is among the highest in Asia, rising to 136,638 on Monday after a record daily jump of 6,958 cases.

“I will tell President (Vladimir) Putin that I have huge trust in your studies in combating COVID and I believe that the vaccine that you have produced is really good for humanity,” Duterte said on television late on Monday.

The frenetic global race to develop a COVID-19 vaccine has raised concerns that speed and national prestige could compromise safety.

To allay public fears, Duterte offered to be a guinea pig when the vaccine arrives and said: “I can be the first they can experiment on.”

His office on Tuesday said the Philippines stands ready to work with Russia on vaccine trials, supply and production.

In July, Duterte made a plea to his Chinese counterpart to make the Philippines a priority if China develops a vaccine, amid concern in developing countries about availability.

This month, he restored a strict lockdown in and around the capital Manila for an initial two weeks, heeding the plea of medical front-liner workers for a “timeout” amid a surge in infections during a period when restrictions were eased.

If the situation becomes a “runaway contagion”, Duterte on Monday vowed to mobilise the military to enforce the lockdown.

The lockdown has been among the world’s toughest, and Duterte’s opponents and rights groups have voiced concern about his security-centred approach and the conduct of the police.

Meanwhile, scientists worldwide are sounding the alarm that the headlong rush could backfire as Russia boasts that it is about to become the first country to approve a COVID-19 vaccine, with mass vaccinations planned as early as October.

“I’m worried that Russia is cutting corners so that the vaccine that will come out may be not just ineffective, but also unsafe,” said Lawrence Gostin, a global public health law expert at Georgetown University.

According to Kirill Dmitriev, head of Russia’s Direct Investment Fund, which bankrolled the effort, a vaccine developed by the Gamaleya research institute in Moscow may be approved in days, before scientists complete what’s called a phase three study.

That final-stage study, usually involving tens of thousands of people, is the only way to prove if an experimental vaccine is safe and really works.

“I do hope that the Chinese and the Russians are actually testing a vaccine before they are administering the vaccine to anyone, because claims of having a vaccine ready to distribute before you do testing, I think is problematic at best,” he said.