The state government has been forced to stump up $48 million in special funding to the Environment Protection Authority to clean up two of Victoria’s worst toxic waste sites.

The taxpayers’ money will pay for the removal of a massive subterranean stockpile of waste in the bush and the rehabilitation of a burned-out recycling facility in Campbellfield after the sites were abandoned by players allegedly linked to the largest illegal waste syndicate in the state’s history. 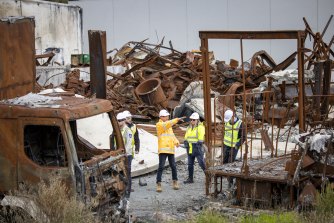 The action comes as the agency’s new chief has pledged there would be “no excuses” in future for his organisation failing to prevent similar environmental harm after it gains sweeping new powers and funding from July 1.

“We’ve asked for these new powers and it’s up to us to use them effectively. There’s no excuses,” Mr Miezis said. “This includes a new power to intervene before an environmental harm is committed in order to stop it.”

The EPA estimates it will cost $8 million and take six months to clean up thousands of tonnes of potentially contaminated debris left over from the industrial blaze that destroyed the Campbellfield premises of Bradbury Industrial Services in April 2019. 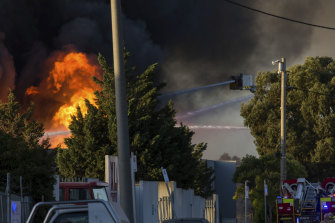 The chemical recycling plant had been illegally stockpiled with two and half times its permitted storage level for highly flammable solvents and other chemicals. The facility had been under the supervision of the EPA and WorkSafe when a workplace accident sparked the fire.

More than 175 firefighters spent four days fighting the blaze, which cost nearly $2 million to extinguish and contain the toxic runoff. The fire site has been left virtually untouched after the company collapsed in mid-2019 with debts of nearly $54 million.

Mr Miezis said that while a special funding allocation from the state government would underwrite the clean up, the agency believed it could recoup some of the $8 million through the eventual sale of the land.

The second, much larger clean up project started by the EPA recently is the removal of millions of litres of chemicals, including highly toxic insecticides, that have been buried on a bush block near the South Australian border. That is expected to cost up to $40 million and take 18 months. 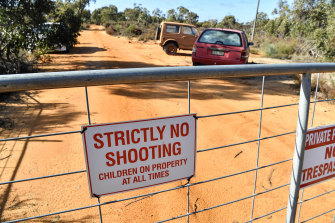 The land in Kaniva that contained the allegedly illegal dump.Credit:Joe Armao

Both properties have been linked to an alleged organised crime syndicate responsible for illegal dumping flammable, explosive, toxic and infectious waste in stockpiles around the state and creating the conditions for two of the worst industrial fires in decades, including the property in Campbellfield.

The EPA is claiming the July 1 deadline will represent a new dawn for the organisation, which has been plagued for years with failures to prevent large-scale contamination incidents, staff departures and allegations of undue political influence in its operations.

Mr Miezis said the EPA had “taken a reputation hit” from the discovery of this type of illegal activity.

“We’ve got to lean into the challenges, own up to the mistakes from the past and learn from them.

“I’m not going to pretend we’re where any of us want to be as an organisation but my clear instructions from the government are — we need and want that EPA to do its job and do its job well.”