Drone ships, more commonly known as unmanned surface vessels (USV), could soon change how we navigate and understand our seas, in a similar way to how aerial drones have changed how we access the skies and view the world we live in.

British-based Sea-Kit International deployed its 12-metre USV Maxlimer for 22 days in the Atlantic Ocean in July and August, mapping 1,000 square kilometres of the seabed.

The original plan was to attempt the first-ever uncrewed trans-Atlantic sea voyage, from Halifax to Plymouth, England, but the COVID-19 pandemic made the logistics impossible.

Instead, the Maxlimer proved its worth on the surveying mission, with all of its movements controlled remotely, using satellite technology, from Sea-Kit’s headquarters in Tollesbury on the east coast of England.

USVs can use a fraction of the fuel of some crewed vessels because there is no need for a bulky crew accommodation structure onboard.

“We were burning about 100 litres or under 100 litres of fuel a day,” said Neil Tinmouth, Sea-Kit’s chief operating officer.

“That’s compared to a normal survey vessel that can burn up to 10 metres cubed of fuel in a given day. So there, you’re looking at one per cent of the fuel consumption.” 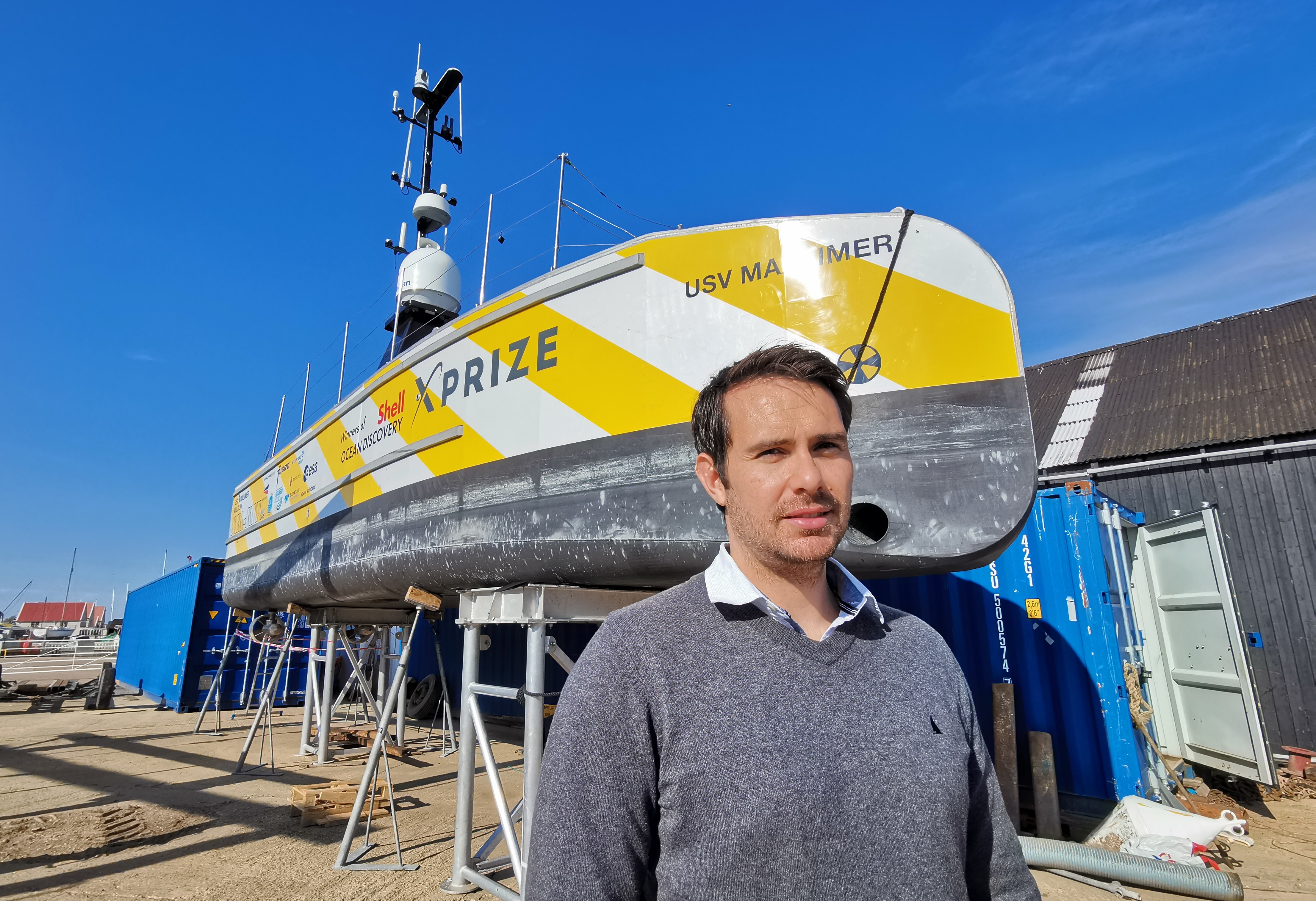 Tinmouth says the fuel comparisons vary, depending on the mission and vessel, but he says the savings go beyond the day-to-day operation of the vessel.

He says compact USVs will mean a lower carbon footprint for ship production, as well as a much lower deployment cost for certain missions.

“When you’re talking about the mobilization of the vessel from, let’s say, the U.K. to the Gulf of Mexico, you have ships steaming at full speed, which burns a lot of fuel,” he said.

On top of that, Tinmouth says operators will not need to fly crews around the world at the start and end of a voyage, thereby reducing further the carbon footprint of missions.

In the short term, he sees USVs like the Maxlimer being used on missions like surveying and inspections of underwater oil and gas infrastructure.

But he believes that in years to come, the technology could be used by short-haul freight shipping, where smaller vessels could significantly increase their efficiency by removing the need for an onboard crew.

The World Shipping Council, which represents the industry, says maritime shipping accounted for 2.1 per cent of annual global greenhouse gas emissions in 2012, which is approximately equivalent to passenger aviation.

The Stockholm Environment Institute has quoted a similar estimate, which amounts to one billion tonnes of greenhouse gases a year.

The change is ‘massive’

Dutch-based geo-data specialist Fugro has ordered two of the vessels, for use on missions in Australia and Scotland.

The first USV is scheduled for delivery in January 2021 and will be used to transport a remotely operated vehicle (ROV) and an autonomous underwater vehicle (AUV), or drone submarine.

The ROV will carry out oil and gas pipeline inspections on Australia’s North West Shelf.

“You’re often talking about a vessel 70, 80 metres in length with 50, 60 people on board working around the clock, with one or more ROVs,” said Ivar de Josselin de Jong, a remote inspection solution director at Fugro.

“(It’s) amazing the direction where we are headed, and that massive change in status quo, and heading to a new way of working.”

However, de Josselin de Jong says the new technology poses complex challenges in how the vessels are managed across the globe.

“At the moment, there’s no regulation in place for uncrewed operations, and Fugro is actively involved with authorities around the globe, actually, to shape these regulations and jointly develop a competence framework for operators,” he said, stressing that although there could be a reduction in shipping jobs, many roles will move to land-based control rooms around the world.

“You need to make sure that the ports authorities and the coast guard — who are responsible for the nearshore vessel movements — that they feel comfortable with what we have put in place.”

Co-ordinating these regulations across the world’s jurisdictions won’t be easy.

“What we are facing now, actually, is this transformation supported by all the technologies that we have at hand at a super high speed, where we need to change that environment in a blink, actually, compared to how it was before.”

Tinmouth says Sea-Kit has put the trans-Atlantic mission on the back-burner for now.

However, another team of maritime pioneers aims to sail an even more advanced, fully autonomous ship across the Atlantic next year.

The Mayflower Autonomous Ship (MAS) had been scheduled to mark the anniversary of the 1620 voyage of the Pilgrim Fathers in September, but like the USV Maxlimer, COVID-19 got in the way.

Instead, the MAS is due to sail from Plymouth, England to Plymouth, Mass., in April 2021.

The project involves the exploration charity ProMare, engineering company MSubs, IBM and the University of Plymouth.

The research vessel will be powered by a hybrid of wind, solar and diesel propulsion systems, and will use artificial intelligence technology to navigate the route.

The futuristic-looking MAS will carry out research on ocean pollution as it travels west.