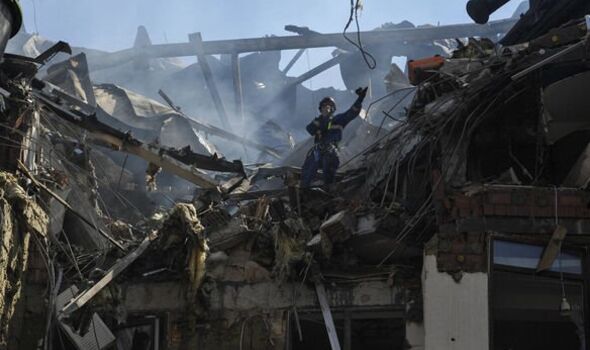 Rescue workers made a desperate search for survivors after the attack hit a nine-story block of flats as residents slept.

Neighbours said the dead man was a father, whose young daughter and wife were both trapped in the rubble until rescuers managed to free them.

A Ukrainian air force spokesman said the strike was carried out with four to six long-range missiles fired from Russian bombers more than 1,000 kilometres away in the southern Russian region of Astrakhan.

They said rockets also struck the central city of Cherkasy, which until now had been largely untouched by Russian weapons, as well as a strategic bridge linking western Ukraine and the eastern battlefields.

In Kyiv last night, emergency workers were continuing to search for survivors among the ruins of the apartment block.

Other residents from the lower part of the building had to be evacuated in their night clothes.

A nursery was also hit in the attack as up to four explosions shook the capital in the first such onslaught on the city in weeks.

Vitali Klitschko, the city’s mayor, relayed a message on the Telegram messaging app.

He said: “They have pulled out a seven-year-old girl. She is alive. Now they’re trying to rescue her mother.”

Air raid sirens at 6am were the first warning most people had, before a series of explosions resounded across the city centre.

One, Alexei, 37, witnessed the attack from his home, where he lives with his wife and children, in a nearby residential neighbourhood.

He said: “The first blast woke me up. When I went outside on the balcony, I saw what looked like a plane, whistling as it came down.”

Altogether, up to four explosions were heard by neighbours. Nearer the scene of the devastation, just a stone’s throw from a Metro station, white smoke could be seen billowing into the otherwise clear blue morning sky. 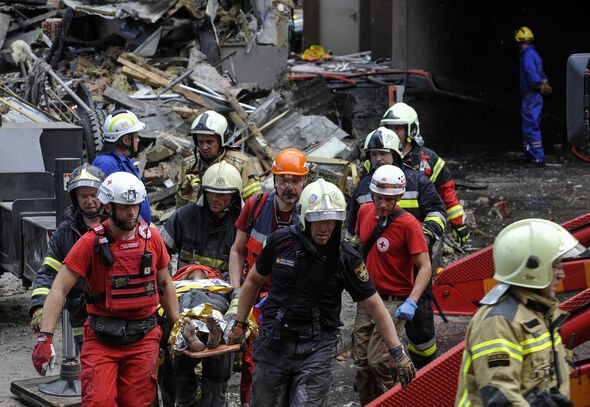 Ushkarchuk, both 18, live in a student dormitory just behind the destroyed block of flats, from where they also witnessed the Russian atrocity.

Yaroslav said: “I heard four blasts, three in a row, and then a fourth, two or three minutes later, followed by an orange fireball above the building.”

“When I saw the strike, I knew it was intentional, directed at a place where people live, like shooting ducks in a barrel.”

Katya added: “Our windows look right out and down onto the building.”

At the scene of the blasts, heavily armed military and police officers cordoned off the entrance to a side street while rescuers and paramedics wearing red boiler suits worked nearby.

A group of armed officers were seen standing guard at the head of the road.

One city official told reporters that the young family – a father, mother and their young daughter, – were sleeping in their flat when the missiles rained down.

The father, they said, was killed, while the daughter was taken to hospital. Her condition was not revealed. The mother was later rescued alive, but was badly injured.

Serhiy and Lena, furniture makers originally from Donetsk, were at the scene trying to get news on friends they have living in the block.

Serhiy said: “They wrote us back that they were alive, but didn’t say much else. So we have come here to take a look for ourselves.”

The stricken block stands next to another hit by a Russian missile on April 30.

The neighbourhood, which includes a now-defunct missile plant, has been hit a total of three times since March.

Meanwhile, Russia’s defence ministry said that over the weekend it used high-precision weapons to strike Ukrainian army training centres in the regions of Chernihiv, Zhytomyr and Lviv.

Yesterday, pro-Russian separatist forces evacuated more than 250 people, including children, from Severodonetsk’s Azot chemical plant. Its surrounding industrial area was the last part of the city held by Ukrainian forces, it was said.

Separatists are now advancing on Lysychansk, the last major city held by Ukraine in Luhansk.

The violence comes as Ukraine was given European Union candidacy status last week.