A CHRISTMAS-mad dad has hit back at neighbours who called his festive lights ‘tacky’  by putting up a 6ft inflatable elf and attaching their mean missive.

Billy Morgan, from Bridgwater, Somerset, decorated his front garden with £220-worth of icicle lights, an inflatable Santa, an inflatable snowman and three projectors on Sunday. 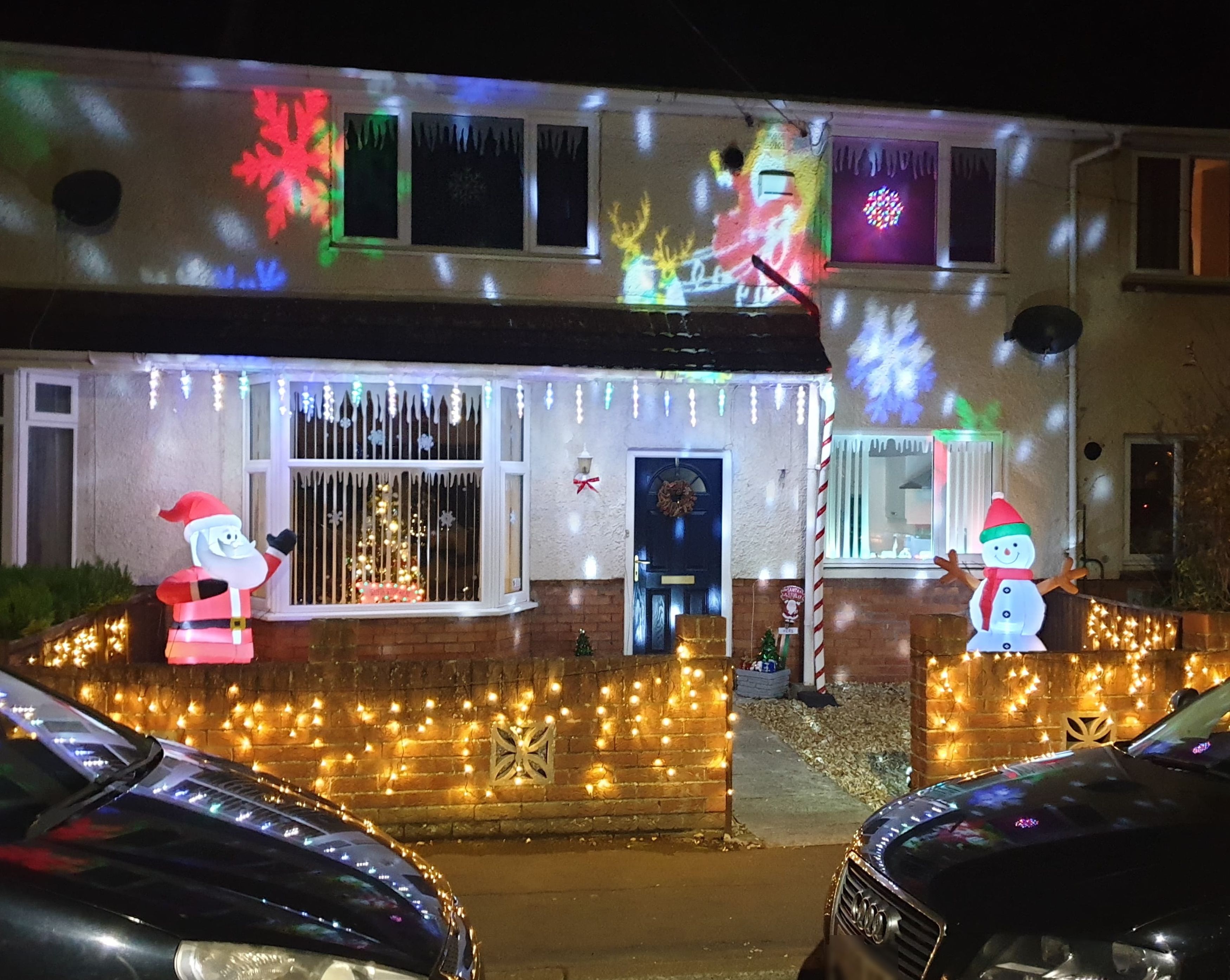 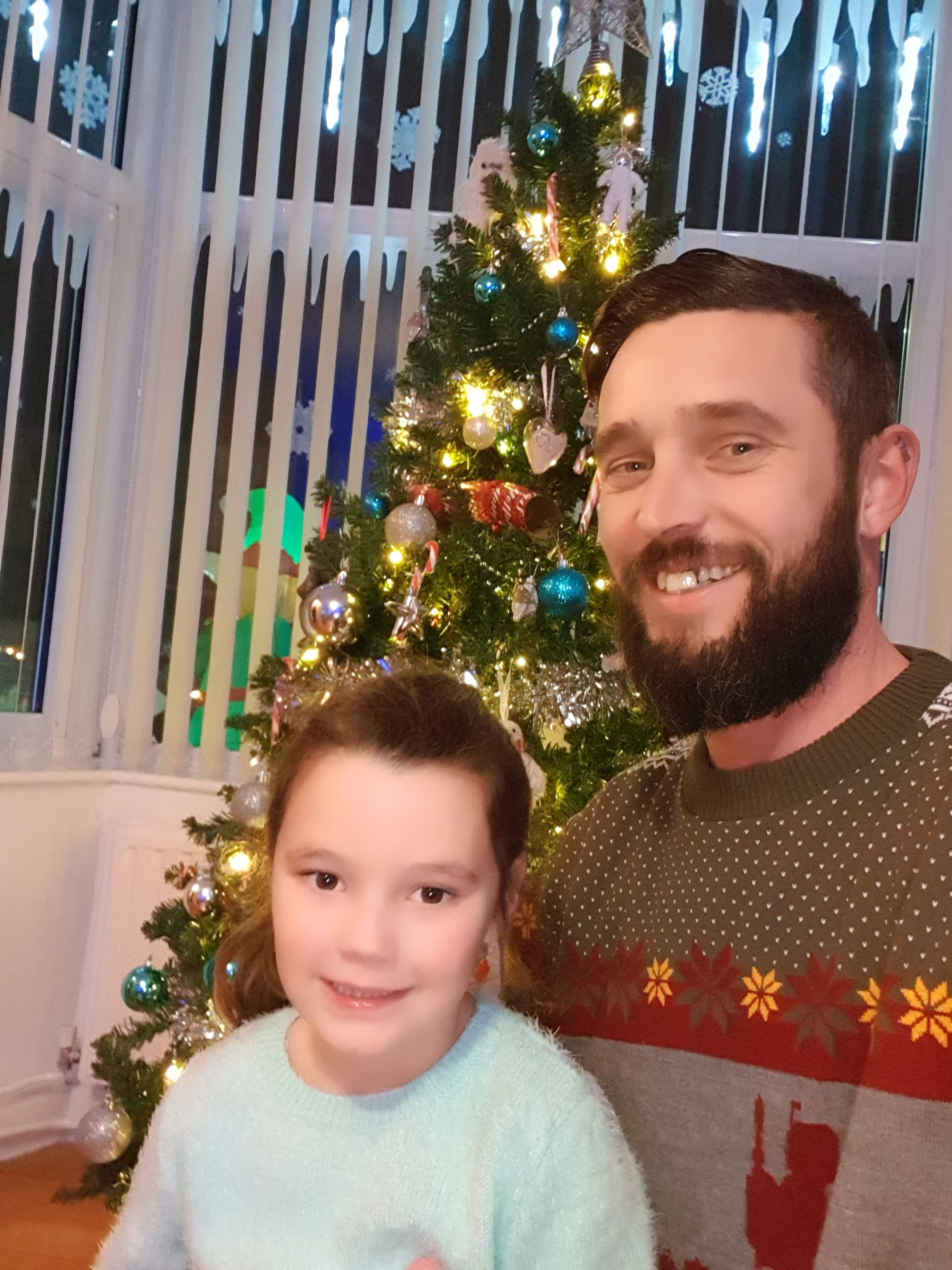 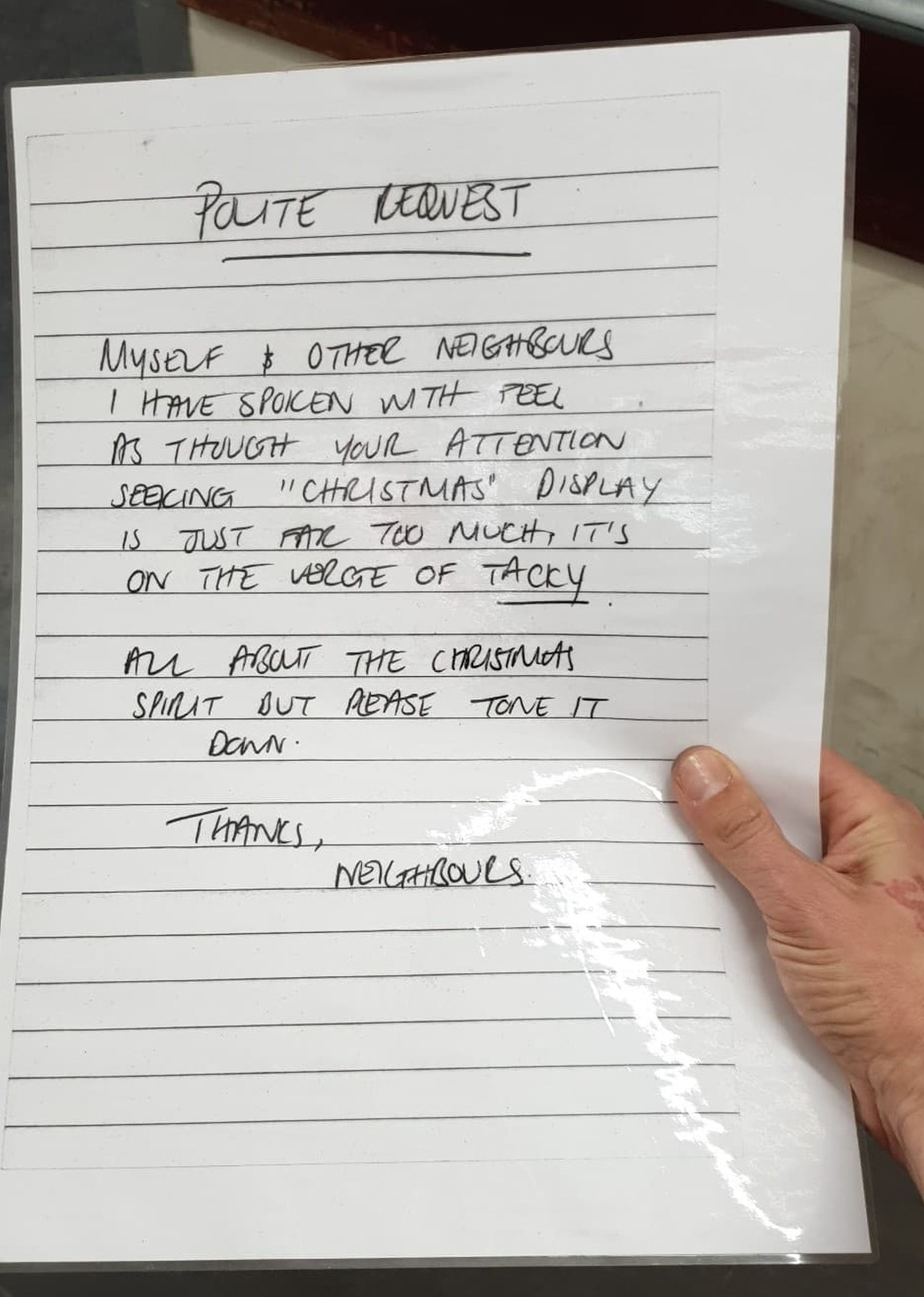 But two days later a hand-written letter, claiming to be from a group of neighbours, blasted the 'tacky, attention-seeking' lights and urged Billy to 'tone it down'.

The 38-year-old dad-of-four blew up their note to A3 size and attached it to a newly-installed inflatable elf so everyone could see what had been sent to them.

Postman Billy, from Somerset, said: "If you put a note like that through my door I'm going to go big or go home, so I decided to get more.

"When we put the lights on after a full day's work putting everything up it was brilliant, it was worth the effort just to see the kids' faces.

"Writing and posting a note through my door like that is a real Scrooge thing to do, it's not in the spirit of Christmas at all."

But the note, written in block capitals, reads: "Polite request. Myself & other neighbours I have spoken with feel as though your attention seeking 'Christmas' display is just far too much, it's on the verge of tacky.

"All about the Christmas spirit but please tone it down.

Billy stocked up on £53-worth of extra items from B&M to ensure the disgruntled 'neighbours' had something else to grumble about as they walked by.

Billy said: "We also bought a 6ft inflatable elf that right at the front gate with a box of candy canes at his feet so if anyone wants to come round they can help themselves.

He added: "It wasn't cheap getting the extra stuff but I was happy to shell out the extra money as I've done a ton of overtime in the last couple of weeks.

"Macy really wanted the elf this year but we were going to wait until next year, so I thought I may as well just get it now.

"Whoever's written the note has done Macy a favour as she's got the elf 12 months early."

Billy shared pictures of his spruced-up terraced home on social media to show pals, he wrote.

Commenters were stunned at the note-writer's apparent lack of festive spirit. 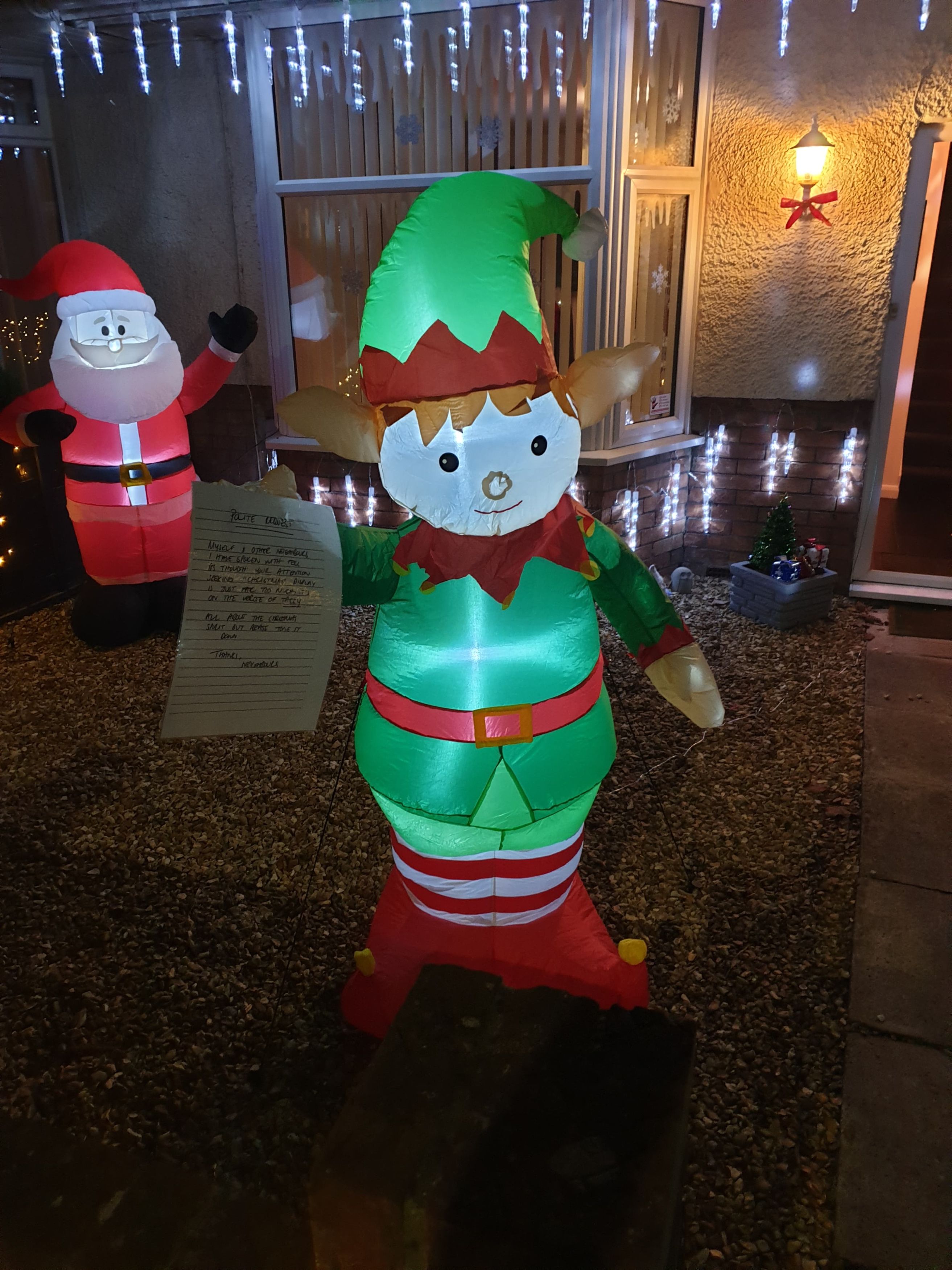 Frank Collins wrote: "Keep up the good work Billy hope you keep adding to your Xmas joy and spreading happiness and joy to all your neighbours and friends and a Happy Christmas to you and your family."

Nicki Berridge commented: "Blimey, what a miserable neighbourhood you live in Bill.

"Next year double up on the "tackyness" then play Xmas music out the bedroom window on a loo."

Jodee Culver Evans wrote: "What mean neighbours you have, and probably only one horrid one hiding behind the “we all feel the same” rubbish.

"Christmas is all about ‘more is more’ so just go for it. Your children are happy, your house looks fab, well done and Merry Christmas."

Billy said: "Writing and sending a letter like that is a real Scrooge thing to do and isn't in the spirit of Christmas at all.

"I would have liked to have seen their faces when the additional lights went up."

He added: "It's certainly not put me off putting lights up in future, I'm going to go in the sales after Christmas and buy lots more for next year." 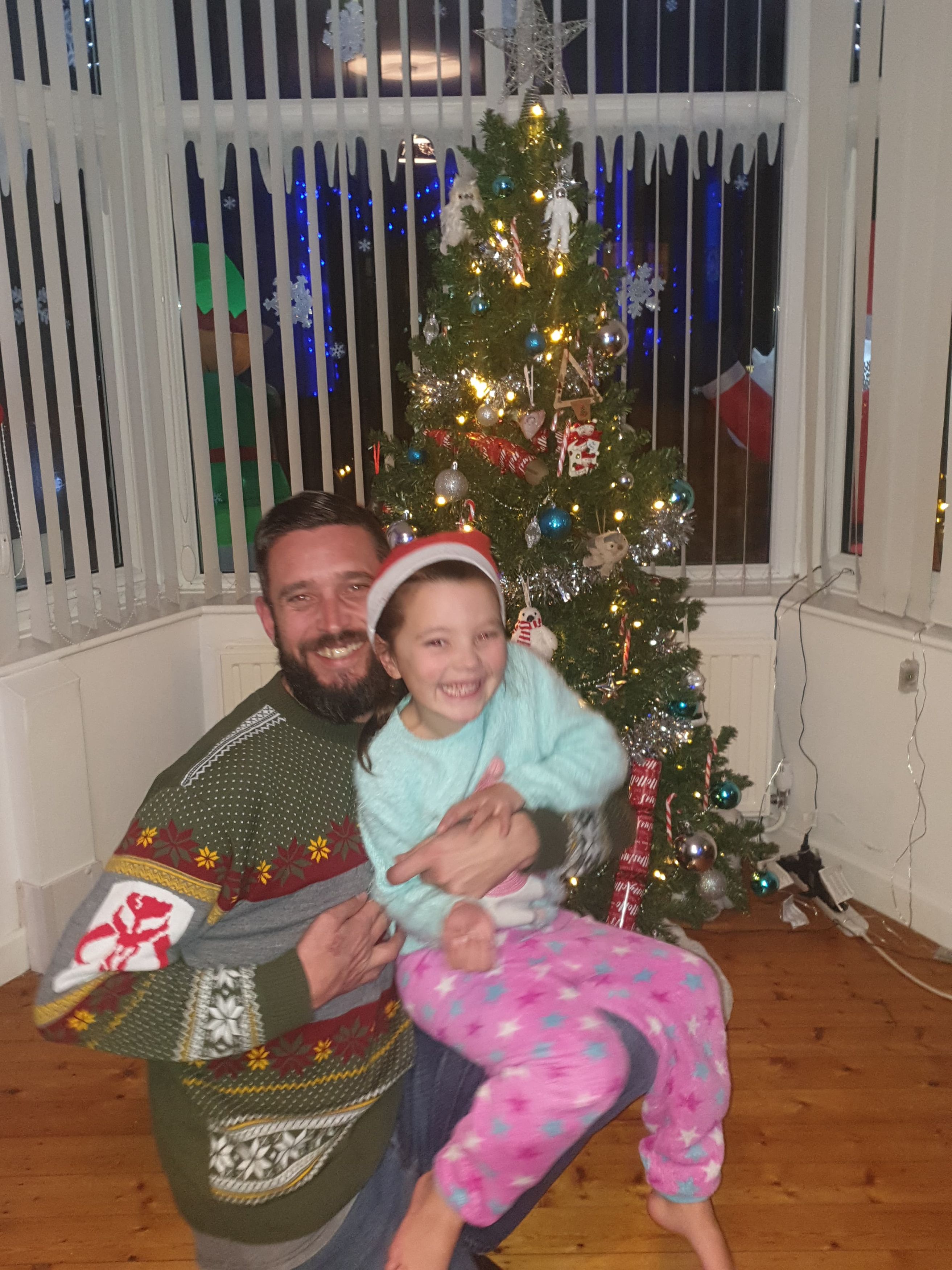 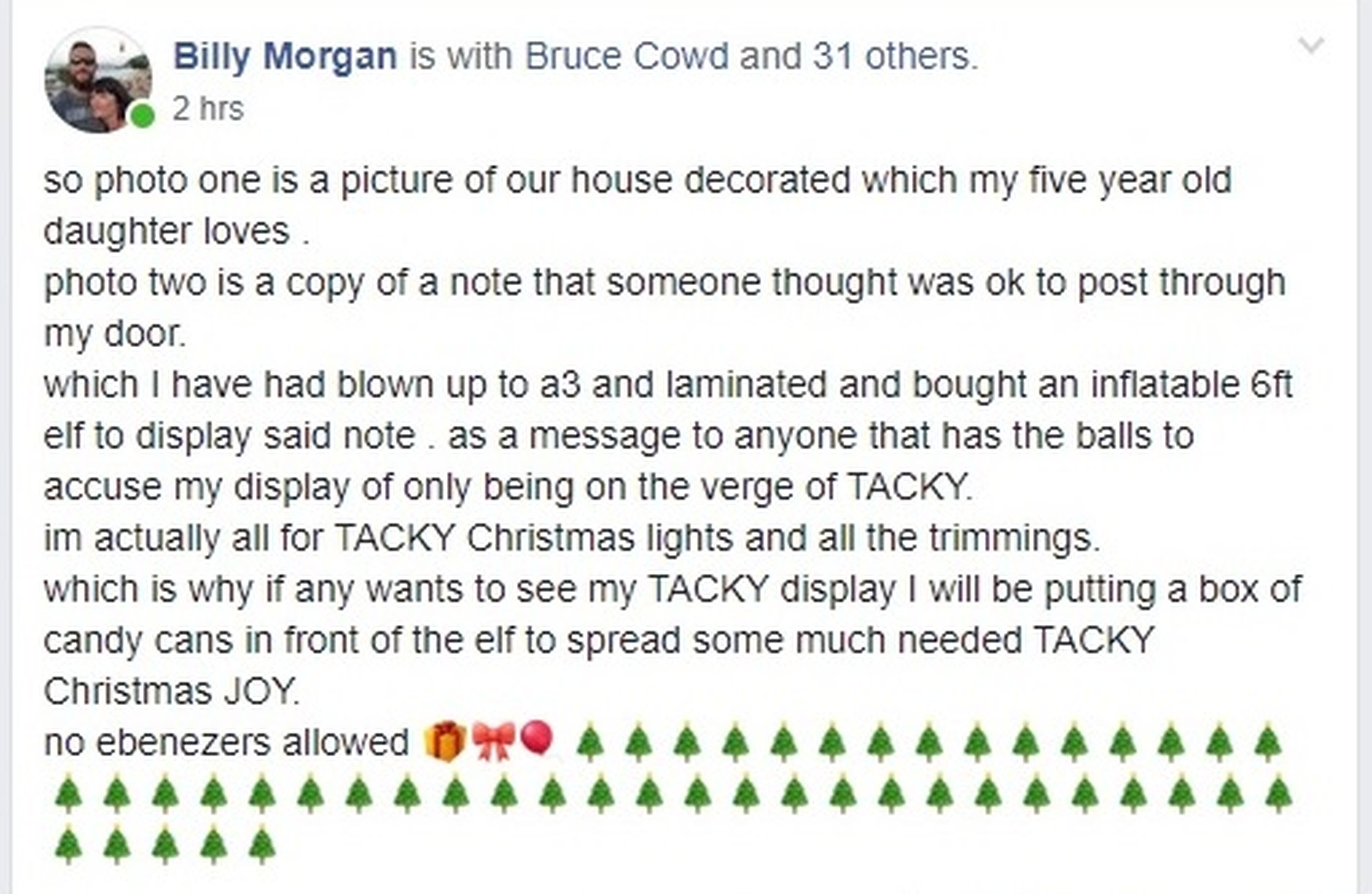 SINGAPORE (Reuters) – Singapore said on Monday that the coronavirus outbreak will hurt its economy this year, as it announced