D-Day courage is cast in bronze: 75 years on from the landings, ROBERT HARDMAN gets the first glimpse of Normandy memorial statue that will honour British heroes

They have been waiting 75 years for this moment.

And five days from now, the dwindling band of brothers who took part in the greatest military operation of all time will have their first sight of the monument to their 22,442 comrades who never came home.

Today, the Mail is proud to give its generous readers this exclusive glimpse of the stirring statue that will form the centrepiece of the new Normandy Memorial.

It has just been erected on the spot where so many young men charged ashore and gave their all. Now under wraps and round-the-clock protection, it will be formally unveiled on Thursday – the anniversary of D-Day – in front of veterans, bereaved families and world leaders including the Prime Minister and the French President. 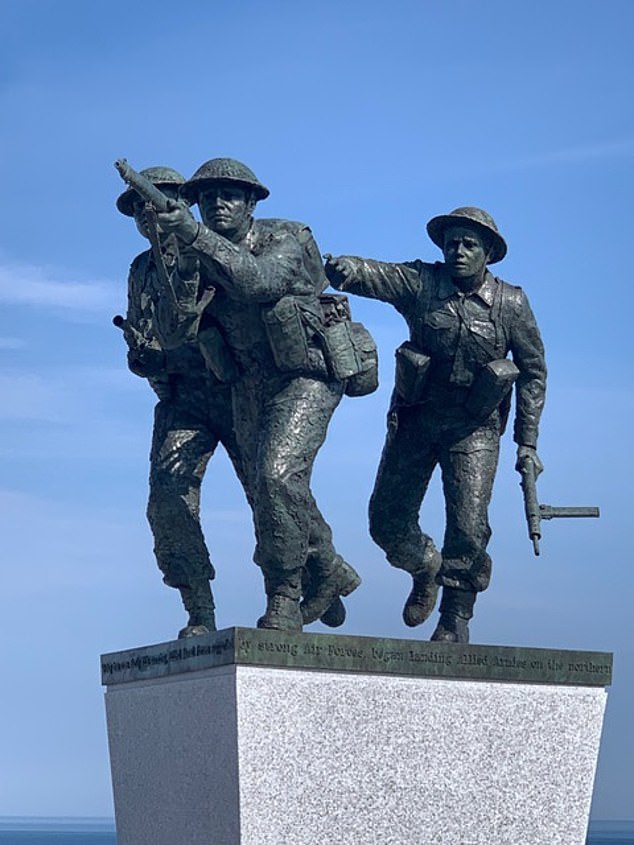 Five days from now, the dwindling band of brothers who took part in the greatest military operation of all time will have their first sight of the monument to their 22,442 comrades who never came home

Here we see three British soldiers charging up the beach and into the hellish unknown, their camaraderie beautifully captured in bronze.

Standing 9ft tall and weighing several tons, the three figures are not based on any individuals and deliberately carry no legible regimental markings or insignia.

The great D-Day invasion of France on June 6, 1944 involved hundreds of thousands from all the Services and the Merchant Navy, too.

The ultimate purpose of this colossal multinational endeavour, however, was to put Allied infantry on French soil and keep them there.

That is why the award-winning sculptor David Williams-Ellis has distilled the essence of D-Day into this powerful and dynamic study of that quintessential hero – the ordinary British soldier doing his duty.

‘They are in standard battle dress and in my mind one is a lance corporal and the other two privates,’ said Mr Williams-Ellis, who spent months researching every aspect of the invasion and talking to many veterans before embarking on this great undertaking.

‘There is no rank on them, it’s just a suggestion. I wanted it to be a scene expressing camaraderie and leadership. I will leave the viewer to judge which is the lance corporal.’ 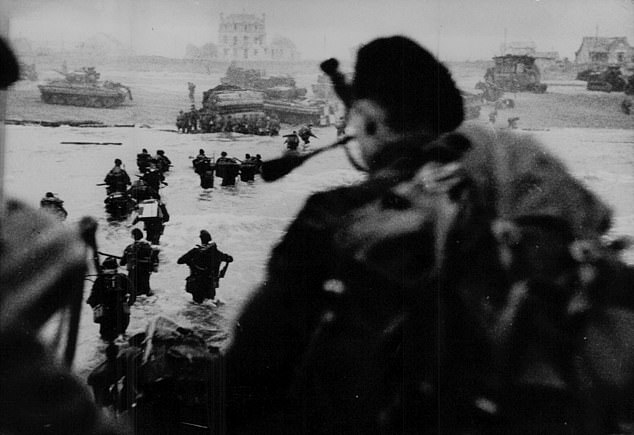 Award-winning sculptor David Williams-Ellis has distilled the essence of D-Day into this powerful and dynamic study of that quintessential hero – the ordinary British soldier doing his duty. Pictured are allied soldiers landing on a Normandy beach on D-Day

He has also sought to represent the three main fighting components of a standard infantry section. One figure is armed with a Bren light machine gun, one has a Sten machine gun and the third clasps the trusty Lee Enfield .303 rifle.

‘He is just about to get the rifle into his shoulder and fire,’ said Mr Williams-Ellis. ‘I wanted to create something that really had energy.’

The statue is the first phase of a memorial that will not be completed for at least another year. Spread across a 50-acre site at Ver-sur-Mer, overlooking a ten-mile stretch of sand codenamed ‘Gold Beach’, it will feature stone columns engraved with the names of every serviceman under British command who perished in the invasion and the subsequent 77-day Battle of Normandy.

Among the women honoured will be two brave nurses who were still tending to the wounded when their hospital ship, the Amsterdam, was sunk off Juno Beach.

Every other allied country involved in the landings has long had a national memorial on French soil. Not so Britain – until now. The omission has been a source of disappointment to the veterans who are still raising funds. For them, Thursday’s inauguration ceremony will be a very happy milestone.

‘Anyone who talks to the veterans and to the loved ones of those who fell can be under no illusion about how much this memorial means to them. Now it’s really happening,’ said Lord Dannatt, the former Chief of the General Staff and a trustee of the Normandy Memorial Trust.

The project has been made possible thanks to a £20million grant from the Treasury’s Libor Fund (of penalty fines from errant banks) plus donations from the philanthropist Michael Spencer and thousands of Mail readers. However, a further £7.5million is still urgently needed to complete it.

Let no one say that this is now ‘history’ or that it is time to ‘move on’. Here at the Mail, we have been bowled over by the response to our campaign, as have the trustees and volunteers at the trust.

Take this enchanting letter from Margaret Betts, of Stone, Staffordshire, who kindly sent a donation in honour of her father, Private Daniel McLoughlin, who died on July 12, 1944.

‘I was 18 months old then so never really knew my dad except in photographs my mum gave me,’ she writes. ‘She told me how he saw me three or four times before he left for Normandy so that is nice to know he was able to hold me in his arms.’ Margaret took her widowed mother to visit his grave many times before her death in 2009. She now looks forward to visiting the memorial with Daniel’s grandchildren and great-grandchildren.

‘I’m 76 and I’ve missed my father every day of my life,’ she tells me. So many donations have come from people who never knew their uncles or fathers; many more from those eternally grateful that a loved one or forebear made it back alive.

To understand how the events of 1944 resonate to this day, just listen to some of the heartbreaking messages and testimonies on the memorial’s website. They include the stories of men like Squadron Leader Jack Collins DFC and Bar, from Newcastle, a Typhoon pilot who was killed leading 245 Squadron over Caen in 1944.

His son Mike Collins was four when he died. He talks movingly of his excitement, as a toddler, on seeing his father’s picture in the paper, not realising it was a report of his death. Like all the relatives of those who fell, Mike now cannot wait to see the memorial take shape and to see his gallant father finally included on the Roll of Honour.

‘I am very proud of my father and his colleagues,’ says Mike. ‘We will remember them.’ And so – with your help – we shall.

All donations to normandymemorialtrust.org or cheques to The Normandy Memorial Trust, c/o The Secretary, 56 Warwick Square, London SW1V 2AJ.