A comedy mug that called local councillors ‘idiots’ was banned after the council leader said that not all staff would ‘appreciate the joke’.

Anthony Gotts, owner of Handmade in Rossendale, which is based in Lancashire, was ordered to stop selling the item or face losing his Rawtenstall Market stall, the Lancashire Telegraph reports.

The otherwise plain white mugs he sold were emblazoned with the words: ‘In Rossendale we call our idiots ”The Council”.’ Mr Gotts had been selling them at the market for several years before he received a letter instructing him to stop.

Leader of the Borough Council, Cllr Alyson Barnes, said she felt that not all council staff would ‘appreciate the joke’.

Mr Gotts found a new home for the item at Queens Dock Barbers on Bank Street, not on council property, and went on to raise £170 for Rossendale Hospice by selling off his stock.

Writing on his business’ social media account on December 17, Mr Gotts said he was visited by Samara Barnes, a Councillor from Haslingden, and the pair had a ‘jolly little chat’ about the mug. 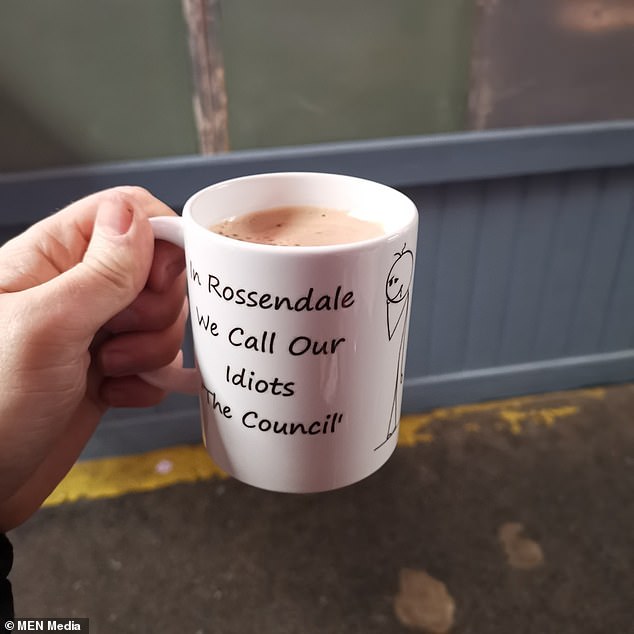 Writing on his business’ social media account on December 17, Anthony Gotts said he was visited by Samara Barnes, a Councillor from Haslingden, and the pair had a ‘jolly little chat’ about the mug

He added: ‘Today I received a phone call telling me I had to remove my best selling line from sale or be suspended from the place I usually sell my goods. This ultimatum was passed directly from the council. Coincidence? Possibly but I doubt it.

‘I’ve been selling these mugs for almost three years, local councillors, politicians, council workers have all bought them along with other members of the public.

‘We’ve all had a bit of fun chatting about them, they’ve been a great ice breaker.’

But in an update on December 18, he gave ‘huge thanks to Rossendale Borough Council for their excellent PR campaign’, revealing that his customers had been offering to overpay for the mugs.

Mr Gotts wrote: ‘I feel inspired by my customers generosity so, not only am I going to donate the profit, I’ll donate the entire takings on these mugs and round it up to £150

And in a further update, included in his original post, Mr Gotts said that Samara Barnes had emailed the Chief Executive of Rossendale Council ‘to say she does not agree with council leader Alyson Barnes’ decision to censor my mugs’.

He added: ‘I’m now relatively happy that Samara inadvertently caused this to happen and I don’t wish her any ill. I’m sorry if I caused any personal abuse to go in her direction. It seems my customers are pretty protective of my business.’