Murdered on his first day at work: Colombian security guard, 22, is fatally shot before he guns down armed robber who attacked him

A 22-year-old Colombian security guard was killed on his first day at work when he was shot at point-blank range as he tackled an armed robber.

CCTV footage, captured on December 27 in the Colombian city of Cúcuta, shows Miguel Ángel García Naranjo sitting outside, dressed in his guard’s uniform, when an armed man comes up behind him.

In an attempt at intimidating the young guard, the armed man shoves the barrel of his handgun into Mr Naranjo’s neck. 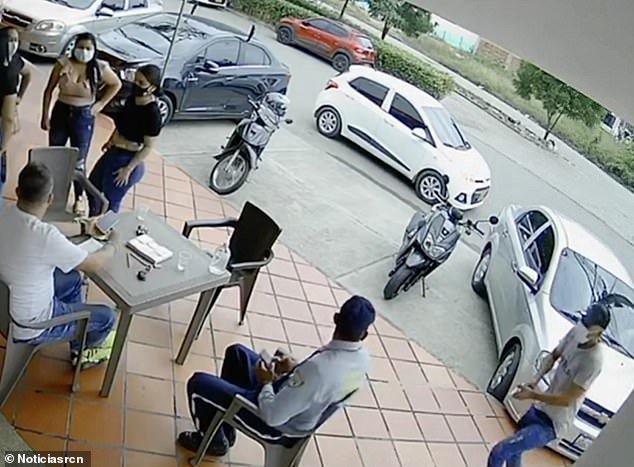 Mr Naranjo responds by pushing the assailant away and jumping out of his seat.

Five women and a man at the scene with Mr Naranjo flee upon seeing the armed robber.

The robber, identified by police as 25-year-old Venezuelan Raiquet Samuel Machado, shoots Mr Naranjo while out of view of the CCTV camera.

Despite having received a fatal gunshot wound to the abdomen, Mr Naranjo responds in kind, letting off several rounds at the fleeing gunman.

Machado Sánchez ran towards his getaway driver but he keeled over before he could get on the back of the motorcycle, according to local news reports.

The getaway driver left without Machado Sánchez, who reportedly died where he fell. 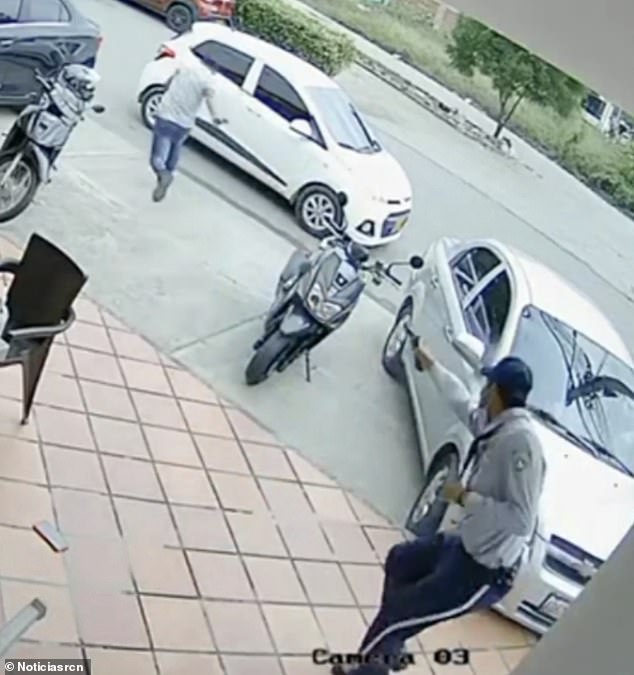 Despite being shot in the abdomen at point-blank range, Mr Naranjo fires at the fleeing gunman, killing him before he can make it to his getaway vehicle

Mr Naranjo was taken to a local hospital, Medical Duarte, but doctors were unable to save him.

Police are currently searching for the Venezuelan gunman’s accomplice.

In a statement, Alejandro Martínez, Secretary of Citizens’ Security from the local government, said: ‘We reject these types of actions, and the Committee for Public Order, alongside the police, will keep working to ensure the security of the people of Cúcuta.’

Machado Sánchez had previously been arrested in May 2019, on suspicion of the killing of Jader Leonidas Agudelo four months earlier.

However, he was freed after authorities failed to press charges against him within the legally stipulated time, according to a report by FM Santander, a local Colombian radio station.

Cúcuta, which borders Venezuela and is infamous for playing host to narcotrafficking gangs, suffered a 30 per cent year-on-year increase in homicides in 2020.