Come for the King Cobra, you best not miss! Snake fights its way out of python’s death grip, kills it and devours it whole in brutal fight to the finish

This is the dramatic moment a king cobra was found on the roadside locked in fierce death grip with a python.

The two predators clashed in the undergrowth before spilling out in front of passing drivers in Nakhon Si Thammarat, southern Thailand on December 9.

Incredible images shows how the python wrapped its thick body around the cobra and tried to constrict its adversary, which then sank its fangs into its opponent’s neck.

Onlooker Anoochit Preecha watched as the two reptiles both struggled to exert dominance while they were twisted in the fierce duel.

He said: ‘One was fighting for its life, and one was satisfying its hunger. I’m lucky to have witnessed such a rare event.’

Pythons kill their prey by strangling them to death, while cobras strike at the base of their target’s neck to inject a deadly venom.

On this occasion, the cobra was able to hold out long enough while its deadly venom weakened the python, causing it to lose its grip. It then slowly died before the cobra swallowed it whole.

Some snakes, including pythons and cobras, engage in cannibalism when they clash over food or territory. 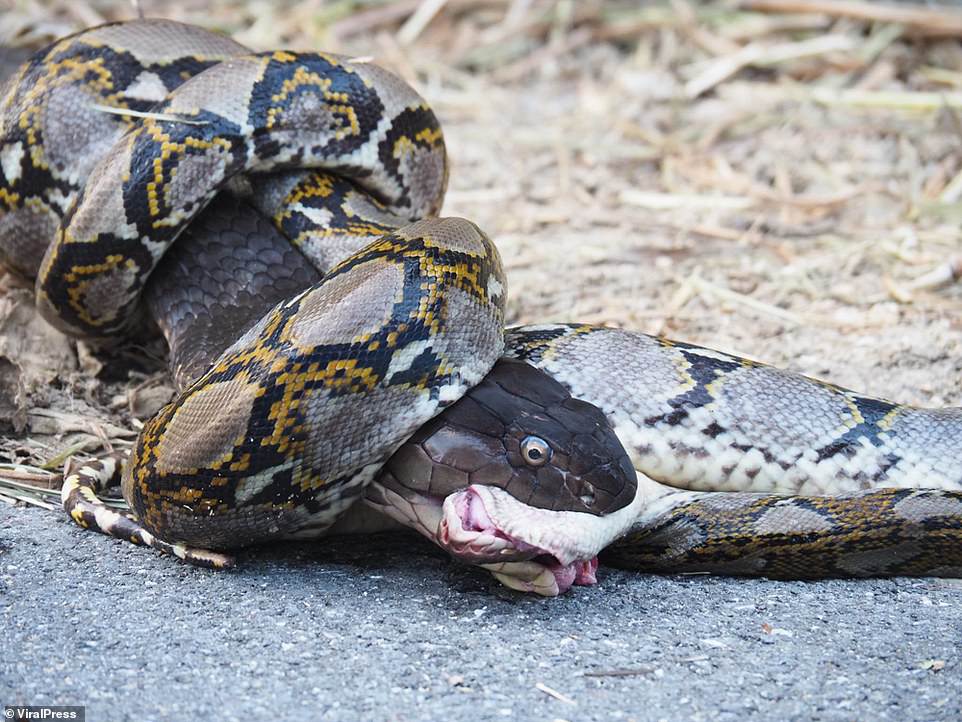 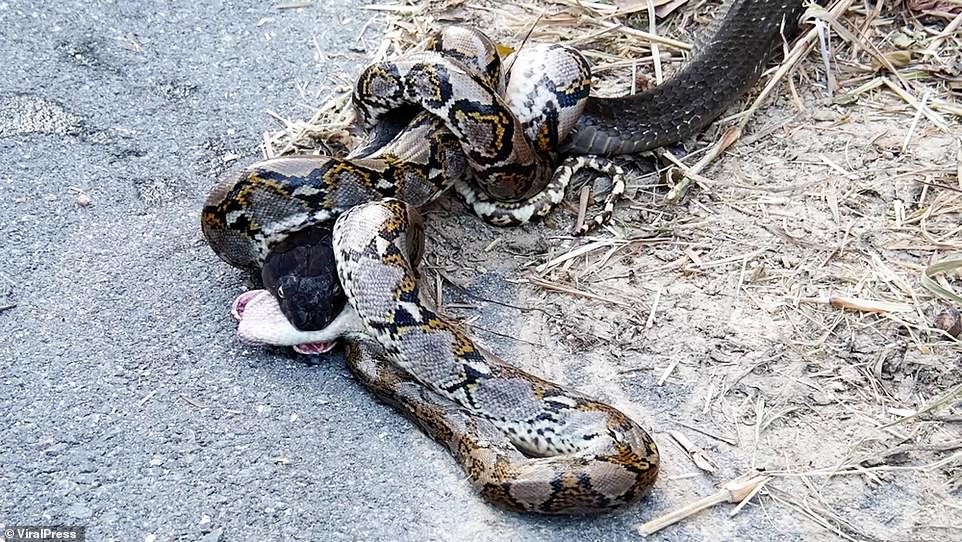 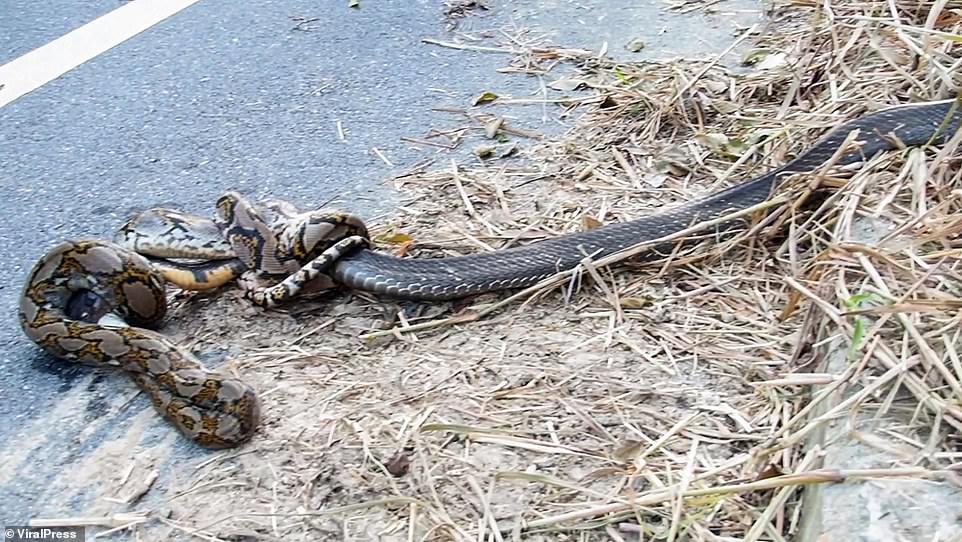 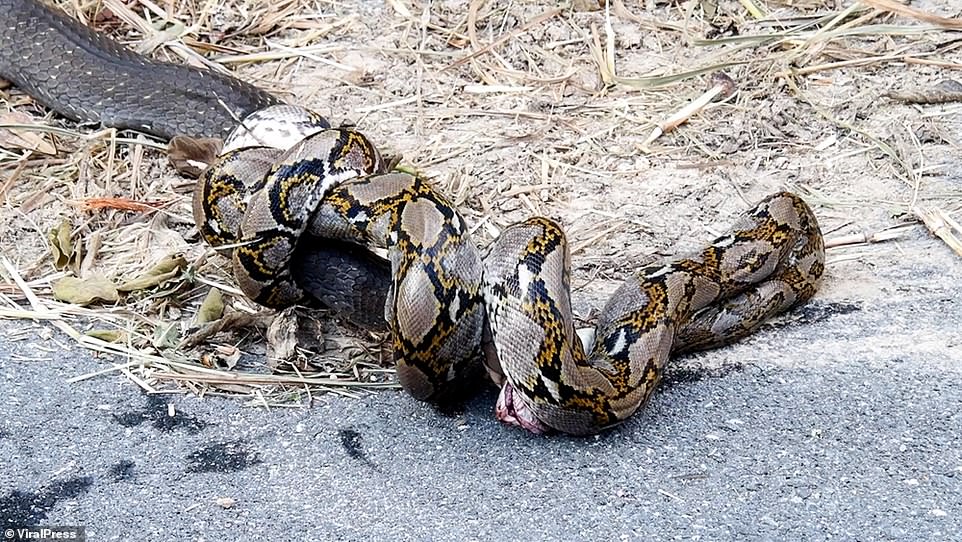 Before long though, their dramatic battle had tumbled out onto the side of the road, for any motorist passing by to witness 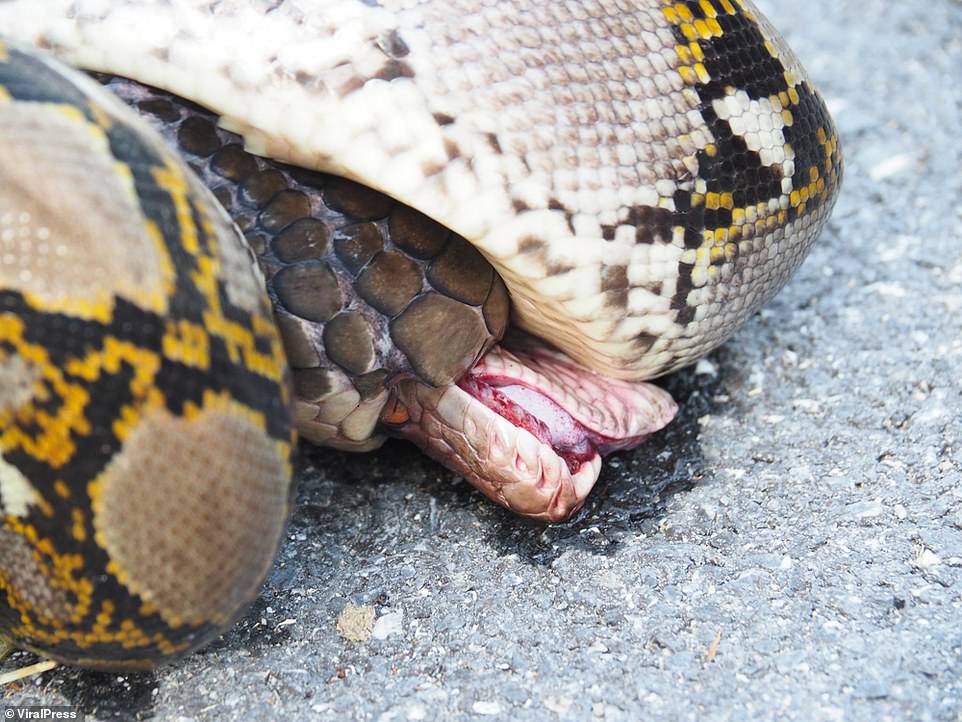 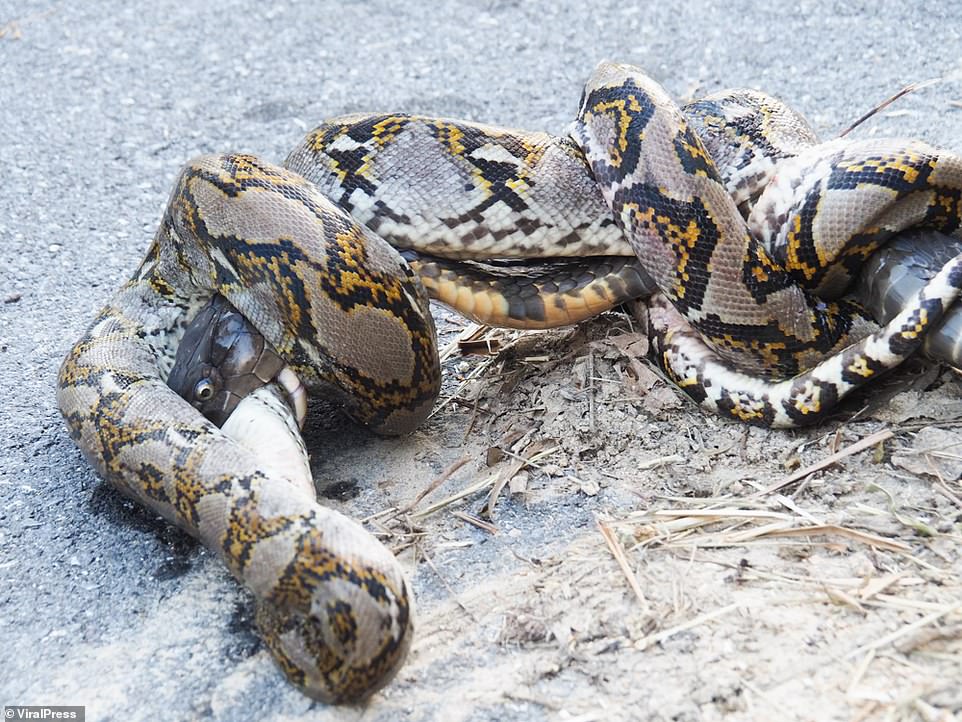 However, the cobra responded by  sinking its fangs into the neck of the larger snake and letting its venom go to work 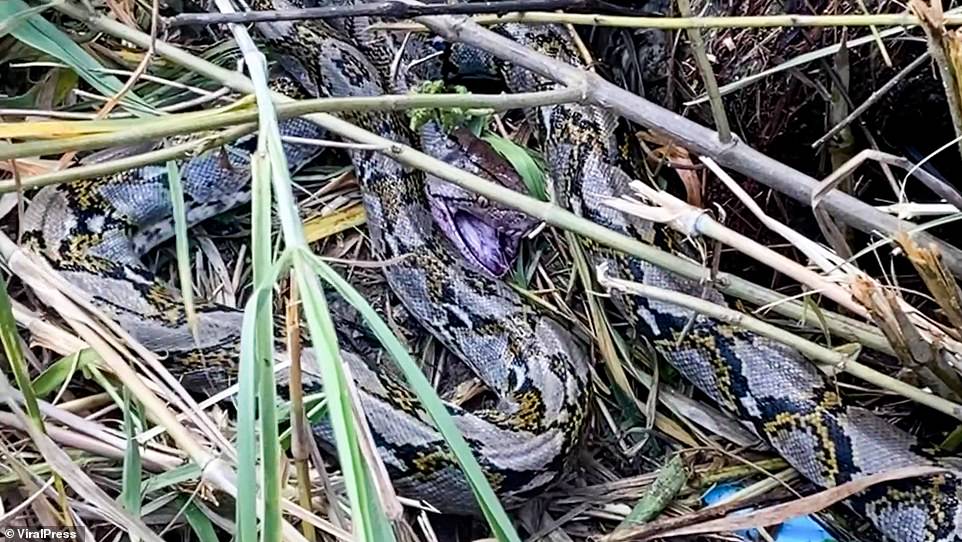 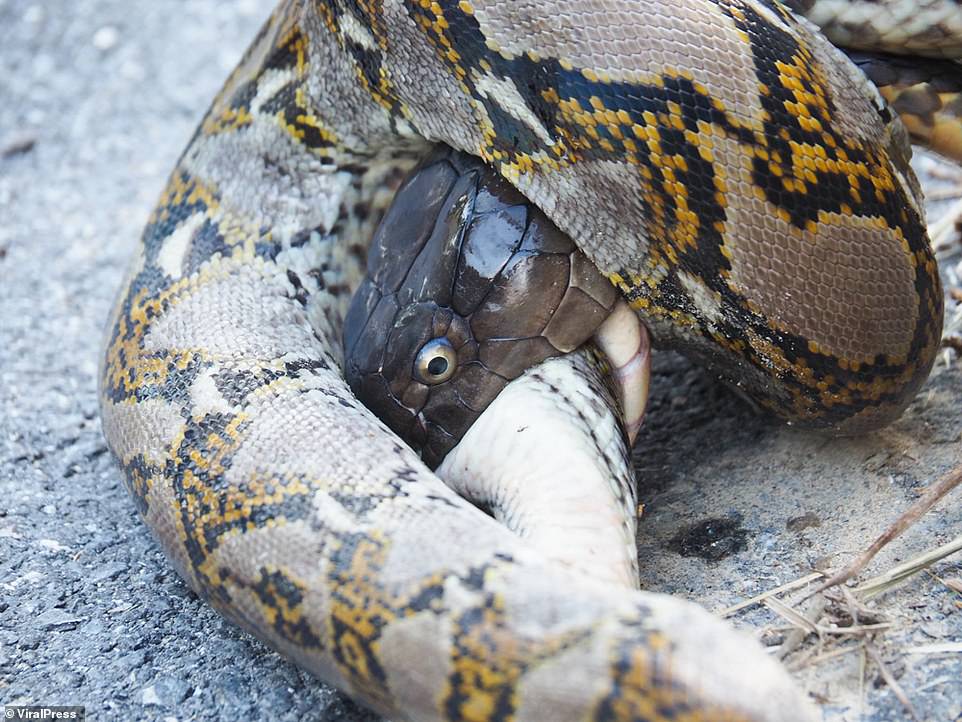 With the python’s intense grip on the cobra, the smaller snake had little option but to wait for its venom to take effect 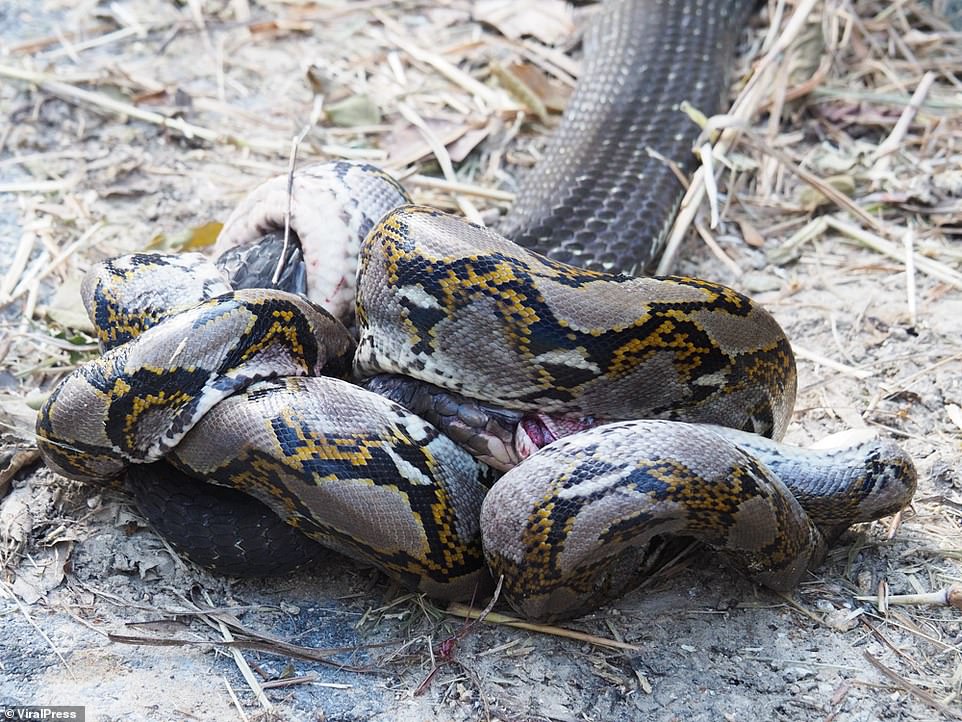 For a while, the cobra’s struggle seemed to be in vain, with the two large snakes tangled together 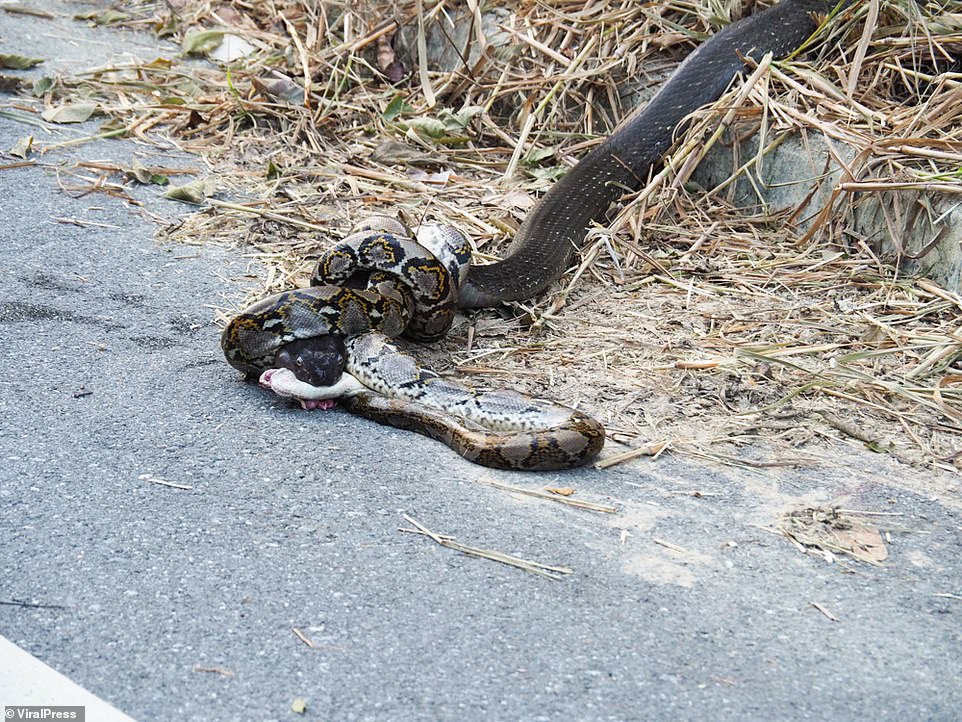 Eventually though, the cobra’s venom took effect and loosened the python’s grip around its body 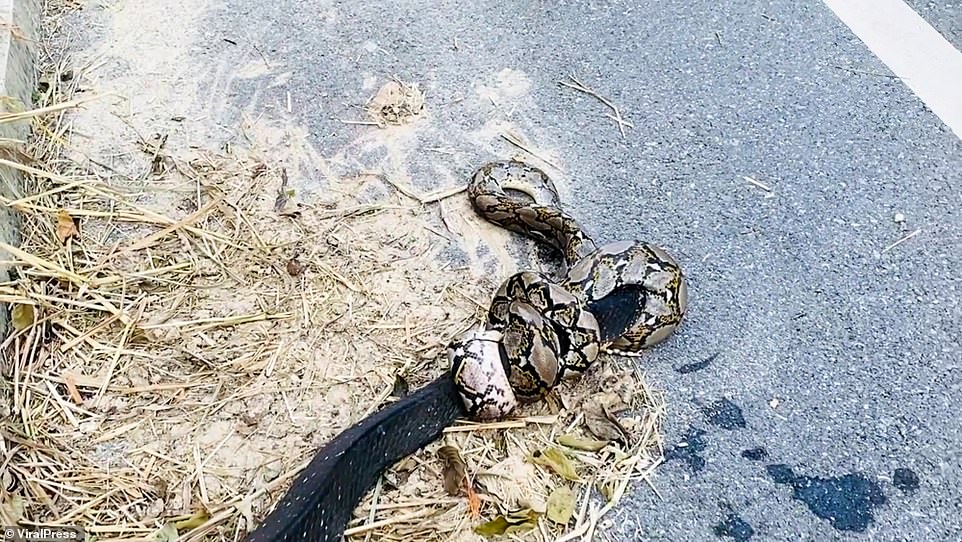 At first, it seemed as though the black king cobra was doomed, as the python established an early dominance in the battle