A 113 square km sheet of ice has broken away from the Arctic’s largest remaining ice shelf, researchers have said.

Satellite imagery of the Nioghalvfjerdsfjorden Glacier, in northeast Greenland, shows the huge slab of ice having broken away last month and splintering into smaller fragments.

The fractured area itself is a northern tributary called the Spalte Glacier, and has been under the watchful eye of scientists for years as increasingly warm temperatures led to its gradual disintegration.

“When you observe large parts of an ice shelf breaking off you do raise an eyebrow, but with current developments in the Arctic there is also the realisation that this is to be expected,” Dr Niels J. Korsgaard, a researcher at The Geological Survey of Denmark and Greenland (GEUS), said. 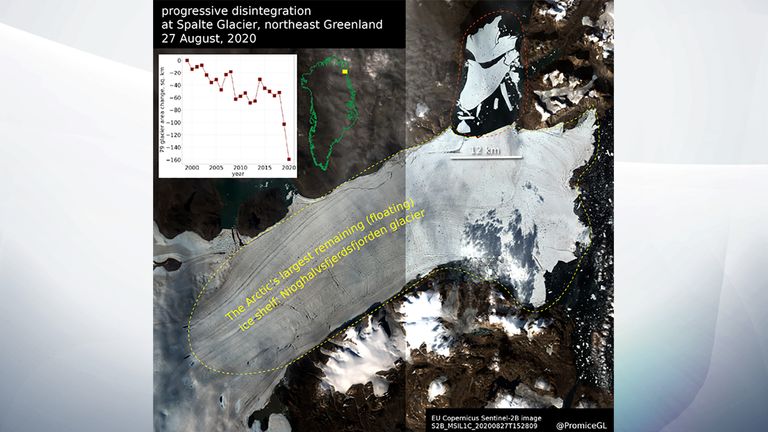 “Temperatures in the Arctic are rising faster than the global average.

“More heat is available from air and ocean to melt away the bottom and surface of ice shelves, and the thinning ice shelves are more susceptible to breaking up.”

The huge shelf, which is around 70km in length and 20km in width, has lost more than 50 square miles of its mass each year for the last two years, according to GEUS.

It has lost 160 square miles since 1999 – or an area twice the size of Manhattan Island in New York.

Dr Jenny Turton, a researcher at Friedrich-Alexander University in Germany, said this could be explained by several “incredibly warm” years in northeast Greenland, particularly amid recent record-breaking heatwaves across Europe.

Overall, the atmosphere near the shelf has risen around 3C since 1980. 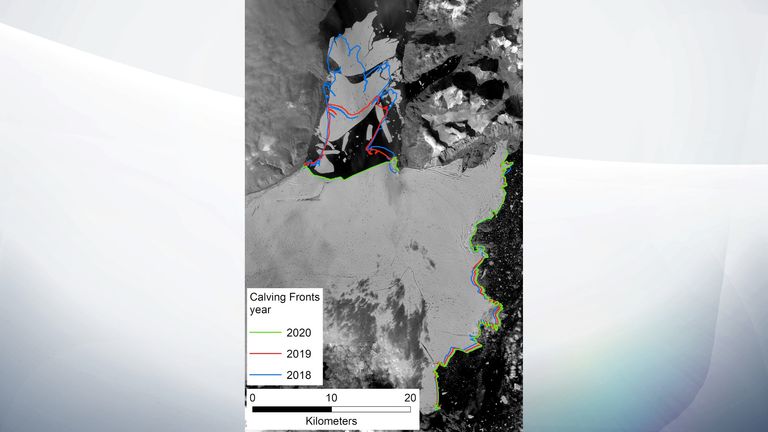 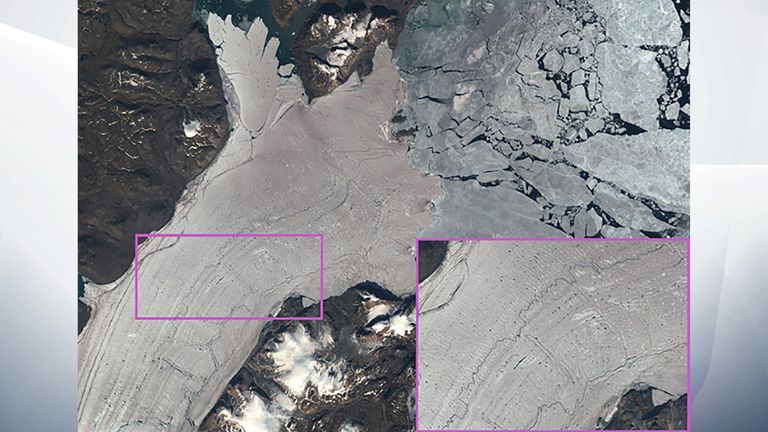 An ever-increasing warm climate, Dr Turton warned, will see further changes to the glacier when water drains onto the tongue in summer months to form rivers and ponds.

These pools of water then refreeze during the winter, putting extra pressure on the floating tongue, and can result in it breaking apart.

Nioghalvfjerdsfjorden sits at the front of the Northeast Greenland Ice Stream, and is one of two main glaciers draining the interior ice sheet.

The other, Zachariae Glacier, lost its ice shelf to disintegration between 2002 to 2015 – and now the Nioghalvfjerdsfjorden is believed to be fracturing at a similar rate.

“We should be very concerned about what appears to be progressive disintegration at the Arctic’s largest remaining ice shelf,” said GEUS professor Jason Box, who added that it was the “only major Greenland ice sheet ice stream” located upstream.