Christian Eriksen says he wants to play in this year’s World Cup despite “dying for five minutes” during Euro 2020 last June.

The former Tottenham and Inter Milan midfielder suffered a cardiac arrest while playing for Denmark against Finland in Copenhagen.

Before being resuscitated the 29-year-old “was gone”, Denmark team doctor Morten Boesen said at the time.

But in a new TV interview, the former Tottenham and Inter Milan midfielder said his heart is “not an obstacle” and he wants to prove it was a “one-timer and that it won’t happen again”.

“My goal is to play in the World Cup in Qatar,” he told Danish station DR1. “I want to play. That’s been my mindset all along. It’s a goal, a dream.

“Whether I’ll be picked is another thing. But it’s my dream to come back.”

Since his cardiac arrest, Eriksen has been fitted with an implanted cardioverter defibrillator.

He was released by Inter Milan last month because Italian rules do not allow someone to play with such a device.

But Eriksen said he is “sure I can come back because I don’t feel any different”. 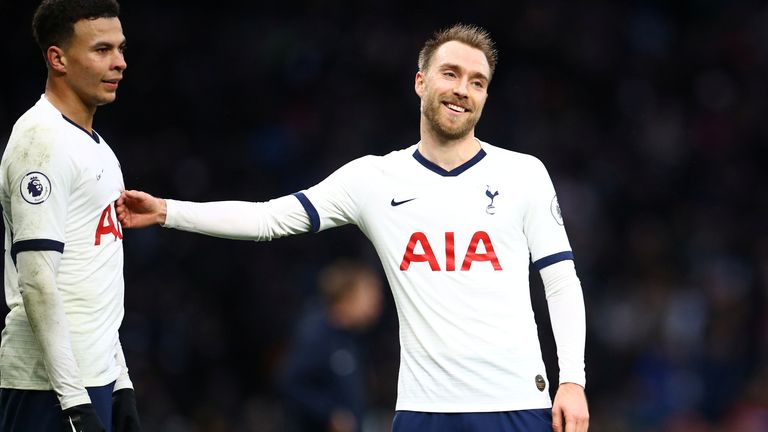 He added: “Physically, I’m back in top shape. I want to prove I’ve moved on and that I can play on the national team again.

“It’s up to the manager to assess my level. But my heart is not an obstacle.”

He has been training on his own at Odense, where he was a youth team player between 2005 and 2008, and was recently seen practising alone at Swiss club Chiasso.

The player – a fans’ favourite during his time at Spurs – has thanked people for all the best wishes he received after collapsing on the pitch.

“It was amazing that so many people felt a need to write or send flowers,” he said.

“It had an impact on so many people – and they felt a need to let me and my family know. That makes me very happy.

“At the hospital, they kept saying I’d received more and more flowers. It was weird, because I didn’t expect people to send flowers because I’d died for five minutes.

‘It was quite extraordinary but it was very nice of everyone.”

People are still writing to him, he added, and he has “thanked people I’ve met in person”.

He continued: “I’ve thanked the doctors, my team mates and their families in person.

“But all the fans who’ve sent thousands of letters and emails and flowers – or who’ve come up to me on the street, both in Italy and Denmark – I thank them all for the support I got from all over the world that helped me through this.”