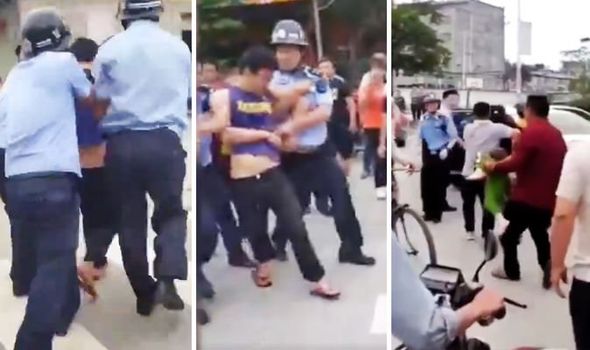 Police have arrested a man who attacked the victims in Beiliu City, in south China’s Guangxi region this afternoon. Footage shared on social media show the suspect being detained and taken into custody by police.

Two of the children were seriously injured in the attack, state-run Xinhua news agency said.

A suspect was arrested by police, Xinhua added.

All those injured have been rushed to hospital, according to state-run China Global Television Network.

According to local reports, the suspect was a 24-year-old man from the city.

Following the attack, people have taken to Weibo – China’s social media platform – to express condolences for the victims.

One person said: “This news really breaks my heart.

“Those poor children have done nothing wrong, they are innocent.”

Many hoped the suspect would be severely punished with others suggesting the death penalty.

Violent crime is relatively rare in China, but the country has seen unrelated knife attacks in recent months.

Back in January, police in the Chinese city of Kunming shot and killed a knife-wielding man.

The man attacked seven people outside a middle school and later kidnapped a boy and held him hostage.

One of the injured died later from their injuries.

In December last year, at least seven people were killed by a knife-wielding attacker in Kaiyuan, a small city in the Liaoning province.

An eyewitness said at the time that the attack started outside a school and most victims were middle-aged or elderly women.

One witness said: “It’s lucky that school is off today.

“Otherwise there could have been more victims.”