Home » World News » Byron in ‘state of flux’ ahead of Bluesfest, school holidays

Tens of thousands of people are still expected to travel to Byron Bay for the annual Bluesfest music festival this Easter long weekend, despite a bachelorette party infected with COVID-19 triggering major health alerts at the holiday destination.

Five new coronavirus cases in Queensland on Tuesday were linked to the bachelorette group, including a tradesman described by authorities as providing entertainment for the group. 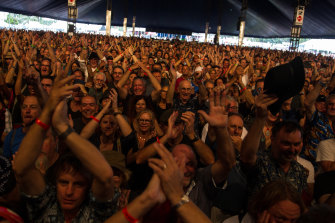 Scenes from 2015 Bluesfest. The festival will proceed this weekend despite uncertainty around the spread of coronavirus in the Byron region.Credit:Edwina Pickles

A sixth case is under investigation but likely also linked to this cluster. Two remaining cases are believed to be older cases linked to the doctor at Princess Alexandra Hospital in Brisbane who tested positive on March 11. The eight new cases were announced on the first day of a three-day lockdown for Brisbane.

With Bluesfest and the upcoming school holidays under threat, Byron Shire Council Mayor Simon Richardson said residents and businesses were waiting anxiously for information “as to what’s unfolding”.

The mayor said the community was keen to see Bluesfest go ahead “as long as we have the assurance from NSW Health that it’s safe”.

Cr Richardson is also waiting for Queensland authorities to make a call about stay-at-home requirements beyond Thursday night.

“If the lockdown was extended in Brisbane, it would be entirely worthy of consideration for our government to create a border checkpoint to ensure people can’t cross,” he said.

“Just relying on good will, I’m not sure is going to cut it.”

Bluesfest organisers have asked revellers at the festival, which was expected to attract 50,000 attendees to bring proof of residence, with Brisbanites barred from entry while still under lockdown.

UNSW Scientia Professor John Kaldor said there were a number of factors which would assist in managing the risk of an outbreak at a music festival, including the outside location and monitoring where in the venue people were moving through QR codes.

“There’s a number of things you can do to reduce risk but you can’t eliminate risk,” he added, noting people who have been drinking can be “less aware” of COVID-safe behaviours.

The rule changes have left musicians set to play at the festival scrambling to adjust plans, with headline act The Church anxious that an extension of lockdowns could prevent Brisbane-based guitarist Ian Haug from getting to Byron for the band’s Friday night show.

Manager Mark Smithers said the band’s first gig in two years would be cancelled without Haug.

“They’re definitely anxious,” Mr Smithers said. “If the lockdown gets extended for an additional 24 hours then Ian can’t attend Bluesfest and we can’t do the show.”

Bluesfest did not respond to questions but told Queensland ticketholders it would contact them on Tuesday.

“I hope that we won’t have any new cases emerge in NSW, but I wouldn’t be surprised if we did so we need to brace ourselves,” the Premier said.

There were no new local coronavirus cases reported in NSW on Tuesday, although a person who caught the virus at the bachelorette party was a NSW resident who is currently in Queensland.

NSW reported just 7303 tests in the 24 hours to 8pm Monday. There were five new cases recorded in returned overseas travellers during the reporting period.

Cr Richardson said queues for COVID-19 testing had increased in Byron but “if we need to push and get more to test over the next 24 hours, we’ll push for that”.

The recent spike in local Australian cases comes as the Australian Health Practitioner Regulation Agency announced it would be closing its sub-register for non-registered health practitioners, established in case the pandemic required a surge healthcare workforce.