Millions of heart failure patients could be cured with tiny patches of cells that can be stitched directly on to their damaged organ.

British scientists have developed a way of growing tiny amounts of heart tissue in the laboratory, which can be observed ‘beating away’ on their own in Petri dishes.

The Cambridge University team hope this will provide the first ever cure for debilitating heart failure, which affects nearly 1million people in the UK and tens of millions worldwide.

The thumb-sized patches are made using stem cells, which can be grown into any type of human cell, and are constructed into tissue using tiny ‘scaffolding’ made of the protein collagen. 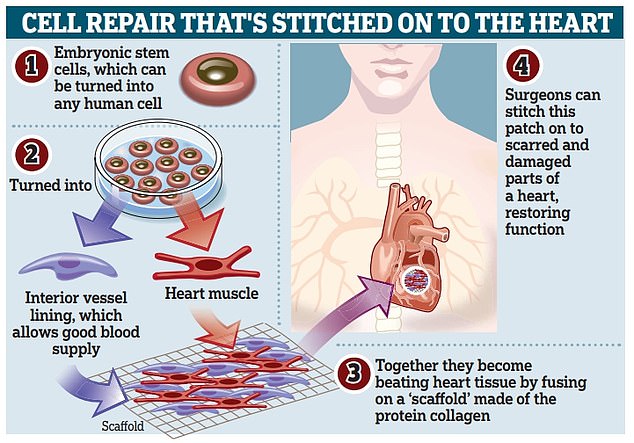 British scientists have developed a way of growing tiny amounts of heart tissue in the laboratory, which can be observed ‘beating away’ on their own in Petri dishes

They have been tested on rats and will soon progress to human trials which, if successful, could lead to the mass- production of millions of heart patches to cure heart failure.

Professor Sanjay Sinha, who is leading the pioneering research, said: ‘When someone has a heart attack, their heart muscle is starved of vital nutrients and oxygen.

‘We can lose a billion heart cells in one heart attack and the human heart doesn’t regenerate itself. It heals by scarring. The muscle that you lose never comes back.

‘This means the heart just doesn’t pump efficiently and patients are breathless and struggle with things they used to take for granted like walking upstairs or getting dressed.

‘Of people who develop heart failure, half will be dead within five years. So it is just as serious as having various types of cancer.

‘At the moment all we can do is give them tablets, but that doesn’t cure the underlying problem, which is the lost heart muscle.

‘The only real treatment is a heart transplant and this country only does 200 a year. We have come up with a new solution – using the power of stem cells to mend damaged hearts – which could restore their heart function and their lives back to normal. There are hundreds of thousands of people who could benefit.’

Professor Sinha said the research was ‘tremendously exciting’ and that if human trials, which will monitor patients over several years, are successful the patches could be used routinely on the NHS within 15 years.

He said: ‘Every time I go into the lab with my team growing little heart patches and look at them beating away it never ceases to amaze me.

How this would change my life 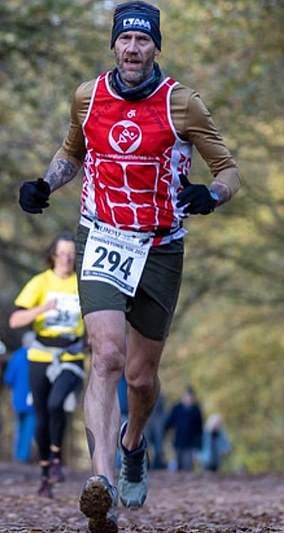 Pete Robertson had recently finished an Ironman Triathlon and was fitter than he’d ever been when he suddenly had a heart attack in November 2019.

The 49-year-old woke up struggling to breathe and in agony one night but thought it was just a chest infection or muscle soreness from exercising. Twelve hours later, he was in the back of an ambulance and told he was having a heart attack.

The father-of-three from Nottinghamshire said: ‘The damage to my heart meant I went from being able to easily run a marathon and do triathlons to shuffling around the room.

‘I struggled to come to terms with what had happened to me. What would have been a quick 5k run was taking me an hour and a half to walk and I was out of breath and had to keep stopping.’

Mr Robertson is now on five types of medication to help with the symptoms of heart failure. While he has since returned to exercising, he says he struggles to manage his anxiety.

Next year, he will run the London Marathon to raise money in the hope a patch could one day repair his heart damage.

He added: ‘Whenever I get chest pain I am terrified of it being another heart attack. Knowing that my heart damage could be fixed with a patch would be life changing physically and mentally. The anxiety would melt away.’

‘We’ve created this floating batch of beating hearts. These heart cells and little patches are like babies, they need to be fed every day with nutrients.’

Early trials by his team were successful and found the cells grown in the lab can be injected on to damaged hearts in rats. Professor Sinha added: ‘The next challenge is scaling it up. For the rat patch, we might use a million cells but for the human patch, we might want 100million cells or 500million.

‘The goal is to be able to have patches we can stitch directly on to damaged hearts when patients come in for surgery. We want a production line where you can make tens of thousands of patches, then a surgeon just picks it off the shelf and gives it to a patient.’

Professor Sinha’s work is funded by the British Heart Foundation, which is aiming to raise another £3million for research into regenerative medicine through being Charity of the Year for the 2022 TCS London Marathon. Professor Sinha is running the marathon to help fund his own research.

Professor James Leiper, associate medical director at the British Heart Foundation, said: ‘Growing patches of real heart tissue from stem cells may sound like science fiction, but it is at the cutting edge of the life-changing research that the Foundation funds. Nearly 1million people in the UK are living with heart failure, for which there is no cure.

‘Heart failure is a debilitating condition, making everyday tasks incredibly difficult and causing a huge decrease in quality of life.

‘These heart patches could be a giant leap forward for regenerative medicine and the answer to finding a desperately needed treatment for heart failure – offering hope to the millions of people affected.’