The gate escape! Bouncy boxer dog Lucy is caught on camera jumping over 6ft barrier to get out of garden

This is the moment a determined dog manages to escape her owner’s back garden in Wales by jumping over a 7ft wooden gate.

In a video shared online, the brown and white boxer, named Lucy, can be seen jumping up again and again but struggling to achieve enough height to break free.

A bigger dog can be seen looking on as she repeatedly fails to cling to the top of the gate.

But just as the other pooch gives up watching, Lucy manages to grapple the top on her seventh try before clambering over the edge and dropping down to the other side.

Lucy was supposed to have reduced movement after fracturing her back leg as a puppy.

But that didn’t seem to faze her as she used it again and again to spring herself several feet into the air.

The moment was captured by her owner who could not figure out how she kept escaping from the garden of the home in Griffithstown, Gwent. 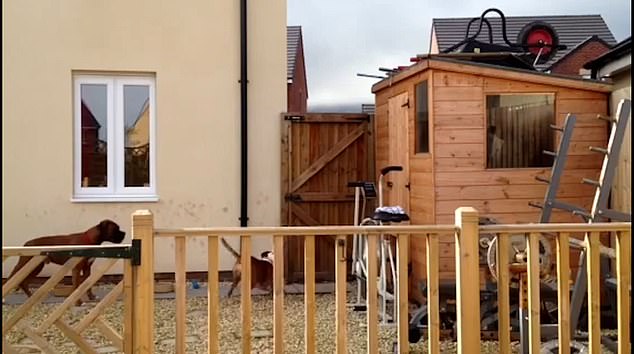 Lucy can be seen in a video eyeing up the tall gate at her home in Gwent, Wales, before attempting to jump over it 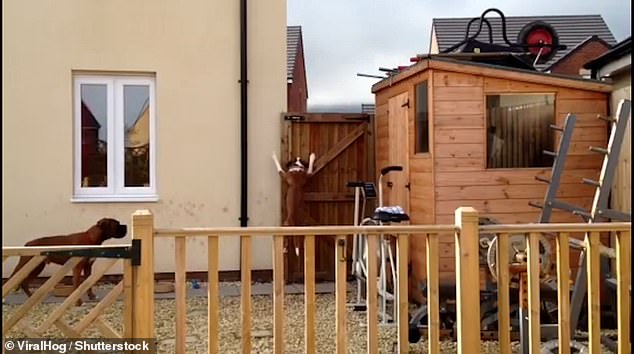 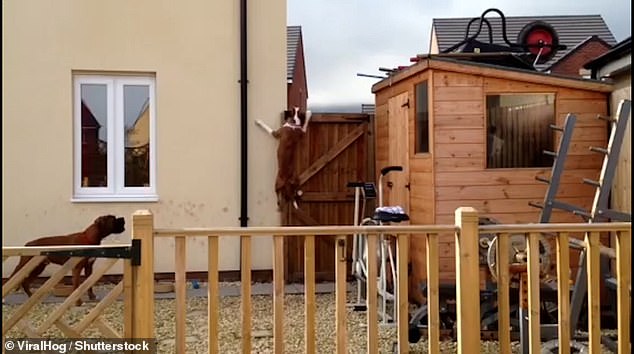 In a video, another dog looked on as Lucy kept falling short of the top of the gate 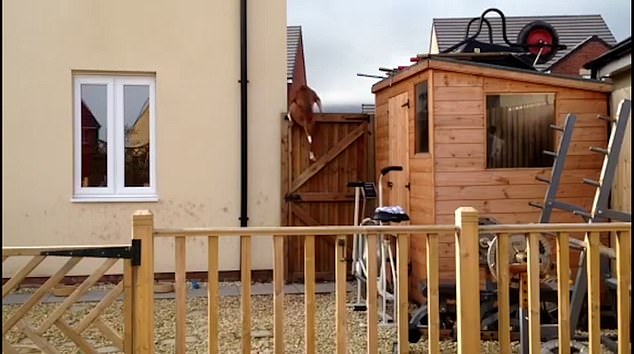 They said: ‘I couldn’t figure out how my Boxer Lucy was getting out of the garden, so I set up a camera.

‘She has a metal plate in her back leg from when she fractured it as a puppy and was supposed to have reduced movement!

Social media users branded Lucy’s efforts as inspirational after the video was uploaded at the weekend.

One wrote: ‘This Dog just inspired me… Never Give up, you can do it.’

Another said: ‘I respect that dog, mighty heart and a lion attitude.’

One joked: ‘She waited for the other dog to leave and then used her secret superpower jump.’

It’s not the first great escape made by a dog from a back garden to be captured by cameras.

It comes after one clever boy surprised his owner after escaping from a kennel by using a trampoline to clear a 6ft fence.

He followed his owner and surprised him on the train as he was making his way to work.