WASHINGTON (AP) — President Biden is ready to warn Vladimir Putin during a video call Tuesday that Russia will face economy-jarring sanctions if it invades neighboring Ukraine as the U.S. president seeks a diplomatic solution to deal with the tens of thousands of Russian troops massed near the Ukraine border.

Biden aims to make clear that his administration stands ready to take actions against the Kremlin that would exact “a very real cost” on the Russian economy, according to White House officials. Putin, for his part, is expected to demand guarantees from Biden that the NATO military alliance will never expand to include Ukraine, which has long sought membership. That's a non-starter for the Americans and their NATO allies.

The leader-to-leader conversation — Biden speaking from the Situation Room, Putin from his residence in Sochi — is expected to be one of the toughest of Biden's presidency and comes at a perilous time. U.S. intelligence officials have determined that Russia has massed 70,000 troops near the Ukraine border and has made preparations for a possible invasion early next year.

The U.S. has not determined whether Putin has made a final decision to invade. Still, Biden intends to make clear to the Russian leader that there will be a “very real cost” should Russia proceed with military action, according to a senior administration official who briefed reporters on the condition of anonymity.

Biden was vice president in 2014 when Russian troops marched into the Black Sea peninsula of Crimea and annexed the territory from Ukraine. Aides say the Crimea episode — one of the darker moments for former President Barack Obama on the international stage — looms large as Biden looks at the current smoldering crisis.

The eastward expansion of NATO has from the start been a bone of contention not just with Moscow but also in Washington. In 1996, when President Bill Clinton’s national security team debated the timing of membership invitations to former Soviet allies Poland, Hungary and the Czech Republic, Defense Secretary William Perry urged delay in order to keep Russian relations on track. Perry wrote in his memoir that when he lost the internal debate he considered resigning.

Poland, Hungary and the Czech Republic were formally invited in 1997 and joined in 1999. They were followed in 2004 by Bulgaria, Romania, Slovakia, Slovenia and the former Soviet states of Estonia, Latvia and Lithuania. Since then, Albania, Croatia, Montenegro and North Macedonia have joined, bringing NATO’s total to 30 nations. 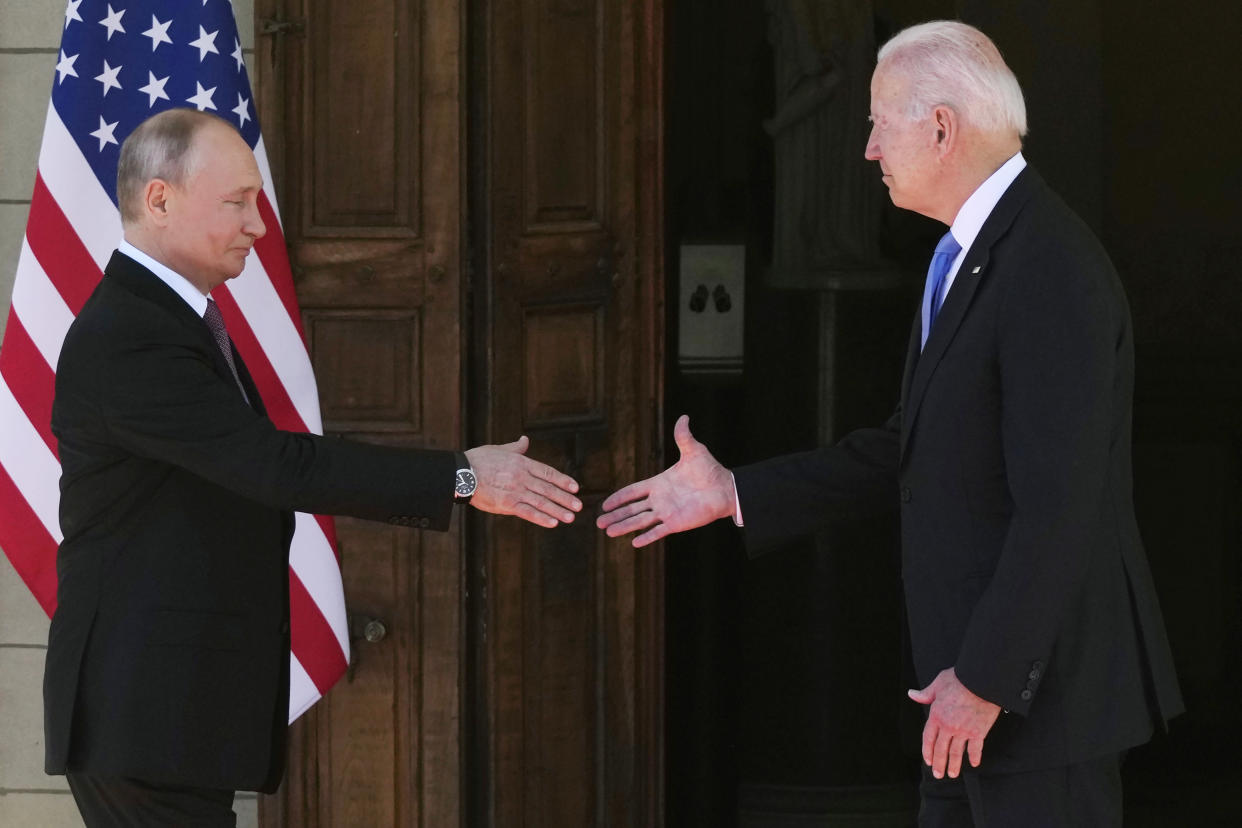 A key principle of the NATO alliance is that membership is open to any qualifying country. And no outsider has membership veto power. While there’s little prospect that Ukraine would be invited into the alliance anytime soon, the U.S. and its allies won’t rule it out.

In Washington, Republicans are framing this moment as a key test of Biden’s leadership on the global stage.

Biden vowed as a candidate to reassert American leadership after President Donald Trump’s emphasis on an “America first” foreign policy. But Biden has faced fierce criticism from Republicans who say that he’s been ineffective in slowing Iran’s march toward becoming a nuclear power and that the Biden administration has done too little to counter autocratic leaders like China’s Xi Jinping, Iran's Ayatollah Ali Khamenei and Putin.

“Fellow authoritarians in Beijing and Tehran will be watching how the free world responds,” said Senate Minority Leader Mitch McConnell. “And President Biden has an opportunity to set the tone when he speaks with Putin.”

Trump, who showed unusual deference to Putin during his presidency, said in a Newsmax interview on Monday that the Biden-Putin conversation would not be a “fair match,” describing it as tantamount to the six-time Super Bowl champion New England Patriots facing a high school football team.

Ahead of the Putin call, Biden on Monday spoke with leaders of the United Kingdom, France, Germany and Italy to coordinate messaging and potential sanctions.

The White House said in a statement that the leaders called on Russia to “de-escalate tensions” and agreed that diplomacy "is the only way forward to resolve the conflict.”

Ahead of the Biden-Putin faceoff, Secretary of State Antony Blinken on Monday spoke with Ukrainian President Volodymyr Zelenskyy.

Zelenskyy wrote on Twitter that he and Blinken “agreed to continue joint & concerted action” and expressed his gratitude for the U.S. and allies providing “continued support of our sovereignty & territorial integrity.” Biden himself is expected to speak with Zelenskyy later this week.

The Kremlin has made clear that Putin planned to seek binding guarantees from Biden precluding NATO’s expansion to Ukraine. Biden and aides have indicated no such guarantee is likely, with the president himself saying he “won't accept anyone's red line.”

Psaki stressed “NATO member countries decide who is a member of NATO, not Russia. And that is how the process has always been and how it will proceed.”

Still, Putin sees this as a moment to readjust the power dynamic of the U.S.-Russia relationship.

“It is about fundamental principles established 30 years ago for the relations between Russia and the West,” said Fyodor Lukyanov, a leading Moscow-based foreign policy expert. “Russia demands to revise these principles, the West says there’s no grounds for that. So, it’s impossible to come to an agreement just like that.”

Beyond Ukraine, there are plenty of other thorny issues on the table, including cyberattacks and human rights. Kremlin spokesman Dmitry Peskov said U.S.-Russian relations are overall in “a rather dire state.”

Both the White House and the Kremlin sought in advance to lower expectations for the call. Both sides said they didn't expect any breakthroughs on Ukraine or the other issues up for discussion, but that just the conversation itself will be progress.