Home » World News » Before They Closed, Restaurants Opened Doors for Us

The last time I set foot inside a restaurant was Wednesday, March 11. I sat alone at a narrow counter in Flatbush, Brooklyn, and ate hot, gilded pupusas off a paper plate, spooning curtido — cabbage and carrots stung by chiles and vinegar — out of a communal jar. From where I live, the subway ride took me an hour and a half each way, longer than the meal itself, but it was worth it.

The next day the mayor declared a state of emergency. Within a week, the governor had ordered restaurants to close, allowing only takeout and delivery. News came that a chef I’d talked with a month before had died of the virus. By the end of April, close to six million restaurant workers across the country had lost their jobs, about half the industry’s employees and more than a quarter of all Americans who had lost work. To date more than 110,000 restaurants, one out of every six in the country, have closed, and more than two million jobs have not yet been recovered. 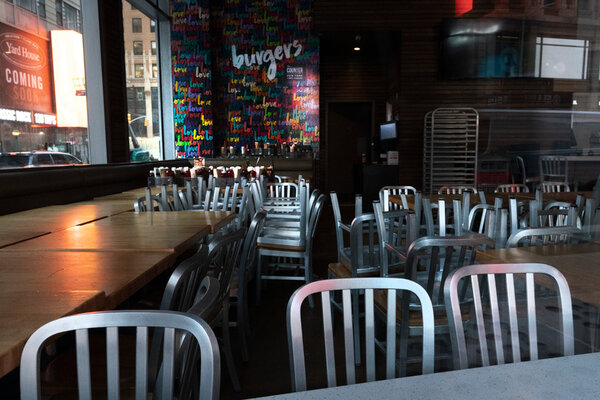 I used to be a restaurant critic, writing the Hungry City column in these pages. For now, that life is gone — the least of losses in this terrible pandemic, but still I mourn. Long before I wrote about restaurants, they were shimmers I chased along the sidewalk. They led me places; they welcomed me in.

How do we come to know worlds outside our own? When I was a kid in Honolulu, we clipped coupons and mostly ate at home. So I remember it still, the faintly illicit thrill of lunch after church on Sundays, spinning the great moon of a lazy susan at Duk Kee and discovering the miracle of cornbread — was it bread? was it cake? — at Yum Yum Tree.

On rare nights, my parents met friends at Columbia Inn, a diner on Kapiolani Boulevard run by the descendants of Okinawan immigrants. That’s where I first learned luxury: maraschino cherries, the reddest red I’d ever seen.

It felt opulent, too, to be led to a table saved just for us and to eat food we’d had no part in making, borne on plates spiraled so effortlessly up the waitress’ arm, they almost looked as if they were levitating.

To my dad, who grew up above a pub in Liverpool, England, restaurants any fancier were places to fear. And for years, whenever I stepped into a gleaming dining room to the clink of wineglasses, I felt like a spy infiltrating enemy territory — another, deeper thrill.

A restaurant can be a gateway, an escape, a promise of another life.

Once I left home, restaurants were an education in the exotica of mainland America. A soup bowl made out of bread. Oozy Kentucky Derby pie with fistfuls of chocolate chips sunk into the crust. Beer lapped out of a trumpet-mouthed glass a yard long.

At times, restaurants were salvation. When I was a broke graduate student who barely knew how to cook, the one Indian place in town kept me alive. Every Sunday I would circle the all-you-eat buffet — could it really have been only $5? how did the owners survive? — scavenging rounds of charred naan and trying to eat enough to last me the whole week. Afterward I’d stumble home and lie down in a daze, so full it hurt.

Later I worked in restaurants and gained a new language, of 86ed (nixed) and marry-the-ketchup (pouring one half-empty bottle into another); of burns, slashes and fingers with the ends shorn off, held above the head to slow the bleeding on the way to the hospital; of diners who refused to tip because they didn’t “believe in it.”

I was a hostess, and not particularly good at my job — there were nights when I saw in every customer a latent tyrant — but nevertheless, at the end of the shift, the servers gave me my cut. I’ll never forget the unexpected weight of those dirty beat-up dollar bills in my hand, and the power.

I learned New York City and all its contradictions through its restaurants, trawling the cash-only hand-pulled noodle shops on Eldridge Street in Chinatown, and sneaking into Jean-Georges at lunch hour for what was then a $28 two-course prix fixe, which ended with a cart wheeled to our table carrying a jar of marshmallows, wobbly strips that the waiter snipped apart with shears and presented with silver tongs.

New York was smoke in my hair from Korean barbecue, the Bubble Yum smack of Inca Kola at a Peruvian rotisserie in the Rockaways, the line for tacos de cabeza (head) and lengua (tongue) by the chain-link fence of a transit lot in Sunset Park, Brooklyn, and the long valley of the shadow of the elevated No. 7 line in Queens, where every cart had its secrets and its claim to an essential corner of the city.

It was Annisa in the West Village, where my husband and I went for New Year’s Eve like amateurs, newlyweds gawking at the edges of the high-end life; where I finally understood that food was an art form, capable of transcendence. It was Roman’s in Fort Greene, Brooklyn, where the menu was different every night but always exactly what we wanted to eat, and where we had a table the servers called ours.

It was Taste of Persia NYC, a takeout counter squeezed into the window of a Flatiron district pizzeria, selling fesenjan (walnut pomegranate stew) alongside triangles of pepperoni, and Indo Java, an Indonesian grocery in Elmhurst, Queens, with a lone foldout table in the back and lunch only on Tuesdays. It was Weekender Billiard, a Bhutanese snooker hall in neighboring Woodside, where young expats in Led Zeppelin T-shirts chalked their cues between bites of ema datse: green chiles, half-gutted but still garlanded with seeds — the most dangerous part — under melted squares of white American cheese.

When I began reviewing restaurants, I traveled farther, and the city opened itself up to me. To know New York, you had to take a subway and then a bus and then walk 20 blocks into the freezing wind. I measured my life in track changes and delays.

And yes, it was the best gig, and not just because of all I ate. What is food without the story of its making; what is a city without its people?

I found my teachers at roti shops and momo trucks. They were the tamales ladies opening their coolers after Spanish Mass, and the owner of the Sri Lankan restaurant on Staten Island who chauffeured me and my friends back to the ferry terminal himself, regaling us with tales of his former life driving taxis. “I was mugged!” he said.

This was my New York: the bare-bones Nigerian storefront (now shuttered) in Morrisania, in the Bronx, with a staff of one — a woman who came out of the kitchen to deliver the food she’d just cooked, then reached out and rolled up the sleeves of my sweater, so they wouldn’t fall into the plates. And the tiny Guyanese spot (now shuttered) in Bedford-Stuyvesant, Brooklyn, where the chef, when I told her that her restaurant would appear in The New York Times, started to cry.

So many of the restaurants I’ve loved were precarious to begin with, held together by duct tape and will. I know that it is the height of privilege for me to say, from the safe aerie of my sheltering-at-home, that I miss them, when the people who run them are the ones suffering.

But I do miss them, and the people who make them possible, and my city.

In his recent book, “The Disappearance of Rituals: A Topology of the Present,” the philosopher Byung-Chul Han writes that rituals “are to time what a home is to space: they render time habitable.” Now time sprawls, drags, does what it wants.

For me, the ritual of a meal at a restaurant was an anchor to the world, what Dr. Han calls “community without communication” — a way to belong without saying a word, subsumed in the clamor of other lives.

I didn’t know quite what to do when, a few weeks ago, a friend asked me to a new Filipino place on First Avenue. We were supposed to get takeout, then picnic in the park at a discreet distance, but it was pouring rain, so we perched uneasily at the very edge of the outdoor dining tent, wind whipping the nylon walls. A heater glowed but shed no heat.

We took turns taking off our masks to eat, and slowly I realized how familiar this was — a throwback to wintry nights clutching salty-hot Xinjiang-style skewers in foil under the Brooklyn Bridge, or unwrapping tacos in a gas-station parking lot, salsa leaking through my fingers. It was scrappy, improvisational, making do.

Mighty trucks blustered by, unseen. Cyclists barreled down within inches of the table. This was New York, life shuddering all around us, and the food kept coming.

LOCKDOWN could be "gradually eased" from early March, vaccine minister Nadhim Zahawi said this morning. Once the bulk of the