Australia backs the US, saying there is ‘no legal basis’ to several Chinese claims in the disputed sea. 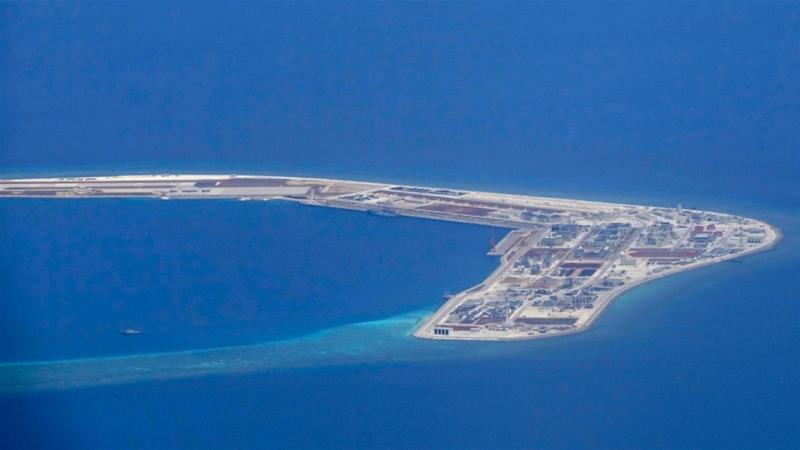 Australia has rejected Beijing’s territorial and maritime claims in the South China Sea in a formal declaration to the United Nations, aligning itself more closely with the United States in the escalating row.

In a statement filed on Thursday, Australia said there was “no legal basis” to several disputed Chinese claims in the sea, including those related to the construction of artificial islands on small shoals and reefs.

“Australia rejects China’s claim to ‘historic rights’ or ‘maritime rights and interests’ as established in the ‘long course of historical practice’ in the South China Sea,” the declaration read.

“There is no legal basis for China to draw straight baselines connecting the outermost points of maritime features or ‘island groups’ in the South China Sea, including around the ‘Four Sha’ or ‘continental’ or ‘outlying’ archipelagos.”

The declaration comes after US Secretary of State Mike Pompeo declared Beijing’s pursuit of territory and resources in the South China Sea as illegal, explicitly backing the territorial claims of Southeast Asian countries against China’s.

Beijing claims almost all of the South China Sea based on a so-called nine-dash line, a vague delineation from maps dating back to the 1940s.

The latest escalation comes in advance of annual talks between Australia and the US, with ministers travelling to Washington, DC for the first time since Australian borders were closed due to the coronavirus pandemic.

The meetings come at a “critical time” and it is essential they are held face-to-face, Foreign Minister Marise Payne and Defence Minister Linda Reynolds said in a statement on Saturday.

US relations with China have markedly deteriorated in recent months, especially over trade disputes, the coronavirus pandemic and Beijing’s crackdown on dissent in Hong Kong.

On Friday, Beijing ordered the US consulate in Chengdu to shut in retaliation for the closure of its Houston mission over accusations of being a hub for intellectual property theft.

“We face a public health crisis, economic upheaval and resurgent authoritarian regimes using coercion in a bid to gain power and influence at the expense of our freedoms and sovereignty,” they wrote.