Public-health experts warn Australia has been let down by a “narrow- minded” immunisation strategy, which failed to hedge bets on enough vaccines, leaving the nation worryingly behind in its rollout.

But leading vaccine experts and the Australian Medical Association say the safety issues that arose with AstraZeneca were unforeseeable when the decision was made to buy 53.8 million doses of the vaccine last year. 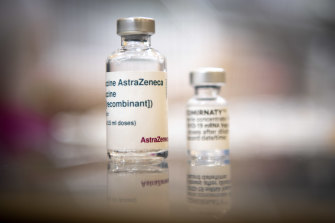 The AstraZeneca vaccine is now recommended for those aged over 60.Credit:Eddie Jim

In another disruption to the troubled vaccine rollout, the federal Health Department released its long-awaited modelling on Wednesday night, forecasting that the vaccine would be phased out, with demand falling after over-60s have been immunised.

The decision has fuelled concern about thousands of vials of the vaccine being wasted as patients cancel their AstraZeneca appointments in droves.

It comes days after Australia’s top immunisation advisers made the call to limit the AstraZeneca vaccine to over-60s due to the concerning number and severity of non-fatal cases of a rare blood clotting condition.

Murdoch Children’s Research Institute vaccine uptake expert Margie Danchin said several countries around the world made the “very reasonable” decision to choose AstraZeneca last year, given it did not have cold-chain requirements like Pfizer did, which then could only be used if it was refrigerated at minus 70 degrees.

“It was an extremely appealing vaccine because it could be deployed easily and manufactured here in Australia,” she said.

“It had really good clinical drug trial data. In fact, in the clinical trials it had the lowest number of clots of all the vaccines in terms of adverse events that were being monitored for. Nobody could have ever anticipated this rare and serious adverse event clotting syndrome.”

But Professor Bill Bowtell, a strategic health policy consultant with the University of NSW, said the federal government had relied too heavily on AstraZeneca.

“We’re here because a year ago the Australian government, with eyes wide open, rejected the logical thing to do, which was to back every horse in the race,” Professor Bowtell said.

“Now, we are in a very serious position and it is fundamentally because they made appalling decisions a year ago that stopped us having more supply of Pfizer and Moderna.”

Professor Bowtell, an architect of Australia’s response to the HIV AIDS crisis, is among the most vocal critics of the vaccine rollout.

“We are seriously behind every comparable country across the world because we should have been funding manufacturing and investing in mRNA vaccines last year,” he said pointing out only 3 per cent of Australia’s adult population was fully vaccinated against COVID-19 compared to more than 50 per cent in Israel and about 45 per cent in Britain and the US.

Evidence is increasingly pointing to mRNA coronavirus vaccines, such as Pfizer and Moderna, being much easier to reconfigure to cover emerging and highly infectious variants of coronavirus than more conventional types of inoculations such as AstraZeneca.

But mRNA vaccines had never been used in humans before the coronavirus pandemic and Professor Danchin, who is a non-voting member on the Australian Technical Advisory Group on Immunisation that advises the government on vaccines, said health officials had shown “appropriate caution” by waiting until results from clinical trials flowed in.

“There was a hesitancy to bank completely on Pfizer and Moderna because they were a bit unknown,” she said. “I don’t think anyone could have anticipated just how effective they have shown to be.”

Australian Medical Association president Omar Khorshid believes the government made the right call to invest in two international vaccines: Pfizer and Novax, alongside two locally manufactured in the AstraZeneca and the University of Queensland’s the molecular clamp vaccine, which failed during clinical trials.

“Even with the benefit of hindsight, it was a pretty good and considered decision,” Dr Khorshid said. 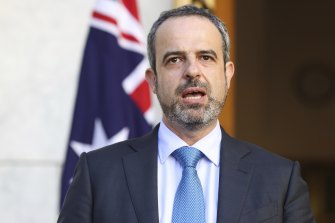 “If you look at where we would have been if we didn’t have any local manufacturing of vaccines, it’s hard to know. AstraZeneca has underpinned the bulk of our program and the fact that 65 per cent of our upper 70s are at least partially protected from COVID.”

Former secretary of the Commonwealth Department of Health Professor Stephen Duckett said Australia’s vaccine program was doomed from the start because it had limited itself to a narrow of range of vaccines, leaving the country largely unvaccinated and vulnerable to dangerous COVID-19 outbreaks.

“We were much, much more narrow in our investment decisions than practically every other advanced economy in the world. Other countries hedged their bets across six, seven or eight vaccines, but we only chose four.”

Professor Duckett, who had his first dose of AstraZeneca recently, said he would not hesitate to book in his second shot in a few weeks time.

But he said many people in the over 60s age group had lost confidence in the vaccine due to the serious but rare side effect, despite AstraZeneca being highly effective at preventing disease.

“We really have to get vaccination rates up amongst people over 60 up to the 95 percent level,” Professor Duckett said. “That is critical, but realistically that might not happen until more Pfizer is available.”

While Dr Khorshid acknowledged that had the government acted more quickly it may have secured “a huge amount of Pfizer early on”, he said deliberations about the vaccines occurred in a climate of significant constraints on international supplies globally.

The first batch of 3.3 million doses of AstraZeneca allocated for Australia from Europe never arrived, setting the rollout back by several weeks, and fuelling concerns other doses from overseas would also be stalled.

Dr Khorshid said his biggest concern in coming months was ensuring Australians who had their first dose of the AstraZeneca vaccine booked in for their second shot.

He said it was critical Australia finished its vaccine rollout of AstraZeneca for the millions of Australians who had already had their first dose.

“We can’t let this uncertainty undermine the rollout further,” he said. “The second dose of AstraZeneca is critical for immunity and for anyone who has exposed themselves to the first dose having the second shot is extremely safe.”

“From a scientific point of view, it’s an absolute no-brainer. Everybody who has their first dose of AstraZeneca whether you’re 20 or 90, should have their second for full protection against the virus.”

“We foresaw what occurred in Europe and North America,” Mr Hunt said. “Without ever knowing what would be the specific outcome, we could see vaccine nationalism, international supply chain challenges, countries withholding vaccines.”

A spokeswoman for AstraZeneca said the company had no plans to halt production following the announcement the vaccine would be phased out in Australia.

“We are committed to fulfilling our contract with the Australian Government,” she said.

“The AstraZeneca vaccine is helping to save tens of thousands of lives and prevent hundreds of thousands of hospitalisations due to COVID-19 and extensive data from clinical trials and real-world evidence from millions of people shows that our vaccine is highly effective against all forms of the disease.”

Stay across the most crucial developments related to the pandemic with the Coronavirus Update. Sign up to receive the weekly newsletter.