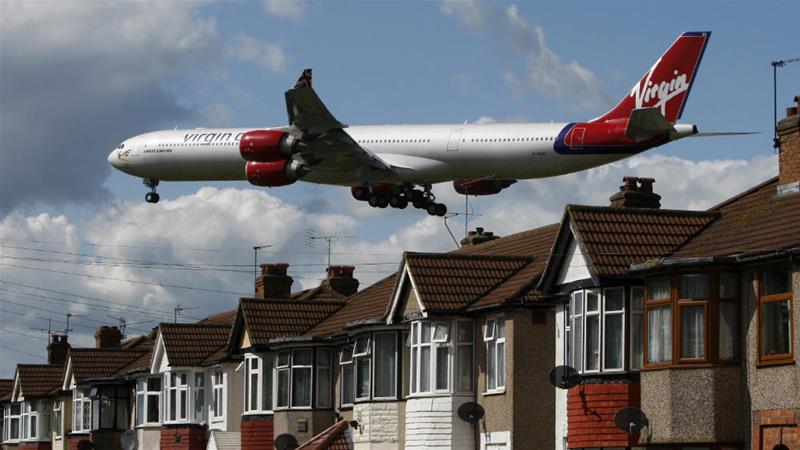 Climate change activists who planned to disrupt Heathrow airport with drone aircraft were frustrated early on Friday as the devices failed to fly and Europe’s largest airport continued to operate as usual.

The Heathrow Pause group aims to ground flights by illegally flying drones within five kilometres (three miles) of an airport, to put pressure on the government to take tougher steps to reduce carbon emissions.

But the airport said that the attempted action was not affecting flights.

Police arrested two men at the British airport on Friday on suspicion of conspiracy to commit a public nuisance in relation to operations at the airport, and have established a dispersal zone around the airport for 48 hours.

Seven others were arrested on Thursday away from the airport on the same grounds.

After initial attempts on Friday failed, the campaigners said they successfully launched one drone flight. A man claiming to have piloted that drone has handed himself over to police and was arrested.

Heathrow Pause said authorities had used signal jamming to frustrate the early flights, as they posted a livestream of activists near the airport on a Twitter feed.

“We’ve got a little technical glitch. The drone isn’t flying,” an unidentified campaigner says in the video, as another activist holds a drone in the air.

“Unfortunately at this time I don’t have any specific updates what the next steps will be.”

Heathrow Pause opposes the expansion of the airport, whose third runway was approved by legislators last year.

Earlier this week, police said they were confident Friday’s action would not lead to a repeat of the chaos seen at Gatwick last December when drone sightings grounded planes in the run-up to Christmas.

But they warned that attempted disruption of the airport and flying drones without permission in the exclusion zone were serious crimes.

Heathrow Pause, a splinter group of the Extinction Rebellion climate movement which disrupted the streets of London earlier this year and which is also behind Friday’s action, said it would fly the drones at no higher than head level and say they are not looking to endanger life.

Heathrow has said the demonstration was counterproductive and criminal, adding that despite talks between the two sides, the campaigners disagreed with the airport’s belief that aviation can and should be decarbonised.

Activists said on Friday the group would hold demonstrations in London from October 7, with the aim of shutting down major roads near Britain’s parliament in Westminster.

“[Extinction Rebellion] will shut down London from 7 October to force their government to #ActNow on the climate and ecological emergency,” the group said in a tweet, adding that groups across the world would gather in key cities to rebel.

One way to celebrate Black voices is to read work by Black women authors. These books can help Black readers

Michelle Keegan and Mark Wright have sparked reports they may be looking to start a family in the near future,

When is the next UK lockdown review?

LOCKDOWN rules will stay in place for a further seven days after Matt Hancock quietly lengthened the review period. The

Mom of six Kim Zolciak, 42, poses in teeny white swimsuit- and slams fan who accuses her of photoshopping pic – The Sun

Disheveled Mama June breaks down in tears at reunion with daughter Pumpkin, 20, as she faces jail time for drug charges

06/04/2020
Recent Posts
We and our partners use cookies on this site to improve our service, perform analytics, personalize advertising, measure advertising performance, and remember website preferences.Ok