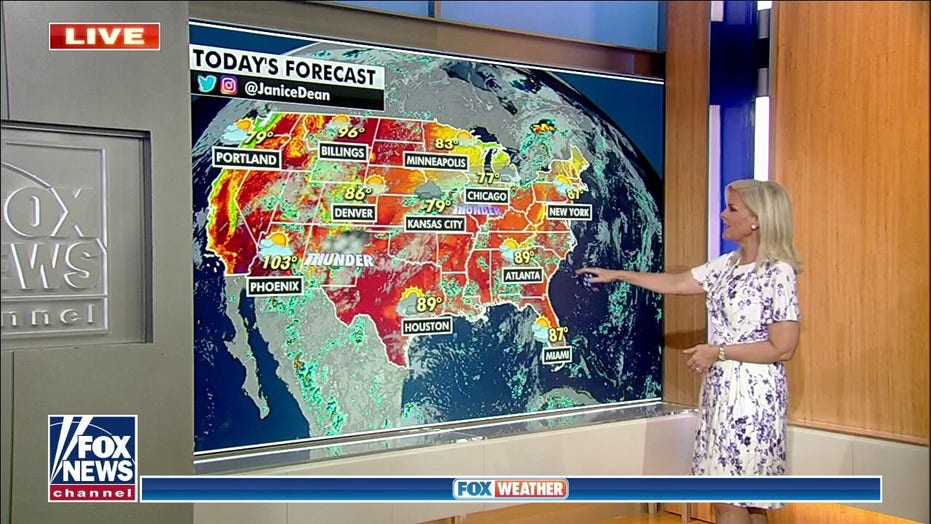 Janice Dean has your FoxCast.

After weeks of scorching heat and devastating drought, Arizona cities have been inundated with flash flooding.

Residents of the Copper State – which has been ravaged by wildfires, some sparked by lightning, both before and during the state’s monsoon season – watched, snapped photos and recorded videos as floodwaters flowed through intersections and lifted cars in residential neighborhoods.

In a video posted by Golder Ranch Fire District, firefighters could be seen rescuing a man and his two daughters from the roof of their vehicle on Wednesday after it was swept away.

Tens of thousands of residents were under advisories on Wednesday and the Coconino County Emergency Management officials issued a shelter-in-place order in response to the threat.

Neighborhoods east of Flagstaff were primarily impacted – menacing the communities of Flagstaff, Doney Park and Winona – and rushing waters in downstream neighborhoods were expected as a byproduct of a burn scar from 2019’s 1,961-acre Museum fire.

“The Museum Fire Burn Area received just over 1″ of rain today. Although the rain amount and intensity was lower today than yesterday, the rain fell over a longer period of time. Furthermore, rain from within the flood area compounded the impacts of the flooding from the burn area,” the Arizona Emergency Information Network (AZEIN) explained in a Wednesday release. “The ground in the Museum Flood Area is also becoming more saturated and the watershed is becoming more responsive. This means additional flooding is expected in future rain events, which the National Weather Service predicts for the remainder of the week and weekend.” Flash flood watches were also issued by the National Weather Service (NWS) in metro Phoenix, Tucson and large parts of central, southern and northwestern Arizona from Tuesday through yesterday evening.

In the wake of the flooding, streets have been left cluttered by debris and drains have been clogged.

To keep safe, those impacted are advised to move to higher ground, shelter in place and never enter floodwaters.