Vox has doubled its number of MPs, and could remain influential for some time, analysts warn. 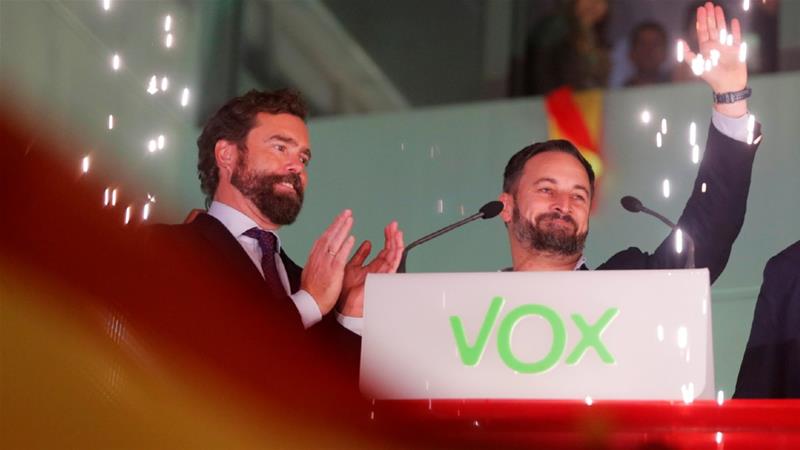 Madrid, Spain – Eight days ago, as the rain poured down on the Spanish African enclave of Ceuta, a white van containing 34 men, 16 women and two children approached the El Tarajal frontier post at high speed. After smashing through two checkpoints, the driver continued for another kilometre before halting.

Such desperate, high-profile bids by migrants to reach EU-controlled territory are often seized on by Europe’s hard-right parties to make a political issue. And that includes the newest high-profile addition to the club – Vox, in Spain, where the dust is still settling from the party’s recent huge success in November’s general election.

Thanks to the polls on November 10, Vox has more than doubled its number of members of Spain’s parliament, to 52. It was a remarkable result for a political formation just five years old and, as little as 15 months ago, regularly polling less than 2 percent of votes.

Beyond the headlines, though, pinning down what consequences Vox’s ferociously ultraconservative cocktail of policies actually may have; how Vox’s 52 newly elected MPs view those 52 migrants in Ceuta, for example, and why those policies are suddenly proving so popular in Spain is a complex process, political analysts say.

“Separatism in Catalonia, high levels of precarious employment and migration were all underlying causes for the big increase in support,” Jaime Aja, professor of sociology at the University of Cordoba, told Al Jazeera.

“But what really lit the fuse were a series of internal crises in the Partido Popular (People’s Party – PP) party, in the second half of 2018 – about a year after the Catalan independence bid was at its height.

“The PP had previously absorbed almost all the different branches of the right in Spain. But in 2018, the containing walls between those different factions start to collapse – and a significant segment quit altogether, for Vox.”

After capturing just 50,000 votes across Spain in 2015, Vox’s support has now hit 3.5 million, making particularly deep inroads into former PP strongholds such as the southeasterly region of Murcia and the north African Spanish enclave city of Ceuta – separated by 14km from the Spanish mainland by the Strait of Gibraltar – where Teresa Lopez has captured the sole parliamentary seat for Vox.

One of the party’s most controversial aims is to replace Ceuta’s perimeter fencing with what they call “an unbreachable, impenetrable” wall to keep out what Lopez described in a recent local TV interview as “the invasion from Africa”.

Al Jazeera’s repeated requests for an interview with Teresa Lopez did not receive a response from Vox.

Vox are equally uncompromising on Catalonia, where they are calling for the criminalisation of all nationalist parties, as well as fiercely opposing gay marriage and gender-violence laws – which they say discriminate against men.

“You can see the influence of other hard-right EU parties in Vox’s attacks on what they call ‘the globalising elite,'” Professor Aja argued. “But they are much less Eurosceptic than some of their counterparts, possibly because Spain is generally pro-EU.”

The biggest difference, though, is in support: “Whereas in other parts of Europe the hard right is backed by social classes already badly affected by an economic depression, here a segment of former PP voters are shifting towards Vox – the younger generation of middle-classes, who are particularly scared of an unexpectedly precarious economic future. They are looking for something to blame, and Vox have provided the targets.”

The feminist movement is one such scapegoat for Vox – with one of their best-known politicians in southern Spain, regional parliament MP Francisco Serrano, describing feminism as “gender jihadism” and the work of “feminazis”.

Vox’s no-holds-barred criticism has sparked a strong reaction. “These kinds of people have always existed in Spanish society, but they were hidden away and now they’re getting permission to say what they want,” May Serrano of the Bilbao-based women’s collective La Quinta Ola tells Al Jazeera.

“They’re not just attacking women’s rights, they’re against migrants, too – all the weakest elements they can find.”

Serrano was particularly critical of Spain’s other right-wing parties for relying on Vox’s votes to control some regional governments or town halls – as in the capital, Madrid.

Monday was the International Day for the Elimination of Violence Against Women, but for the first time in 15 years, there was no official all-party statement in the Spanish capital condemning gender violence, because Vox refused to sign.

It’s not hard to find concern in Spain’s LGBT+ communities over the rise of Vox. “Ever since the elections, on Facebook, you read about more cases of homophobia,” says Jose Ruanco, an artist in Andalucia whose upcoming marriage with his long-standing partner would not be permitted if Vox were in power.

“Imagine Vox win an election in Spain,” he added. “It’d be terrifying.”

And Germa Capdevila, a political analyst with naciodigital.cat, believes there has been one unexpected consequence of their ideas in Catalonia.

In this week’s crucial negotiations between Spain’s Socialists and Catalonia’s biggest party, the ERC, to allow the Socialists to form a government, Capdevila says “the ERC are not playing hard-ball”.

“The ERC is worried about a possible right-wing coalition containing Vox, if the Socialist government doesn’t happen. In my opinion, thanks to Vox’s increased influence in Spanish politics, the chances of a deal between the ERC and the Socialists this week are actually greater.”

While some analysts argue Vox’s surge in popularity was simply a one-off protest vote, the ways in which Vox could affect Spain in the longer term are harder to predict.

Professor Aja observes “there hasn’t been an explosion in racist feeling in Spain. In polls, when people say what their main problems are, only 10 percent at most say it’s migration”.

“So, more than Vox’s current results, what’s really dangerous is how their narrative is worming its way into Spanish society in general.

“Because if there’s a crisis, the breeding ground for such an outbreak of racism – all the lies like ‘migrants are draining the health service’s resources’, or ‘there’s no work because of migrants’ – is now up and running.”

Meanwhile back in Ceuta, the latest figures show the number of migrants attempting to reach the enclave by land dropped by 35 percent in the first nine months of 2018, and – in accordance with orders from Madrid – controversial segments of razor wire in the perimeter fence, which have injured migrants trying to break in, are soon to be removed.

However, Vox’s proposal of a wall in Ceuta remains in place, too. And so, too, does the support that Vox enjoys across Spain.