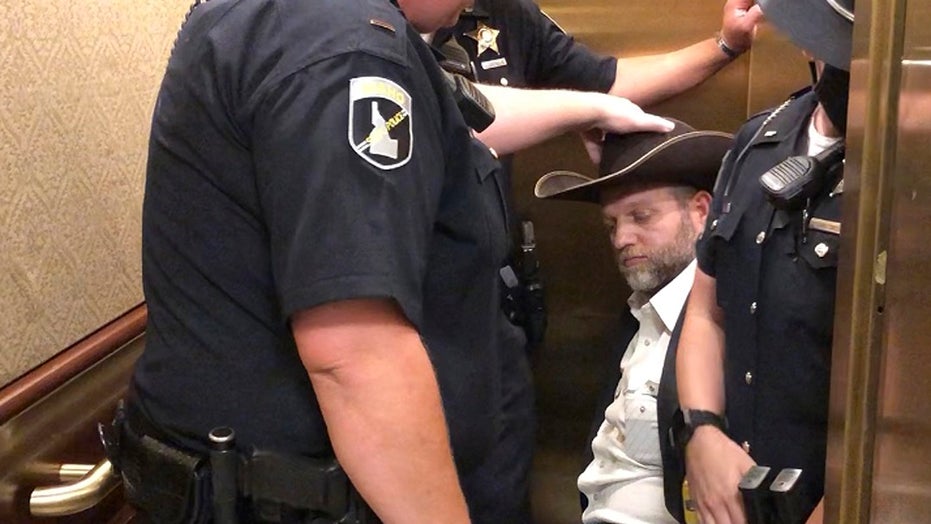 Ammon Bundy, known for leading an armed militia that took over an Oregon wildlife preserve protesting federal land policies in 2016, was arrested at the Idaho Capitol on Tuesday after refusing to leave a hearing room, according to media reports.

Bundy was arrested around 5 p.m. after attending a session on a civil liability bill earlier in the day that was disrupted by protesters, the Idaho Press reported. The hearing was long over and lawmakers had adjourned for the day.

Before his arrest, he told the news outlet he was upset about "citizen journalists" being removed from the proceedings and sat at the press desk in an apparent form of protest.

Bundy refused to stand when approached by authorities, so he was handcuffed to a chair and led out of the building. Two other people also were reportedly removed. All three face misdemeanor charges for trespassing.

During the meeting, Republican Rep. Greg Chaney directed two people sitting in an area reserved for credentialed members of the media to leave those seats. Press credentials are controlled by the Capitol Correspondents Association.

“I'm not sure precisely what their goal is, but I'm absolutely sure that the two individuals whom I asked to leave were intending to create a scene," he said. “At times in the last 24 to 36 hours, this building has descended into complete chaos, and the only way to make sure that all citizens feel comfortable coming here to be heard is to make sure that we don't allow rule deviations in general.”

Tuesday's events followed a disruption the day before, when protesters burst into the House gallery and glass on a door was smashed. The area had limited seating because of the coronavirus pandemic.

Bundy testified Monday against the proposed civil liability legislation intended to shield schools, businesses and government agencies from lawsuits from people infected with the virus. 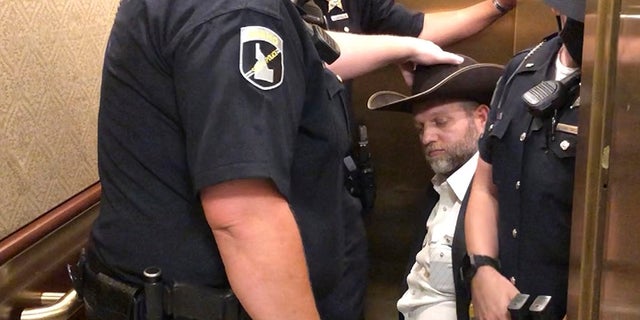 This image taken from video shows anti-government activist Ammon Bundy, rear, being wheeled into an elevator in a chair following his arrest at the Idaho Statehouse in Boise, Idaho on Tuesday. Authorities arrested Bundy after he refused to leave a meeting room where a few hours earlier angry protesters forced out lawmakers. (AP Photo/Keith Ridler)

“The Idaho people are more than capable of keeping themselves safe. … We, the people, are tired," he told lawmakers. "We are tired of government force, and we will only take it for so long. I recommend you act wisely, because we will not live in fear.”

Bundy has become a hero in anti-government circles over a series of disputes with the federal government in recent years.

In 2016, he led a nearly six-week occupation of the Malheur National Wildlife Refuge in eastern Oregon following the sentencing of two ranchers for arson, but who had been at odds with the federal government over water and grazing rights.

Bundy eventually was acquitted of all charges for his role in the takeover.

In 2014, he participated in a standoff with his father, Cliven, who for years had refused to pay grazing fees and battled the Bureau of Land Management over the unpaid fees. 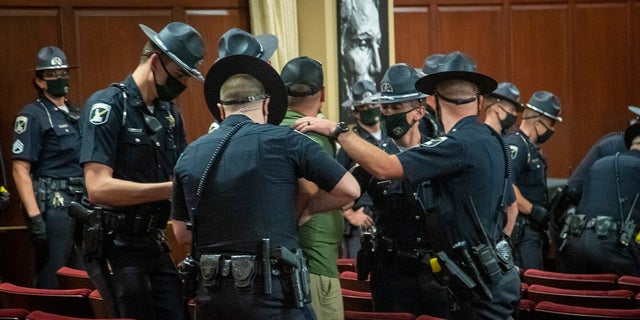 Idaho State Police arrest a man who refused to leave the Lincoln Auditorium in the Idaho State Capitol on Tuesday in Boise, Idaho. (Katherine Jones/Idaho Statesman via AP)

When the government sent agents to Nevada to confiscate his cattle in 2014, hundreds of protesters came out to support the elder Bundy. A federal judge dismissed charges against the father and son after accusing prosecutors of withholding evidence from lawyers.