Washington: The family of George Floyd met privately with President Joe Biden and pressed congressional leaders to strike a deal on a massive policing package one year after police killed Floyd on a south Minneapolis street. 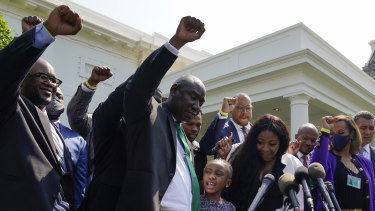 Lawyer Benjamin Crump, front centre, along with Gianna Floyd, daughter of George Floyd, and her mother Roxie Washington, and others talk with reporters after meeting with President Joe Biden at the White House.Credit:AP

He described Biden as a “genuine guy,” and said the family was thankful. But he also made clear they want to see police reform legislation named after George Floyd signed into law.

In March, House Democrats passed the George Floyd Justice in Policing Act. The legislation was strongly opposed by Republicans, who favoured a less sweeping series of changes.

After the family met with Democratic House Speaker Nancy Pelosi and Representative Karen Bass, California, in the morning, Pelosi told reporters, “They were lovely, they’re optimistic, they’re positive, but they’re determined that we will get something done.” 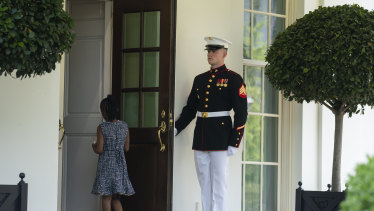 “Extraordinary courage”: A Marine holds the door as Gianna Floyd, the daughter of George Floyd, walks into the White House.Credit:AP

Ben Crump spoke to reporters following a series of meetings with members of Congress of both parties.

Outside the White House, Brandon Williams, George Floyd’s nephew, said the president showed concern, and wanted to see how the family was doing and how he could support them.

“He did let us know that he supports passing the bill, but he wants to make sure that it’s the right bill and not a rushed bill,” Williams said. And on the deadline, Williams said Biden is “not happy about it not being met, but all in all, he just wants the bill to be right and meaningful and that it holds George’s legacy intact.”

One family member stayed away. His sister Bridgett Floyd said in Minnesota that she will only travel to Washington when a bill is ready to be signed into law.

The reckoning on racial justice and policing stemming from Floyd’s killing last May hasn’t been lost on Biden. The Democrat has put the Floyd family’s experience front and centre during major moments this year.

On the day former Minneapolis police Officer Derek Chauvin was convicted of Floyd’s murder, Biden and Harris called the family. The president could be heard telling the family they were “incredible” and “we’re all so relieved,” shortly after the verdict was announced. He later addressed the nation in a televised speech and called for further action and change in Floyd’s memory by May 25.

An effort to find a bipartisan compromise in the Senate remains underway. Biden nodded to those talks in a statement after the Oval Office visit with the Floyd family. “It’s my hope they will get a bill to my desk quickly,” said Biden.

Yet Republicans and Democrats are deeply divided on police reform, even within Minnesota’s congressional delegation.

“While it is disappointing that we have been unable to come up with an agreement on police reform, we will take as long as need be to get this legislation right,” Minnesota Republican Representative Pete Stauber, a former police officer, said in a statement. “I will never support bad legislation just for the chance to say that we got something done in this space.”

The meeting between Biden and the Floyd family is “deeply symbolic,” Minnesota Senator Tina Smith said in an interview beforehand, and shows “the commitment that the president has to moving our country forward on racial justice.”

“Missing this deadline, at the end of the day, will be less important than the strong bill that we have to pass,” Smith, a Democrat, said about the legislation named after Floyd.

Despite the family’s grief, their trip to DC included some warm moments. Chris Stewart, a member of the family’s legal team, said Biden played with George Floyd’s young daughter Gianna, who “had an absolute ball.”

The President said in his own statement that “the Floyd family has shown extraordinary courage,” and singled out Gianna in particular.

“Being here today is an honour, to meet with the President and the Vice-President and for them to show their concern to our family and for them to actually give an ear to our concerns and how we feel on the situation,” said Terrence Floyd, George’s brother. “I feel it was a very productive conversation, and I’m grateful for it.”

The community in Minneapolis also marked the event with an outdoor gathering.

A few hundred people gathered at The Commons park where musicians performed at an event hosted by the George Floyd Memorial Foundation. It was the atmosphere of a block party, including food trucks and a bouncy house, all punctuated with calls for reform.

However, at George Floyd Square a few feet from where he was killed a year ago violence in the city was again on display: Shots rang out, sending scores of people scrambling for safety.

Stray bullets shattered a window and ripped into a tour bus as parents sprinted to find children who moments earlier had been playing nearby.

An individual later sought treatment after the shooting for a non-life-threatening gunshot wound at a nearby hospital, authorities said.