In what universe is this week’s Freedom Day in the unmentionable state to the north fair?

During the 18-month long war against the virus Melburnians have done more than the nation’s – nay, the world’s! – share of heavily lifting only to endure the humiliating spectacle of liberation in Sin City. 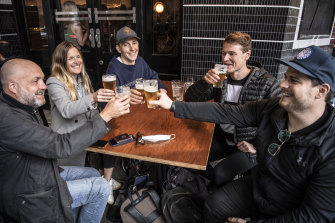 Locals enjoy a drink in Sydney’s Surry Hills to celebrate the end of lockdown. Credit:Wolter Peeters

How did it go, their Freedom Day, as freshly minted Premier Dominic Perrottet insisted on calling it, aping that Churchill-channelling bozo from the mother country?

How did it go, their Victory in the East day, kicking off freedom for all eternity, assuming France doesn’t decide to teach Australia a lesson about the sanctity of contract and invade? Last I looked, around 11am Monday, the reports were of people taking the day off to enjoy haircuts and cafes, and paramedics on high alert for drunken brawls like Oslo experienced after the lifting of coronavirus restrictions last month. Then I averted my eyes.

Some of the people I love most in the world live in Syd – that place. But so depleted are my reserves of magnanimity, so virulent the latest outbreak of parochial venom within, that I found myself praying for a week-long unseasonal cold snap to rain on their parade. 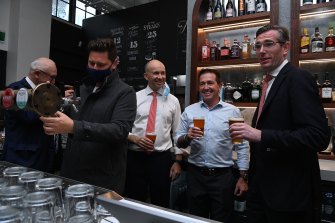 This is the narrative, as most Melburnians see it: last year we locked down for nearly four months to suppress a second coronavirus wave caused in equal parts by the Andrews government’s incompetence and the federal government’s negligence in not building fit-for-purpose quarantine facilities.

Then in June Delta slipped into the country seeding a cluster in Sydney (OK, I’ve said it), and as the outbreak grew, Gladys – the former Premier’s name having become an ideological signifier – believing in the myth of NSW COVID exceptionalism, was slow to lock the city down, thus making the virus’ seeping into Victoria all but inevitable, sending us into another protracted lockdown, and necessitating the federal government’s redirecting Pfizer supplies to NSW to arrest the mounting death toll and hospital chaos.

Some might argue that once in, Delta was never going to be eradicated so the hindsight judgment against the Berejiklian government is overcooked. And even the most contemptuous of Victorians, even I, concede vaccines must go where they’re most needed.

The point is: NSW won the race. Emphatically. On Freedom Day, they’re 70 per cent double-dosed, hurtling towards 80. Meanwhile, we’re trundling towards 60. 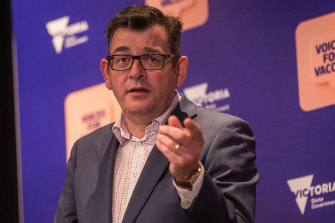 The Andrews government will allow 10,000 spectators at the Melbourne Cup on November 2. Perrottet gave approval for 10,000 punters to attend The Everest race day at Royal Randwick. On Saturday.

As soon as he seized the top job, Perrottet announced a further easing of restrictions: 10 guests at home, up from five, gatherings of 30 outside, up from 20. A staggered return-to-school had already been brought forward a week as official reward for “the heroic vaccination efforts of NSW”.

No such rewards in Victoria where the Andrews government has all but outsourced decision-making to health bureaucrats and no overreach is considered an overreach. Where curfews are brought in because “why not?”, where no indignity is too small to escape the imagination of paranoid micro-managers.

When kids go back to school, Years 3 and up will have to wear masks because down here even eight year-olds must shoulder the public health burden. These are some of the same children denied access to playground equipment, and then allowed access but only if accompanied by a solo parent who had to remain masked for the duration of the outing, even at risk of dehydration. 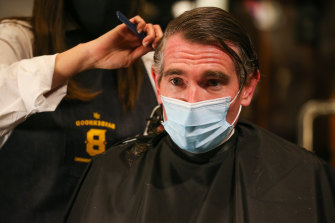 In Victoria, Daniel Andrews is fined $400 for not wearing his mask as he walked across the sparsely populated Parliament car park when he couldn’t possibly have posed a serious COVID risk to any living human, but the infraction was captured on film – we watched the action shot over and over –so his being fined was the price of maintaining the already strained bonds of civic trust.

Still – when we hit 70 per cent vaccinations we can shop outside (I don’t get it either).

On the other hand, in a gob-smacking concession to frivolity, the same government once prepared to risk dehydrating its citizens rather than give the virus an inch, has, by order of the Chief Health Officer, allowed the removal of masks outdoors for the consumption of alcohol. After all, Victoria is still nominally part of Australia and with the border closures Australia is especially Aussie, so woe betide the leader who, as the weather gets warmer, insists on dry gatherings in parks. All very well to face-mask the kids but adults need to get on the beers.

Note: Perrottet has already held two press conferences in pubs. I’m assuming he wasn’t sloshed when he said he hoped Freedom Day gives Victorians “hope” about what lies ahead. He said NSW would also take the lead on the ingathering of exiled Australians overseas.

He cuts a messianic figure. His hair is freshly trimmed. In Melbourne, lady gardens stretch to the knees.

We’ve copped a raw deal during COVID. But ask me which state can proudly claim the moral high ground and with all due respect to NSW, it’s simply no contest.

Julie Szego is a regular columnist.