WASHINGTON — The growing risk of overlapping heat waves and power failures poses a severe threat that major American cities are not prepared for, new research suggests.

Power failures have increased by more than 60 percent since 2015, even as climate change has made heat waves worse, according to the new research published in the journal Environmental Science & Technology. Using computer models to study three large U.S. cities, the authors estimated that a combined blackout and heat wave would expose at least two-thirds of residents in those cities to heat exhaustion or heat stroke.

And although each of the cities in the study has dedicated public cooling centers for people who need relief from the heat, those centers could accommodate no more than 2 percent of a given city’s population, the authors found, leaving an overwhelming majority of residents in danger.

“A widespread blackout during an intense heat wave may be the deadliest climate-related event we can imagine,” said Brian Stone Jr., a professor at the School of City & Regional Planning at Georgia Institute of Technology and the lead author of the study. Yet such a scenario is “increasingly likely,” he said.

The findings come just months after a winter storm knocked out power for millions of people in Texas, causing more than 150 deaths and demonstrating how easily severe weather can overwhelm electrical grids and other infrastructure.

But as much as winter storms and extreme cold remain a threat, the greater risk to human health as temperatures rise is from extreme heat.

Heat is already the most dangerous type of severe-weather event, by one estimate killing some 12,000 Americans each year. And climate change is making heat waves more frequent and severe.

The changing climate also seems to be making power failures more common. From 2015 to 2020, the number of blackouts annually in the United States doubled, Dr. Stone said. And those blackouts were more likely to occur during the summer, suggesting they were being driven in part by high temperatures, which increase demand on the electrical grid as people turn up their air-conditioners. 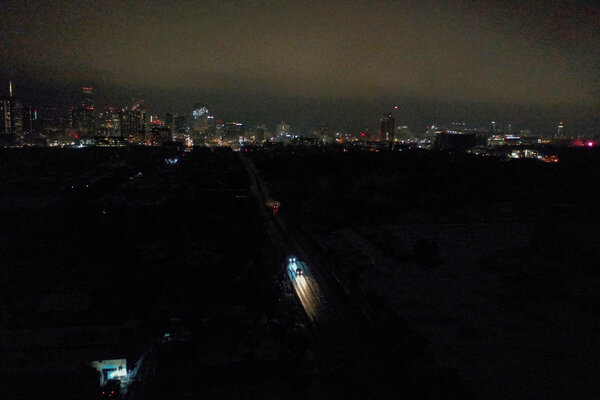 Because both heat waves and blackouts are becoming more frequent, “the probability of a concurrent heat wave and blackout event is very likely rising as well,” Dr. Stone said.

So Dr. Stone, along with a team of eight other researchers — from Georgia Tech, Arizona State, the University of Michigan and the University of Guelph in Ontario, Canada — set out to gauge the human health consequences when power failures coincide with heat waves.

To do that, they picked three big cities — Atlanta, Detroit and Phoenix — and looked at recorded temperatures during some of their most severe heat waves.

Next, they used computers to model the temperatures in different neighborhoods if those heat waves were to hit at the same time that a citywide blackout disabled air-conditioners.

Crucially, the researchers wanted to know how hot the insides of homes would get under those conditions — something that Dr. Stone said had never been tried before. They collected data showing the building characteristics for every single residential structure in each city — for example, building age, construction material, level of insulation and number of floors.

The results were alarming. In Atlanta, more than 350,000 people, or about 70 percent of residents, would be exposed to indoor temperatures equal to or greater than 32 degrees Celsius (89.6 degrees Fahrenheit), the level at which the National Weather Service’s heat classification index says heat exhaustion and heat stroke are possible.

In Detroit, more than 450,000, or about 68 percent, would be exposed to that indoor temperature. In Phoenix, where a vast majority of residents rely on air-conditioning, the entire population would be at risk — almost 1.7 million people.

Even without a blackout, some residents in each city lack access to air-conditioning, exposing those residents to dangerous indoor temperatures during a heat wave. Those numbers range from 1,000 people in Phoenix to 50,000 in Detroit, based on the characteristics of their homes, the authors found.

The authors reported that each city had designated public cooling centers for extreme heat. But they found that in each case, those centers could accommodate just 1 percent to 2 percent of the total population.

And none of the three cities requires those cooling centers to have backup power generators to run air-conditioners in case of power failures.

“Based on our findings, a concurrent heat wave and blackout event would require a far more extensive network of emergency cooling centers than is presently established in each city, with mandated backup power generation,” the authors wrote.

The New York Times asked officials in Atlanta, Detroit and Phoenix to comment on the paper’s findings, and to describe their plans for responding to a combined blackout and heat wave.

A spokeswoman for the city of Phoenix, Tamra Ingersoll, said that in a crisis situation like a heat wave overlapping with an extended power failure, many residents would leave the city on their own. Emergency response for those who remained would focus on “vulnerable populations such as the elderly, infirm or low-income individuals,” she said.

The office of the Atlanta mayor, Keisha Lance Bottoms, did not comment.

The Federal Emergency Management Agency, in response to questions about whether it had plans for helping a large city deal with a combined blackout and heat wave, pointed to a 2017 plan for managing the effects of a long-term power failure.

But that document did not address how the agency would respond if a heat wave struck during such a blackout, beyond noting that “lack of power will create challenges to providing consistent heat or air conditioning and sufficient sanitation/hygiene in shelter or other mass care facilities.”

Other cities across the United States are at risk of facing similar health threats from a combined heat wave and blackout, in terms of the share of their population that could very likely be in danger, the authors found.

“We find that millions are at risk,” Dr. Stone said. “Not years in the future, but this summer.”