More than half of suspects in 163 domestic abuse murders during lockdown were known to police already with many using Covid as excuse for behaviour, report reveals

More than half of domestic murder suspects were already known to the police for offending, a bombshell report has revealed.

Officers were aware of attackers in 58 per cent of 163 cases and 48 per cent had previously been reported for abuse, according to The Domestic Homicide Project.

Police warn authorities must be prepared for an increased risk of domestic homicides as some abusers’ control is taken away amid eased Covid restrictions.

Some 163 domestic homicides and 38 suspected suicides of victims of domestic abuse were reported by police in the year to March 31, the research says.

Figures show rates of domestic homicides are ‘entrenched and enduring’ but did not rise much during the first year of the crisis.

But the National Police Chiefs’ Council (NPCC) and College of Policing say the rates are unacceptable.

They warn of an increased risk of deaths as some abusers regain access to their victims as society reopens. 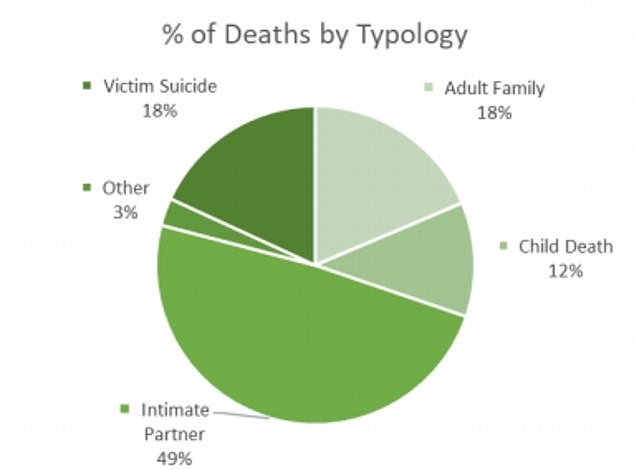 Officers were aware of attackers in 58 per cent of 163 cases and 48 per cent had previously been reported for abuse, according to The Domestic Homicide Project figures (pictured)

Their report also warns financial pressures arising from Covid-19, its mental health legacy and delays to court cases are also likely to continue to be reflected in domestic abuse, domestic homicide and victim suicide.

And they said forces must remain alert to ‘Covid-blaming’, with some suspects having used the pandemic as an excuse or defence for their behaviour and others having ‘weaponised’ it as a tool of control.

But they also believe emerging from lockdown could help reduce the risk in some cases by opening up access to support networks and making abuse more visible.

All police forces in England and Wales responded to requests for information on domestic homicides – including murder from a current or ex-partner, family member and child deaths in a domestic setting, and suspected suicides of victims. 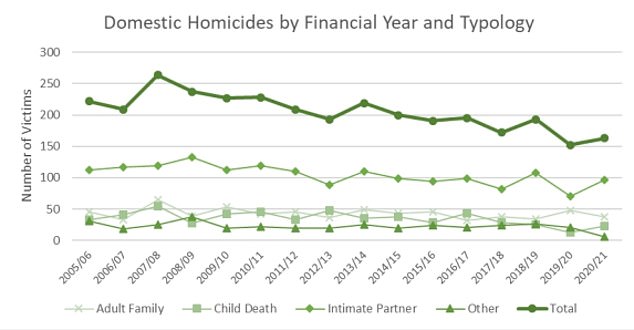 Their report also warns financial pressures arising from Covid-19, its mental health legacy and delays to court cases are also likely to continue to be reflected in domestic abuse, domestic homicide and victim suicide

It is the first time data on apparent suicides of victims with a known history of domestic abuse has been captured.

Dr Lis Bates, who led the Home Office-funded research, said there has been a slight increase in the number of domestic homicides of an adult family member by another relative since April.

The senior research fellow at the Open University, told a media briefing an ‘informed guess’ is that it is perhaps linked to ‘families being able to get together again who haven’t been living together during Covid’.

NPCC lead for domestic abuse, Assistant Commissioner Louisa Rolfe, said: ‘We do know from other research that some of the protective measures around Covid-19 like lockdown meant that estranged partners had less opportunity to abuse victims in a sort of face to face way.

‘But we have seen increases in things like online digital-perpetrated abuse, but of course… many forces have been thinking about those abusers that they are aware of and… what they might do as lockdown measures ease, and there’s been a lot of contact with victims as well.’

Ms Rolfe said the research had identified a ‘greater than previously connected’ link to a history of domestic abuse.

Their findings also support existing research that coercive and controlling behaviour is associated with higher risk of homicide.

Almost three-quarters (73 per cent) of the victims were female, 76 per cent of those with a known ethnicity were white and 90 per cent of deaths occurred in urban areas. 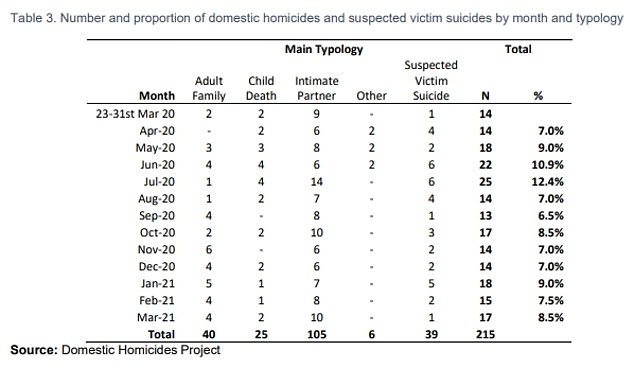 Pictured: The number and proportion of domestic homicides and suspected victim suicides by month and typography

Dr Bates said numbers ‘remain far too high’, with 14 victims dying at the hands of a partner or relative each month, and three apparent suicides of victims a month.

She said: ‘Services remain hugely stretched and have been herculean in their efforts to support victims throughout the pandemic, often on a shoestring.

‘What emergency funding was available has now largely ceased, but demand remains as high as ever.

‘The report clearly highlights the increase in demand for support spikes after lockdown measures ease, as victims find opportunities to seek help – but it is at exactly this point that victims can be at highest risk.’