Home » TV & Movies » What happens when TV shows outrun the book they are based on?

Television is a hungry beast and its appetite for content has never been more voracious. There’s a  constant craving for shiny new shows and inspiration can come from a range of sources: original ideas, books, plays, comics, graphic novels, podcasts, sketches. But the standouts that generate global excitement and attain the coveted trifecta of critical acclaim, commercial success and awards glory are rare. And when those productions come along, there’s one resounding response: more please!

Then comes the dilemma: is it better to exit on a high and leave the audience wanting more, or to try to build on the success and further milk a winner? An added complication comes when the hit show is based on a book and all, or much, of its plot has been used for that initial, triumphant outing. 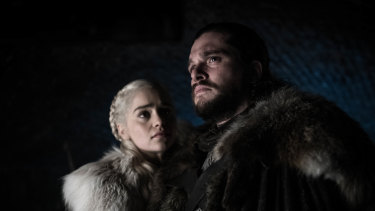 Daenerys Targaryen and Jon Snow in the final season of Game of Thrones.Credit:Helen Sloan/HBO

To some extent, that’s the dilemma that has confronted the creators of a trio of internationally successful productions based on books. Game of Thrones, The Handmaid’s Tale and Big Little Lies all came to TV with the blessings of, and some level of participation from, their authors.

Over eight seasons, Game of Thrones overtook George R.R. Martin’s as-yet-unfinished A Song Of Ice And Fire series. Before it wrapped on screen, Martin indicated that his book series would end differently to the screen version. The hotly anticipated TV finale met with a mixed response. There were accusations that characters behaved in ways that were not consistent with what was known about them and disappointment at plot lines left unresolved.

With Handmaid and Lies, stand-alone novels were the basis for the premiere seasons. But with their success came cries for more and the producers of both dramas obliged, although one has accomplished its task more effectively than the other.

Based on Margaret Atwood’s dystopian vision, The Handmaid’s Tale recently launched its third season (Thursdays, SBS, 8.30pm and On Demand). Following the trials of Offred/June (Elisabeth Moss) in the brutal fundamentalist nation of Gilead, it ended its opening season with the ominous arrival of a black van at the house of Commander Fred (Joseph Fiennes) and his wife Serena (Yvonne Strahovski), leaving a question mark hanging over Offred’s future, as the novel did. 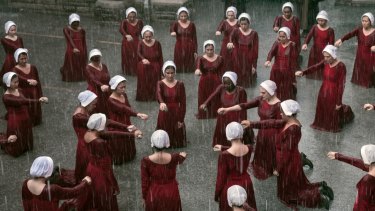 A scene from The Handmaid’s Tale.Credit:AP

While Atwood has noted that she had little control over the adaptation of her novel, she added, after the first season had screened, “I would have to be awfully stupid to resent it because things could have been so much worse. They’ve done a tippety-top job … the acting is great, they’ve stuck to the central set of premises.”

The second season expanded on the horrors of Gilead, moving out into the blighted colonies and spreading the suffering endured by Offred to that afflicting a number of handmaids and wives. In the season finale, Offred has the opportunity to escape the oppression of Gilead, but chooses instead to save her baby daughter and return to the wretched nation as some sort of caped avenger.

It’s a decision that seems bizarre in terms of story logic and character, but is understandable in terms of pragmatics: no Offred in Gilead, no Handmaid’s Tale. Offred, restored as June and conducting a guerrilla campaign from the safety of Canada wouldn’t cut it.

But, as a perhaps foreseeable consequence, the newly arrived season three appears to lack a sense of direction, spending an inordinate amount of time on close-ups of its heroine’s alternately inscrutable, furious or resolute face.

The producers of Big Little Lies (Mondays, Fox Showcase, 11am) also chose to return to the scene of the crime, in their case an upper-middle-class California coastal community relocated from Liane Moriarty’s novel. Once again the focus is on a handful of mothers, now known as the “Monterey Five”, who are united by a secret they share about a death during a function at Otter Bay Elementary school. At the same time, they’re also divided by class, money and family circumstances, and each has her own problems.

When the widespread acclaim for the first season created a demand for a follow-up, Moriarty, who’s never written a sequel to any of her novels, was initially happy for the production to move on with out her. “I thought I was done,” she said. “I didn’t want to be involved. But then I would keep saying, ‘But if you do it, you could do this’, so I did keep thinking of little ideas and then the more I thought about it, the more interested I got.” She ended up writing a 200-page novella which became the foundation for the new season.

As with the first season, the teleplay is by award-winning writer-producer David E. Kelley (Boston Legal, Ally McBeal), who knows a thing or two about fleshing out characters, plotting and pacing. Actor-producers Reese Witherspoon and Nicole Kidman also pulled off a coup by fulfilling Moriarty’s wish and nabbing Meryl Streep to play the spiky, grieving mother of deceased abusive husband Perry (Alexander Skarsgard). 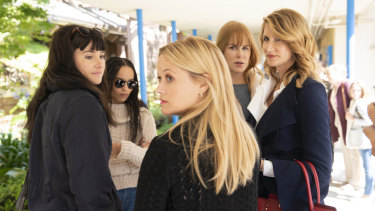 What better imprimatur than bringing on board a woman regarded as the world’s greatest living actress. Surely she wouldn’t sign on for a lemon.

While Handmaid’s Tale seems to be searching for direction, the early episodes of Big Little Lies suggest a masterful extension as the key characters are given meaty storylines to work with. The magnificent Streep as Mary Louise, keenly and slyly prodding for information, is an inspired addition.

These highly hyped productions illustrate both sides of the dilemma that producers face in moving beyond the source material to capitalise on the success of a drama series: whether to leave well enough alone or to press on and risk tarnishing the legacy of what once seemed an unqualified triumph.

And there are no hard-and-fast rules: it depends on who’s doing it and how well it’s done. Six terrific seasons of Justified, following the adventures of deputy US marshal Raylan Givens (Timothy Olyphant), grew from a short story by Elmore Leonard. The adventures of Sherlock Holmes have extended well beyond those originally penned by Sir Arthur Conan Doyle and been zapped up to win a new generation of fans. The Man In The High Castle successfully departed from Philip K. Dick’s source book for its follow-up seasons. The eerie vision of a troubled future following a cataclysmic event in The Leftovers used up Tom Perrotta’s story in its first season. Executive producer Damon Lindelof saw further seasons as an opportunity to expand the world of the book and the series justifiably built a devoted following. On the other hand, when the second season of 13 Reasons Why moved beyond Jay Asher’s young-adult novel, the reaction was less enthusiastic.

There are many more examples and the results are a mixed bag. But, on the basis of the early episodes of their new seasons, it looks like Handmaid’s Tale should’ve quit while it was ahead, while Big Little Lies has enough juice to run until the Monterey Five are grandmothers.