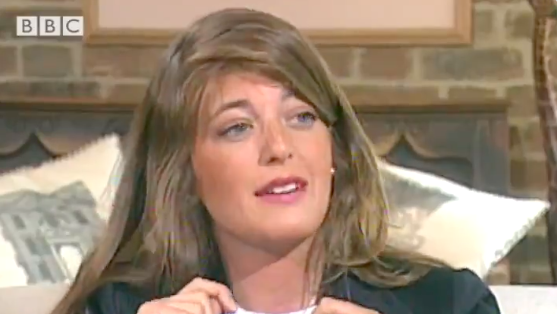 We know the word ‘unrecognisable’ is thrown around a lot, but Claudia Winkleman without her signature fringe may as well be a different person.

The Strictly Come Dancing star appeared on Good Morning on the BBC back in 1996 without her usual black heavy fringe, fake tan and eyeliner, and we are rather shook.

In the clip from 25 years ago shared by BBC Archive, Claudia was billed as a chat-up connoisseur during a segment about ‘improving your pulling power’, and sported long brown hair with a wispy side fringe.

While she discussed how women like to be chased and why a woman asking a man for a light means she wants to talk, a then 24-year-old Claudia shunned her preferred 2021 make-up for mascara and lip gloss.

However, soon after this appearance, Claudia adopted her heavy fringe, which has remained her signature look for 20 years.

The 49-year-old explained that she never turned back after getting the chop, telling Good Housekeeping: ‘It started out quite wispy and floaty, but I immediately got my hairdresser to change it for a strong, Lego-like style. Once I saw that I fell in love and haven’t been without it since.

After six years presenting Strictly’s It Takes Two, she graduated to co-hosting with Tess Daly in 2012 after Bruce Forsyth stepped down.

As well as that, she is the host of Britain’s Best Home Cook, and last year, Claudia took over the Saturday mid-morning slot on BBC Radio 2 from Graham Norton.

And that can’t have had anything to do with her fringe, being radio and all, so we reckon Claudia should give herself more credit.