UNDER THE SILVER LAKE ★★

Andrew Garfield, playing a tousled slacker from the east side of Los Angeles, walks into a glitzy rooftop club, to be greeted by two pretty women wearing top hat, tails and bikini. 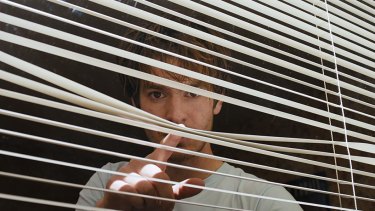 Andrew Garfield does an heroic job trying to haul us through this muddled Los Angeles detective story.

"Welcome to Purgatory," they coo, handing him a drink. "Good to be here," he says. Except it isn’t, not really, neither for him nor the viewer.

He’s out of place, out of sorts, out of money, out of his head in love with a girl who has disappeared and largely out of credit as a lead character.

Shiftless and aimless can be captivating, as fans of The Big Lebowski know. That dude abides; this one doesn’t, although Garfield does an heroic job trying to haul us through 139 minutes of David Robert Mitchell’s muddled and befuddled inversion of a Los Angeles detective story with pop culture trimmings.

Sam (Garfield) lives in one of those cheap motel blocks around a pool in which Hollywood writers in movies always reside. This one has a topless senior who tends her parrots on a balcony opposite, and a gorgeous bottle-blonde in white bikini and sun hat, with matching lapdog.

Sarah (Riley Keough, granddaughter of Elvis) gives Sam a night’s frisky attention but she is gone the next day, her apartment vacated in the night. Sam sets out find her, ignoring his landlord’s threats of eviction.

He stumbles through the highs and lows of Movie Town, convinced there are secret codes everywhere that will lead him to her, if only he can break them.

OK, Sam is delusional, bordering on schizophrenia. That would work if, at some point, the director owned up to the diagnosis, but he never does. Sam’s mental state is the movie’s norm: everyone else seems off the charts by comparison.

The film offers a stream of ideas, rather than shaped arguments. Sam befriends a weird guy who draws an obscure fanzine full of horror tales centred on Silver Lake, near East LA. This area once housed silent film studios, and Mitchell sees movie ghosts everywhere. 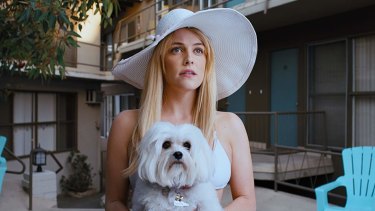 The disappearance of Sam’s neighbour Sarah (Riley Keough) sparks his trip through LA.

He is giving us his own psychic version of LA, as a Detroit native who moved here a decade ago. Sam wakes up one morning on the grave of Janet Gaynor, the silent actress his mother idolises. "Mom" calls Sam once a week, but there’s every chance she’s already dead. That would explain some of Sam’s delirium but again, Mitchell never bothers to resolve.

There is humour, amongst all the allusion. It’s like spending two hours and 19 minutes inside the fevered brain of an obsessive fanboy, who wants to get all his references in a line, like ducks, musical as well as cinematic.

Mitchell has a gift for arresting and slightly discomfiting imagery – as when Sam chases a coyote through the back lanes at night, convinced that coyotes know some of the secrets – but he either can’t, or won’t, submit to the editing discipline that would give the film pace and drive.

Instead, we get meandering and doodling, as Mitchell tries to elucidate a theme about pop culture being both inspiration and dead-end.

I guess he proves that part, with the film’s concentration on quotation – Hitchcock, David Lynch, Curtis Hanson, Bernard Herrmann and a hundred others – rather than narrative. If you’re going to subvert the detective genre, you first need to master it. No one really cares how many movies you’ve seen.

Part of the reason Mitchell fails is his attitude to women – best described as more physical than spiritual. None of the female characters, and about 20 of them who waft in and out, is anything but a sexual target for Sam.

If Mitchell was trying to satirise the idea of male voyeurism, the kind that drove Hitchcock’s Rear Window, he does it in a strange way, by having several of these women show their breasts.

It’s typical of his self-indulgent confusion. The film had the makings of an intriguing psycho-thriller, but Mitchell can’t bear to leave anything out – and that is the difference between art and imitation.