The banner is real, but Carlson wasn’t talking about himself 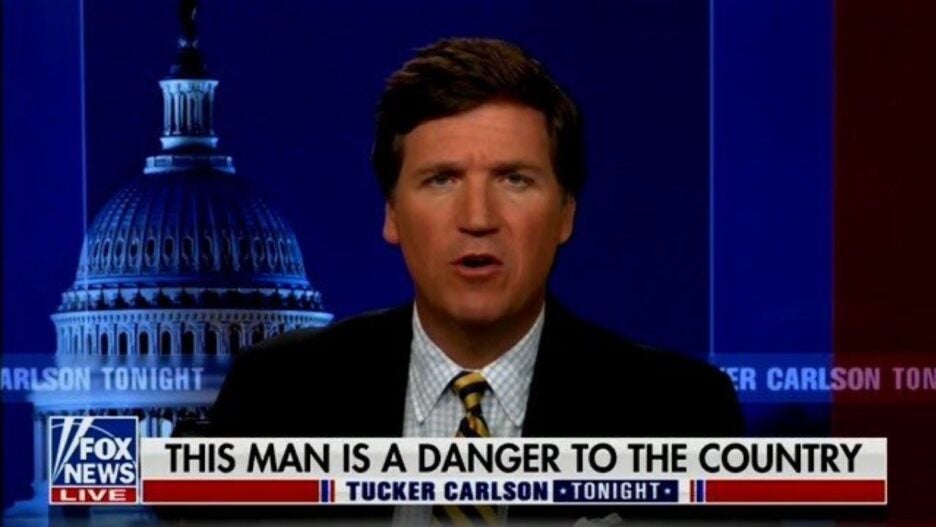 Fox News’ Tucker Carlson was talking about Gen. Mark Milley Thursday night when a chyron appeared under him declaring, “This man is a danger to the country.”

Screenshots of the on-air graphic quickly spread online, circulated by those who didn’t feel the need to re-caption what was already captioned. Others just wrote, “accurate,” or joked that Fox News’ competitors couldn’t have branded him better than his own show inadvertently did.

Carlson was discussing Milley, the chairman of the Joint Chiefs of Staff, and new reporting from Bob Woodward and Robert Costas that he personally moved to stop former president Donald Trump from being able to order military or nuclear action in the wake of the Jan. 6 riot at the U.S. Capitol.

Carlson does draw millions of viewers each night, breaking ratings records with his primetime program on Fox News. Amid the ongoing coronavirus crisis, he’s drawn criticism for his stance that vaccine skepticism is fine. His views on immigrants, refugees and the Jan. 6 Capitol riot have also drawn significant ire, especially considering they reach so many millions of viewers each night.

Some on Twitter joked that he and his show were finally telling the “truth” with the banner.