Few kindnesses can brighten a critic’s day like an unexpectedly brief episode of TV. Whether it’s a tight 45-minute entry popping up amid an established hourlong series or a new comedy-drama hybrid choosing the more fuel efficient route, those shaved minutes mean so much more to those of us tasked with watching entirely too much television.

But any relieved sighs are about more than just viewing fatigue. Shorter entries can signify resourcefulness — they stand out for giving the story exactly as much time as it needs, rather than doubling back to make up for past oversights, extending scenes to underline story points, or simply running long because they can. Sure, sometimes brevity is a bad thing — there is such a thing as too short — but the list of programs blighted by bloat is far longer than those failing from fugacity.

When it comes to excessive episode lengths, two primary culprits stand-out: streamers and film directors. The former tends to see its distribution model as revolutionary (meaning it’s both uninterested in accepted storytelling practices and eager to keep subscribers hooked as long as possible), while the latter, well, they’re more interested in making a long film than a good TV show. So imagine my delight, when six hours into Oscar-winner Barry Jenkins’ 10-hour epic, “The Underground Railroad,” that the seventh episode, “Fanny Briggs,” told its full, mesmerizing tale in 17 minutes flat.

Appearing as if from nowhere, the previous two episodes totaled two hours exactly. The first three all ran beyond the 60-minute standard. And yet here was “Chapter 7: Fanny Briggs,” bringing the heat in less than one-third its allotted time.

“So much about what we do now — how we release these shows, how we frame them, how we structure them — are dictated by the commerce of television in its original format,” Barry Jenkins said in a recent discussion with IndieWire’s Libby Hill. “You had these hourlong blocks, and you released an episode a week so I could sell you diapers in week one and I could sell you a stroller in week two and pacifiers in week three. […] Part of the freedom of having things on a streamer, or even the networks now are doing episodes of varying lengths, is that now the story itself can dictate how long it wants or needs to be.”

Similar statements have been made, typically justifying longer episodes, but it’s those last few words that separate Jenkins’ TV debut from many of his filmic peers. (That, and spending a little time in TV writers’ rooms.) When Jenkins said the story dictates how long it should be, he isn’t just talking about the entire arc of the series; he’s talking about the arc of each episode — this episode, “Chapter 7,” directed by Jenkins and written by Jihan Crowther, which returns to a town consumed by hate and the little girl who slips out in a cloud of smoke.

The titular Fanny Briggs (played by Mychal-Bella Bowman) is first introduced in Episode 3, “Chapter 3: North Carolina,” only then she’s not called Fanny — she goes by Grace, the name given to her by Mr. Martin (Damon Herriman), the local station agent for the Underground Railroad. He’s been hiding Grace in his attic for many months when Cora (Thuso Mbedu) arrives, and he tells the new stowaway, “Remember: Grace will guide you.” And she does. Grace helps Cora avoid the loud floorboards that may give away their position, and she shows her the fiercely bigoted townsfolk all-too-eager to attack outside.

While trapped in the attic, Cora dreams of her mother, holding her as a baby, before waking up to Grace trying to comfort her in the present — a theme prevalent to “The Underground Railroad” as a whole, as well as Grace’s part in it.

“So much of this [show’s] journey was about mothers and mothering, and about Cora’s very fractured relationship with her mother,” Jenkins said. “And so we very early on decided we’d create this character, Grace, so that when Cora is in the attic in North Carolina, through her experience with Grace, she could get an even better understanding of what [her mother] Mabel had to go through.” 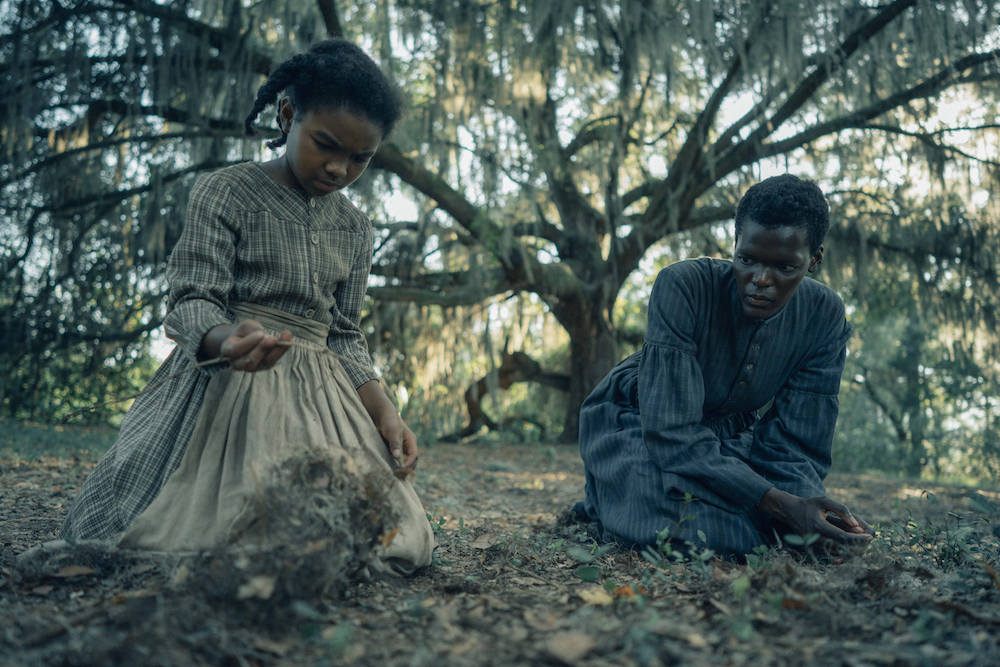 Cora believes her mother abandoned her, which only intensifies her resolve to protect Grace and keep her close. “I’m going to get us out of here,” Cora promises, but Grace replies, “Where is there for us to go?” The answer seems to come at the end of “Chapter 3,” when Ridgeway (Joel Edgerton) finds Cora and takes her with him. In a fit of rage, a neighbor named Fiona (Lucy Faust) throws a gas lamp into Martin’s house and, as Cora is dragged away screaming, it’s presumed Grace died in the ensuing fire.

“[Since] the character can’t go on with Cora, I knew she would be left behind in the attic — but I didn’t want that on my consciousness, so I knew we had to go back and detail what happens to Fanny Briggs,” Jenkins said. “That’s how the ‘Fanny Briggs’ episode came to be.”

Such compassion for the character speaks to how Jenkins treats his story, both in the big picture (Robert Daniels’ called the limited series a “re-humanization” of degrading slave narratives) and in its individual components. “Chapter 7” not only reframes what happened to Fanny Briggs; it reframes the ending of “North Carolina.” Rather than leave it as a place where cruelty conquers all, Jenkins and Crowther show how the citizens’ savagery leads to their downfall. The fire they started soon spreads beyond Martin’s home and through the entire village. Even as local leaders call for water to help extinguish the blaze, some men instead grab Fiona, toss her to the ground, and beat her. Their anger trumps common sense; instead of stopping the fire before it rages out of control, their rage finds an outlet in the closest target.

Hate is a fanatical force, but love can persevere. With the people outside distracted by the fire they started, Grace calmly walks down the stairs, out of the house, and escapes. She ducks out the back door, and as the camera rises high above the town, Grace is but a shrinking blip among the smoky wreckage spreading across the poisoned land. (It’s the only shot in the series that uses a drone, which you can hear cinematographer James Laxton discuss further here.) From there, Grace wanders through the darkness, first through the woods, then in a dim tunnel, and finally over a pile of rocks, where a train is waiting to whisk her away.

It’s there — sitting aboard the train, speaking to the conductor, Mae (Denitra Isler) — that we learn Grace’s real name. Before the engine can start, Grace has to share her “testimony,” and in doing so, she says Mr. Martin called her Grace, but her mama named her Fanny Briggs — a name first heard in Colson Whitehead’s 1999 novel, “The Intuitionist.” (Jenkins has long been a fan of the novel, and actively looked for places to hide “easter eggs” within “The Underground Railroad.”) In “The Intuitionist,” Fanny Briggs is a prominent Black historical figure. An important government facility, the Fanny Briggs Memorial Building, has been named after her, and she’s remembered as a slave who taught herself to read.

It’s fitting then that “The Underground Railroad’s” Fanny Briggs ends her story by recording testimony in the conductor’s log. She had found another, similar book on the way to the train — “the one with all our stories in it” — and apologized for leaving it behind. “Don’t worry about it,” Mae says. “The book is just ink and paper. Our story is always going to be right here,” and she touches her heart. Still, Fanny sits down and starts writing away. The train chugs forward. Smoke billows from the engine. But the light from the engine never goes out. 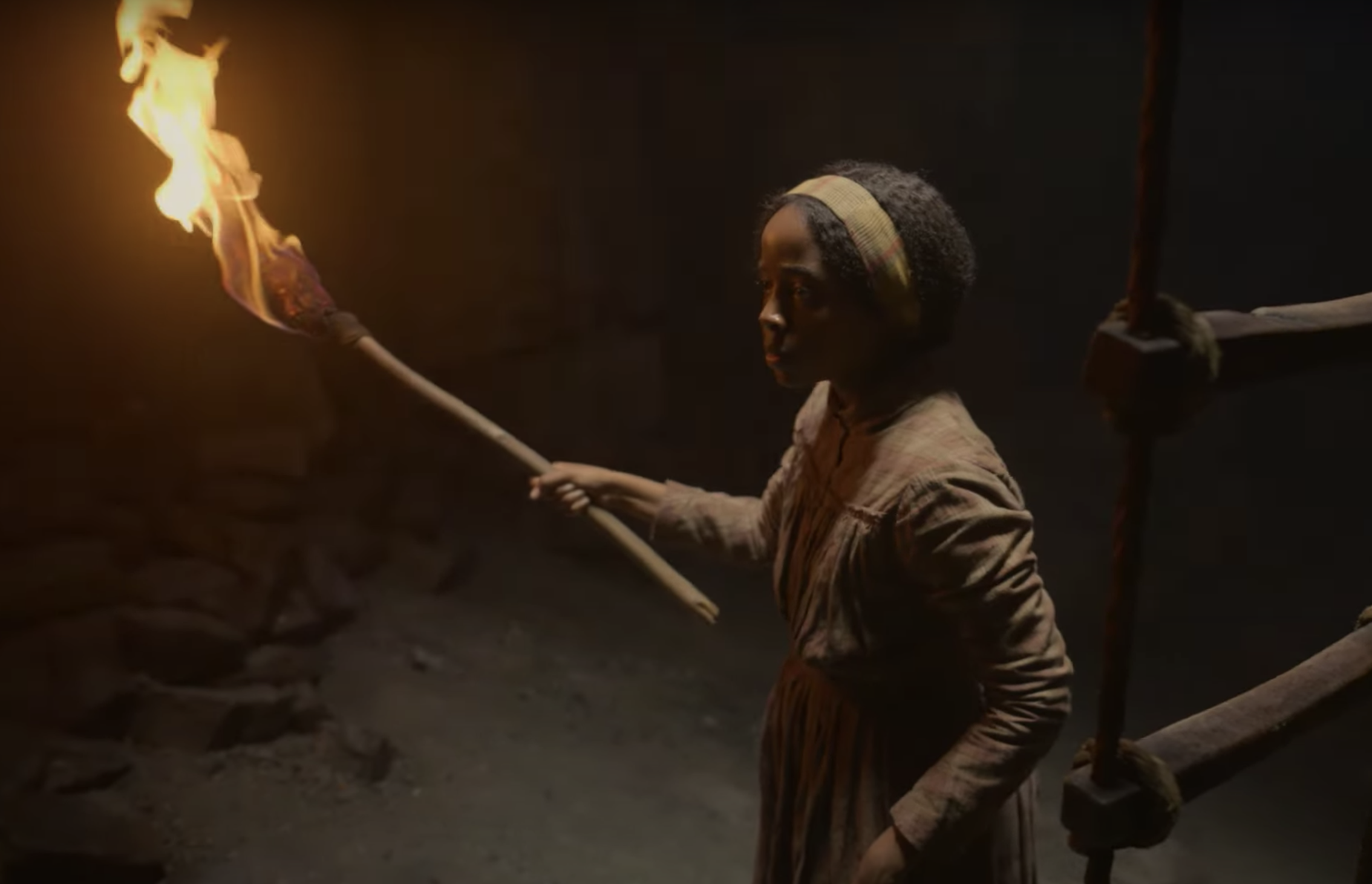 “‘Fanny Briggs’ is communicating a very simple idea, and it’s also operating on very different rules and principles from the rest of the show,” Jenkins said. “Because of that, I don’t think the audience needs to be subjected to an hour of thinking and digesting imagery in a much different way than they’ve become accustomed to.”

And they aren’t. As the train chugs ahead, the credits roll and Michael Jackson’s “I Wanna Be Where You Are” pops over the speakers. What happens next is anyone’s guess. Fanny says she wants to go find Cora, and even though the little girl doesn’t show up in the final three episodes, there’s no reason to believe the two can’t reconnect later on. Where there once was fire, there’s only light. Where there once was hate, there’s love. And where there once was tragedy, there’s hope.

“Fanny Briggs” is a very short episode of television. “Fanny Briggs” is also an excellent episode of television. It’s excellent because it’s short, yes, but it’s not only excellent because it’s short. “Chapter 7” exemplifies what episodic TV should strive for: It tells a story that resonates in conjunction with the series around it while still having plenty to say on its own. “Fanny Briggs” helps drive home key themes of re-humanization, mothering, white anger, and more, but it also breaks from the series’ protagonist, follows a childlike dream logic, and imbues its eponymous lead with agency and attitude.

It is, as they say, a rich text, and among this year’s other contenders for Outstanding Limited Series, it helps “The Underground Railroad” stand out. While others merely revel in the small screen’s aesthetics without harnessing its storytelling power, Jenkins’ TV debut forges its own ambitious design while utilizing episodic TV’s distinct attributes. Streaming offers flexibility to creators, but those disintegrating borders don’t have to only mean “more.” Here is a limited series to point to and say, “This could only work as a TV show” and “I’ve never seen anything like it.” Recognizing those rare ideals is important, and Emmy voters have a chance to do just that.

If I could, I’d give “Fanny Briggs” an Honorary Emmy for its Contributions to Television. But since that award doesn’t exist (nor is it mine to give), please consider “The Underground Railroad” in all other categories. Less is not more at the Emmys, even if it can be on television.

“The Underground Railroad” is available to stream via Amazon Prime Video.