The 1917 Halifax Explosion — the world’s largest accidental, non-nuclear explosion — killed 1,782 people and injured an estimated 9,000 others, devastating the Richmond district of Nova Scotia’s capital in the process. Upon hearing the extraordinary account of a sailor who survived the disaster, flying 2 kilometers through the air before landing uphill naked and unharmed, the Oscar-nominated and Palme d’Or-winning duo Wendy Tilby and Amanda Forbis asked themselves, “What was the trip like?”

Blending 2D and 3D animation with live-action stock footage, “The Flying Sailor” telescopes time, expanding the few seconds the titular sailor spends tumbling across the sky into a seven-minute examination of the meaning of existence.

“Just the thought of being that guy in the sky is mind-blowing all on its own, so we loved it and then we put it away for a really, really long time,” Forbis told IndieWire, explaining how they were initially intrigued by the structure of the narrative. “You have this nice envelope of ‘He gets launched, and then he lands,’ and everything in between is completely open season.

“When we started out, we knew we really wanted to make the film,” she said. “But then we would say to each other, ‘Okay, what is it about, exactly?’ And we would shrug and say, ‘Oh, it’s about life.’ And that just sounds so pretentious.”

“But it’s true,” Tilby interjected. “It’s about life, and that’s become clearer to us as we’ve gone through it. It relates so strongly to ‘When the Day Breaks’ and, to a lesser extent, our other film, ‘Wild Life,’” she said, referencing the duo’s first two short films, both of which garnered Academy nods in 1999 and 2011. “It’s obviously carrying through these preoccupations. That’s the thread that runs through them, that this is life.”

“That was the starting point,” said Forbis. “We wanted to take that one section of ‘When the Day Breaks’ and make that the meat of this film.” 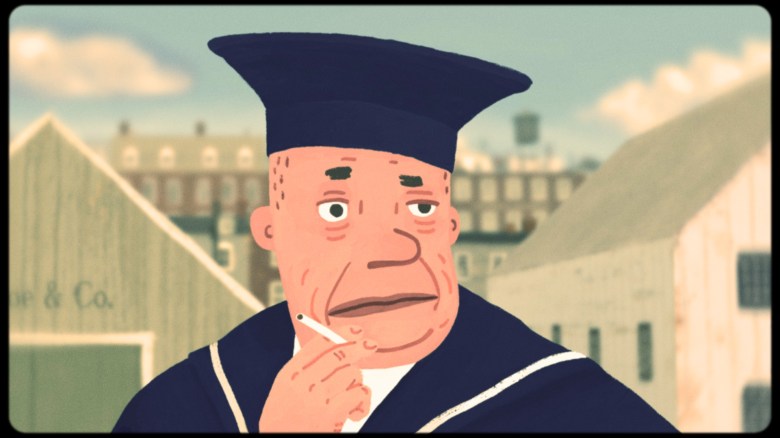 Courtesy of the NFB

“The Flying Sailor” opens on a painterly 2D sequence of a fish swimming in the sea, then dissolves to a jaunty scene of a bustling harbor rendered in 2D and 3D animation overpainted in a classic cartoon style. Two ships are on a collision course, one of them piled alarmingly high with crates marked “TNT,” while a sailor strolls along the dock.

The moment is tautly drawn out: the ships collide and the sailor stops to watch, lighting a cigarette. A fire breaks out. A match is dropped, and then extinguished. A blast rips through the air, building from a deafening roar into pure noise ringing in our ears. Images of the explosion fill the screen before suddenly cutting to black. Nearly two minutes in, a title card fades gently in and out of sight. The sailor is flying, and we fly with him through flashes of memory and into a cosmic soup that boomerangs back to earth with a thud. In a final flourish, the still-lit cigarette remains perched in the sailor’s mouth.

“We thought of it as a mid-air bit of ballet,” said Forbis. She and Tilby wanted to take the flailing movements of the panicked sailor and make them “quite beautiful in a way. Not that we wanted to make light of the situation, but we wanted it to be beautiful and poignant and even funny at the same time.”

The short film, produced by David Christensen at the National Film Board of Canada and backed by a score written by Luigi Allemano, marks Tilby and Forbis’ first foray into 3D animation. “We were brand new at 3D and had no idea, really, what we were getting into,” said Forbis. 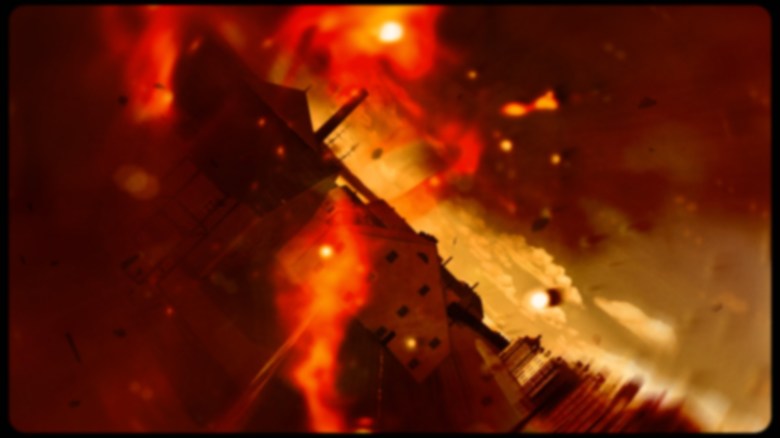 Courtesy of the NFB

Working with a small team of animators, the project took three years to complete, a timeline that would have been impossible had the entire film been animated by hand. The duo collaborated with 3D artist William Dyer to create the city of Halifax and its subsequent destruction. “We painted all the skins of all the buildings to make it feel hand-painted,” Tilby said. “And then he did the explosion of the buildings and everything, which was a monumental job.”

Illustrator, designer, and animator Anna Bron was enlisted to assist with the 2D animation. “She’s a better animator than either of us,” Tilby said, describing how Bron animated sequences of the sailor’s clothing coming off in mid-air as he was propelled by the blast. “She also did some sailor rendering because, as you can imagine, there was quite a bit of that,” Forbis said, “hundreds of those little stinkers.”

“The image of this naked, vulnerable sailor tumbling through the air,” Tilby said, before Forbis finished the thought, “there’s just something romantic about it. He’s so vulnerable. We were just captivated by that image.”

One of the biggest inspirations for the visuals of “The Flying Sailor” was the work of Canadian painter Betty Roodish Goodwin. “She did these wonderfully gorgeous paintings of bodies,” said Forbis. “Whether they were floating or lying on the ground, you always felt like something terrible had happened to them. But they were also so beautiful and they were very much an inspiration for the sailor in the sky, just the posing and the slumping and the rounded backs.”

Flashbacks in the style of archival tinted postcards were created using live-action footage that had initially been employed to help flesh out the animatics. “At the beginning, we were throwing in everything just to create a shape,” said Tilby, explaining how they created a pastiche of drawings and stock footage “to get a sense of the pace and tempo and structure of this arc,” with the intention of going back later to animate everything, but “some of them ended up sticking.”

“The live-action seagull, for instance,” Forbis added, “We looked at that and thought, ‘I don’t want to draw some substandard seagull. This is a perfectly nice seagull.’”