Need to catch up on Supernatural? Check out our recap of last week’s penultimate episode here.

The road so far has come to a devastating end: Supernatural wrapped up its 15-season run on Thursday with a series finale that found Dean dying during a hunt and saying an early goodbye to his brother Sammy, who went on to live a long life.

The episode begins with a leisurely, ordinary morning of breakfast, jogging, making their beds, laundry and cleaning guns for Dean and Sam. (The dog is there, too!) Sam can’t find anything weird over the wire, but Dean’s got something: Pie Fest! It’s his destiny, he says excitedly when they pull up the event. His brother, however, has “sad Sam face,” Dean notes. Sam admits that he’s thinking about Cas and Jack, and wishing that they could be there with them.

“I think about them, too,” Dean replies. “That pain’s not going to go away, right. But if we don’t keep living, then all that sacrifice is going to be for nothing. So quit being a freakin’ Eeyore.” With that, Dean starts digging into his big box of pies, and Sam shoves one of the pieces in Dean’s face, which makes him feel better. 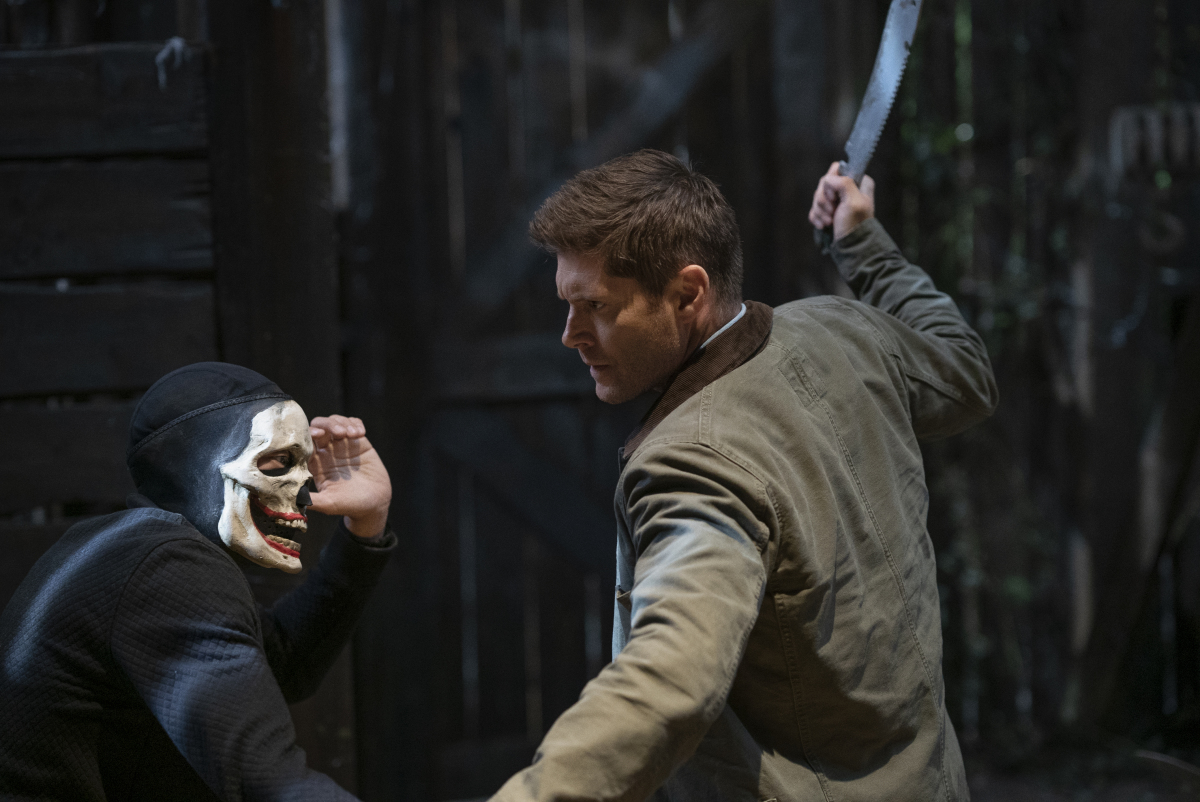 Soon after, Dean and Sam finally find a case: Men in skull masks have kidnapped a dad, ripped out mom’s tongue and taken their kids. Agents Kripke and Singer (nice!) show up on the scene and immediately recognize the drawing of the suspects from John’s journal. Dean and Sam track down the vamps to their nest and shoot one of them with a bullet soaked in dead man’s blood, after which the guy admits that they kidnap children every couple years for a harvest. After beheading a bunch of the baddies, Dean recognizes their leader as Jenny from an early episode.

They successfully take down Jenny and her group, but during the fight, something pierces Dean’s back, leaving him unable to move from the post he’s up against. “Stay with me, please,” he begs Sam. “You knew it was always going to end like this for me… It’s ok. It’s good. We had one helluva ride, man.”

Sam vows to find another way, but Dean replies, “No bringing me back. You know that always ends bad.” He’s fading pretty quickly, so Dean tells Sam there’s two things he needs him to know: “I’m so proud of you, Sam. You know that? I’ve always looked up to you… You’re stronger than me. You always have been.” Then he confesses that the night he came to Stanford to get Sam, he stood outside his dorm for hours because he didn’t know what Sam would say. He was scared Sam would tell him to get lost, and he didn’t know what he would have done if he didn’t have Sam. ” It was always you and me. It’s always been you and me,” Dean adds.

“Dean, don’t leave me. I can’t do this alone,” a tearful Sam begs him.

And if you’re not destroyed yet, then Dean places his hand on Sam’s chest and says, “I’m not leaving you. I’m going to be with you right here, every day, every day you’re living and you’re fighting, because you always keep fighting… I love you so much. My baby brother.” He then makes Sam promise that it’ll be OK, so Sam lays his hand over Dean’s and says, “It’s ok. You can go now.”

“Goodbye, Sam,” are Dean’s final words as his hand drops and a tear rolls down his cheek

After that, Dean makes it to Heaven, where he is greeted by Bobby, who explains that Jack set some things right up there. Heaven is no longer about just reliving memories. It’s what it should have always been: everyone happy and together. (John and Mary have a place nearby!) “It’s the Heaven you deserve,” Bobby emphases. Dean marvels that Jack did all that, to which Bobby replies that Cas helped. And now that he has all the time in the world, what is Dean going to do with it? Go for a ride in Baby, of course, to the sounds of “Carry On Wayward Son.”

Meanwhile, a grieving Sam gives Dean a hunter’s funeral, before taking on a new case and fighting on, like he promised his brother. Jumping ahead through time, we see that Sam has a son named Dean, then an elderly Sam takes the sheet off the Impala and gets inside, slowly putting his hands on the wheel. Finally, Sam’s son (who has an anti-possession symbol) stands over his father on his death bed and tells him, “Dad, it’s ok. You can go now,” as haunting cover of “Carry On Wayward Son” starts to play and Sam takes his final breath.

Cut to Heaven, where Dean pulls up on a bridge in Baby and gets out. As he stands at the railing, he feels something behind him and smiles. “Hey, Sammy,” he says and turns around to find his little brother. The two happily hug as the camera pans out.

Supernatural fans, what did you think of the series ender? Grade it below, then hit the comments!