New Saturday Night Live cast member James Austin Johnson may be playing President Joe Biden on SNL, but he’s really one of the best Donald Trump impersonators around. Johnson has nailed Trump’s voice so perfectly, it’s hard to distinguish if it’s Trump or Johnson speaking with closed eyes. Johnson recently shared how he crafted Trump over folding clothes with other comedians. Plus the reaction he’s gotten when he delivers Trump during standup. 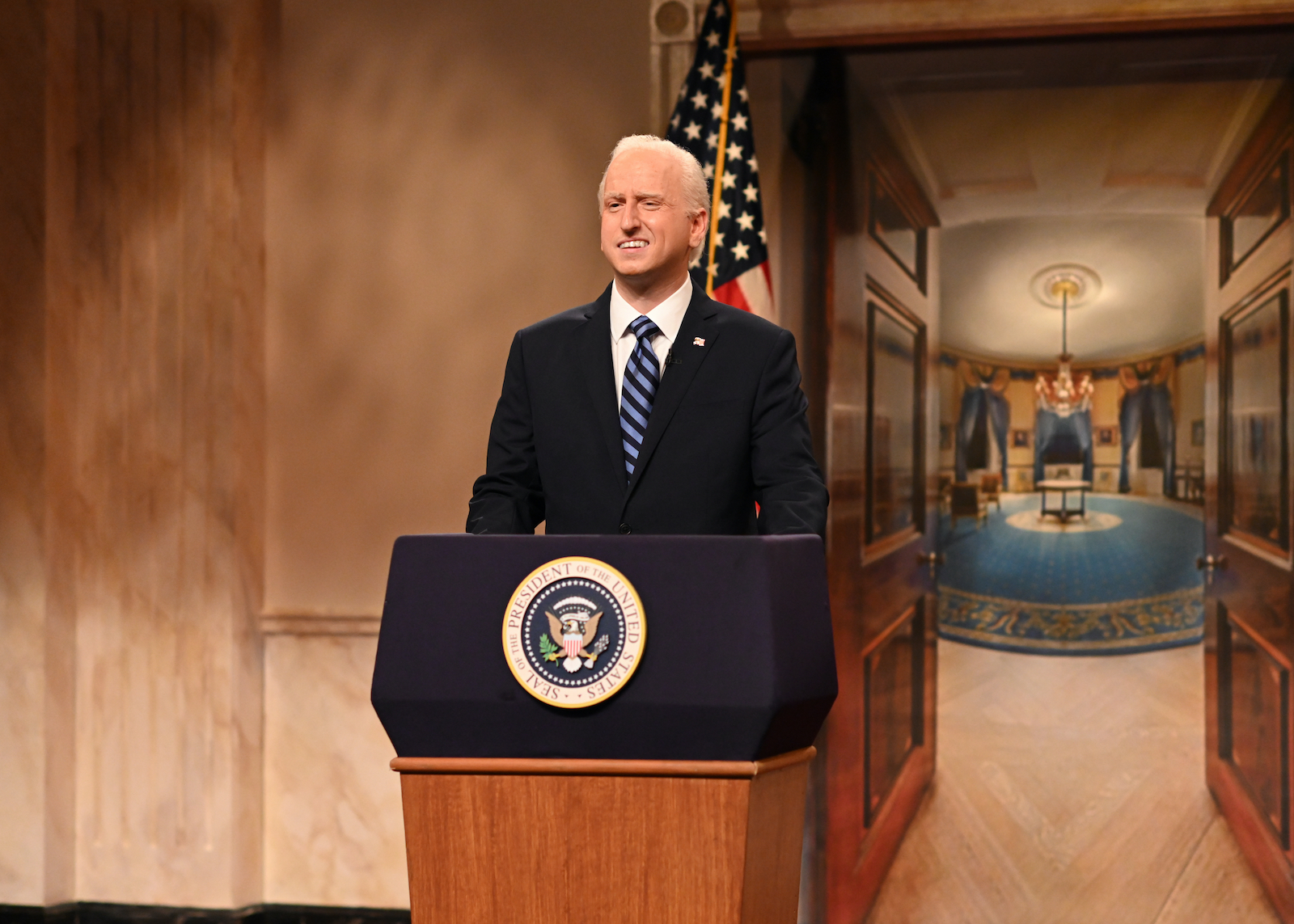 “I had a day job where I was folding clothes with other stand-up comedians and touring musicians, and we were all in this merch warehouse together,” Johnson recalled to Vanity Fair. That’s really where I got a lot of my Trump takes from. It was like being around friends. There’s a social aspect to it, that we’ll just be chitchatting about something, having a conversation at work. That’s where the Scooby-Doo one came from.”

“That was just some lunch break horsing around,” he continued. “I literally ran out to get sandwiches in downtown L.A. and bring them back, and while I was walking back to my truck, I just started doing that video. And that’s probably the best one, circulation-wise.”

Johnson shared how his Trump impersonation left the room in total silence during his standups. The impression was too realistic. “When he first got elected and I was playing with the voice in 2016, 2017, it would show my sort of left-wing anger a lot. I would be like, ‘We’re going to kill everybody. We’re blowing up everybody’s houses I don’t like,’” he said. “I’d be more openly racist and homophobic as Trump.”

“As it developed and got more sounding like him, the bar would go silent,” he added. “Not necessarily laughing, which is very rare for that room. Either it’s talking and laughing, or it’s silent and laughing. But it’s never silent and silent. I noticed that people were listening and not liking what they were hearing when I was repeating what Trump said or heightening it—making it more vicious to people, darker.”

Johnson also shared that he never prewrites any of his Trump material. He said he finds greater success with spontaneity with the character. “I think I might have written out a couple of things a couple of times, and I just noticed that those wouldn’t take off online and it was missing some mojo of what makes Trump Trump,” he said.

Johnson isn’t a fan of the rehearsed, staid impressions. “And those are the Trump impressions that I hate,” he remarked. “When I go online and I watch other people’s Trump impressions, they’re so written out, with these written-out jokes. It just doesn’t sound like Trump.”

He views his impression of Trump as the man himself – totally rogue. “Trump is not written out, and he’s not rehearsed,” he shared. “I tend to hover around Rally Trump, and there’s absolutely no rehearsal there. I pick a pop-culture topic, usually something that is an actual opinion I actually hold.”

Johnson shot a “Cameo” from Trump while out walking. “Cameos for your mom,” he captioned the video. “Yes I am still doing cameos of the Big Guy for your mom. It is her birthday. Link in stories.” He also nailed a version of Trump singing “My Funny Valentine.”

And while he is the master of Trump, he’s currently taking on President Joe Biden.