The longest mothertucking season in RuPaul’s Drag Race is finally coming to an end. Despite competing with an unwanted 14th queen — Miss Rona — and inciting triskaidekaphobia, season 13 sashayed out of the purgatory of the Porkchop Loading Dock and served plenty of twists and turns, goops and gags, shady one-liners and sickening lip syncs.

Heading into Friday’s grand finale, we’re down to a gorgina top 4, and ET’s Brice Sander spoke with Gottmik, Kandy Muse, Rosé and Symone to talk all things season 13. If you missed our breakouts with each queen, check them out here:

Kandy Muse Reacts to Being the 'Underdog' of Season 13

Rosé Sounds Off on Thirsty Fans and Denali Showmance

Symone on Getting Love From Lizzo and Hayley Williams

Of course, we also had to put the queens through their paces with some season 13 superlatives. Below, the top 4 vote on the fashion highs and lows of the season, most iconic lip syncs and more, plus reveal whether they’d return to the Werk Room to compete on All Stars. 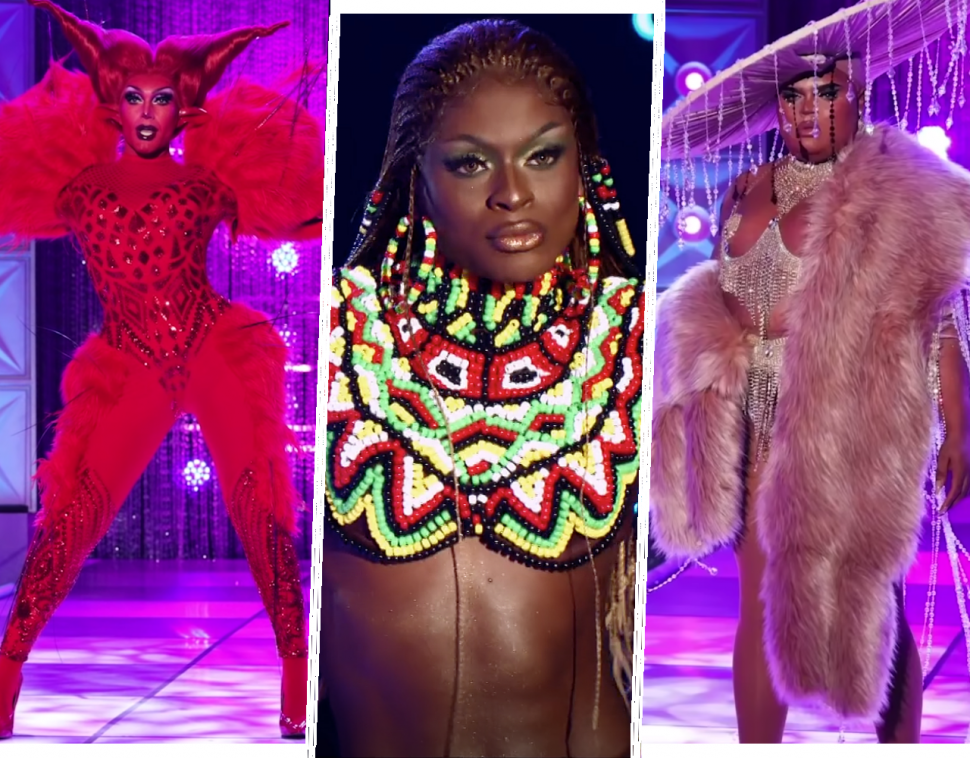 Kandy Muse: Our season had a lot of, lot of amazing looks. I definitely am still obsessed with my beads runway. I don’t think I’ve ever seen a bigger girl go on stage showing body and skin the way I did. So, that is definitely one that I love and appreciate.

Symone: Oh, they’re definitely mine. I have to do three. I always think of my durag, that reminds me of home. I love my fascinator, obviously, and the beast look was real fun. I don’t think people were ready for that one. I don’t even know if I was ready for that one, but I had a great time.

Gottmik: Of mine, I think I have a tie. I love my body bag from The Bag Ball. That’s, like, the most me outfit ever. I love my little black dress and I love my pockets look, too. And then my favorite look overall is Symone’s beads [runway]. I love that. She walked out, and I was like, no, no, no. That’s one of my favorite looks in Drag Race history. 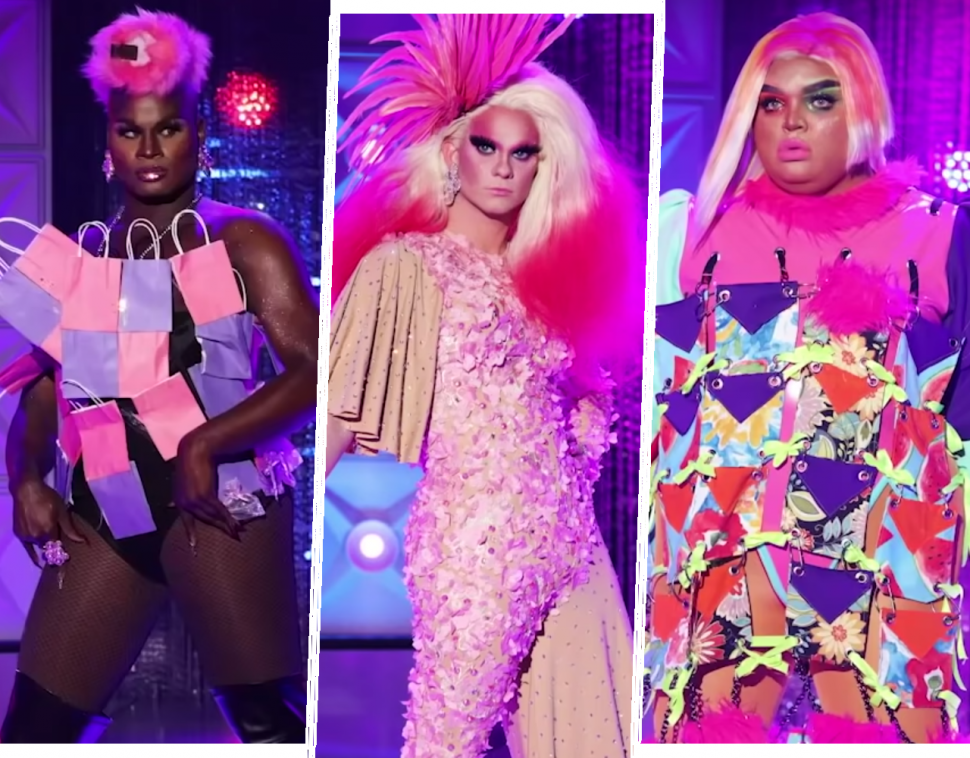 Gottmik: Honestly, I’m not a huge fan of the look Elliott went home in. Her flamingo outfit. I just think a nude illusion should be tight, but I mean, props to her, because she loves flamingos and she’s staying true to herself, staying gorge. Not my thing. I would rather have Lala’s bag outfit, honestly, on my body.

Rosé: You know what? I almost said Lala’s ball look where she made the corset with the bags, but no, f**k Symone’s beads. That was my favorite look. That was amazing. That was so ballsy. I think one of my least favorite looks was Kandy’s pockets.

Kandy Muse: It is very hard for me to answer this one, because I think that in some people’s lists, I might be on that list. Like, we saw in the “Honey, I Shrank the Queens” episode, my pockets look was something to rave over, so I would definitely say that one.

Symone: Of the other girls? Oh, I don’t want to do that. That’s mean, because there’s a lot.

'Drag Race’: Symone Talks Pressure of Being the Fan-Favorite and the Season 13 Finale (Exclusive)

Symone: The quote of the season was, “Is your blood sugar low?“

Rosé: When Gottmik was doing the Norvina mini challenge, “Hello, my little gorgeleantrices.” Gorgaleantrice is a really important word in my vocabulary now. In Rosé’s glossary, that’s right at the top. And it doesn’t even start with “A.”

Gottmik: I love in Untucked when Tina was talking — I don’t know what Tina was even saying — but Kandy goes, “Well, you got a natural comedy face” and Tina’s like, “Right?” She didn’t even process what she said. That was so funny to me. That’s one of my favorite moments ever.

Kandy Muse: I think the quote that stands out to me would definitely be, “If you don’t have star quality, get the f**k out of here.” And now we here, top four.

Rosé: I’d have to say Denali slaying “100% Pure Love.” Just iconic. I mean, the song started charting or something again because of the show. That’s the power.

Kandy Muse: I think that the Lip Sync for Your Life of the season to me in my opinion would have to be between me and Symone. Even though RuPaul said, “Symone, shantay you stay,” RuPaul knew. She was like, “I done f**ked up! I can’t send Kandy home.” Which is why she kept me. So, I definitely think that “Bo$$” lip sync was definitely a really good one.

Gottmik: My favorite lip sync was The Bag Ball with Lala picking up the money. It was so good. I remember being there and being like, I cannot believe I’m witnessing this. This is so funny. I was obsessed with her.

Gottmik: Oh my god, never! I literally could go out there and with Lala’s bag look and I’d be like, hello b**ch! No, I am so proud of everything that I did on the season and I have nothing to apologize or regret or anything. I would not change a thing.

Symone: I don’t regret nothing. I regret not one thing. And I apologize for nothing.

Rosé: Absolutely not. I learned a lot and I had to adapt, but at the end of the day, I got where I wanted to be. And for that I have no regrets, because it all happened when it was supposed to and in the fashion that got me here.

‘RuPaul’s Drag Race’: Rosé on Making It to Finale With No Ru-grets (Exclusive)

Rosé: I mean, it’d be very difficult having won. We’ll see with that one.

Symone: Would I come back? Of course. Now, will they have me? That’s the question.

Gottmik: I definitely would come back for All Stars. I genuinely had so much fun, and RuPaul’s Drag Race was the ultimate bootcamp of life for me. When the end was wrapping up, I was like, “RuPaul, I’m moving in behind the Fabrics.com wall.” Like, I’m not going home. I love it here. So, I can just imagine if I had a whole other season to keep growing and keep going, at the end of that season, it’d be game over.

Kandy Muse: If I didn’t win the crown, I would have to come back, because at some point they’re going to have to put a crown on my head. I refuse to leave the Drag Race franchise without a crown.