Home » TV & Movies » Quantum Leap Boss on Choosing to Do a Continuation Instead of a Full Reboot: 'It Would Be Crazy to Cast a New Sam'

NBC’s new take on Quantum Leap, premiering this Monday at 10/9c, will see Ben Song (played by Kevin Can F**k Himself‘s Raymond Lee) jumping through time and space while helping those in need.

Even though a new crop of characters anchor the story — except for Herbert “Magic” Williams (Ernie Hudson), who appeared in the OG series in the Season 3 episode “The Leap Home, Part 2 (Vietnam)” — the show is a continuation rather than a full reboot. For showrunner Martin Gero, the decision to add to the story instead of redoing everything was a no brainer.

“Everyone felt like the original show was so iconic, it would be crazy to cast a new Sam and a new Al (originally played by the late Dean Stockwell) and just start again,” he tells TVLine. “We would never be able to recapture the magic of those two characters, so to be able to do something totally new but in the same space — creating as a sequel more than a reboot — that just made sense to the entire creative team.”

The show centers around Ben, whose unexplained jump in the Quantum Leap accelerator mirrors that of his predecessor Sam Beckett (played in the original series by Scott Bakula). Sam never made it back home, and now Ben faces a similar dilemma.

“Ben is [Sam’s] spiritual successor,” Raymond Lee, who plays Ben, explains. “He must have seen what Sam Beckett did and the algorithm that he wrote and got really excited about the fact that [Sam] was able to step into the accelerator and make a leap, and [Ben] was probably inspired by that. And at some point, he joined the project to get involved with something of that nature.”

Ben’s unexpected leap leaves the rest of his team scrambling to figure out why he did it and how to bring him home. That crew includes Magic, the project leader; Addison (Caitlin Bassett), an Army vet who appears as a hologram only Ben can see and hear; Ian Wright (Cowboy Bebop’s Mason Alexander Park), who runs the Artificial Intelligence unit “Ziggy”; and Jenn Chou (Bosch’s Nanrisa Lee), who heads up digital security.

According to Lee, the NBC revival’s inclusion of a whole team supporting Ben allows the audience to “understand the inner workings of how these leaps were put together and [what] it takes for these leaps to happen and the kind of politics that are at play that are outside of it,” which is something we never saw in the original show. 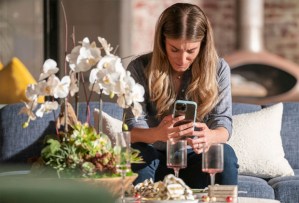 Another major change was centering the series around a romance instead of a friendship, as seen in the original series between Sam and his holographic co-pilot Al. Now Ben is accompanied on his leaps by his fiancée Addison, in hologram form.

“Al and Sam, they had an incredible chemistry — [a] bromance for the ages —  and we’d be silly to try to recreate something like that,” Lee notes. “Also, it’s a different time. Buddy comedies are great, but why not see a romance instead of a bromance? I think this is a great opportunity to dive into different dynamics of what these leaps can feel like, especially if there’s more at stake than just a friendship.”

Of Quantum Leap’s main romance, Gero adds, “It’s just a really neat twist on what is ultimately the worst long-distance relationship, like truly different time zones in a way that I don’t think anyone has experienced.”