Nicola is a decent kid in a dirty world. A 15-year-old boy who’s mired in the usual mess of pubescent crises — raging hormones, idiot friends, hostile bullies — Nicola stands out for the attention that he still manages to afford his single mom and younger brother; whether motivated by love or by the unfulfilled masculinity that his absent father left behind, there’s no denying that he’s motivated. Alas, that’s kind of the problem. In most places, it might be a good thing for a teenager to be a real go-getter with ambition to burn and a savvy head for business. In the corrupt heart of Naples, which 2008’s “Gomorrah” effectively minted as the new epicenter of mafia cinema, those same traits are more like a death sentence.

A familiar but arrestingly visceral crime story with a coming-of-age twist, Claudio Giovannesi’s “Piranhas” has an unusual relationship with its own predictability. In some ways, this is a movie that you’ve already seen a million times — it’s basically the same old story about how being a gangster is fun until it’s not. From the moment it starts, most viewers will be able to make a few broad assumptions about how it ends.

But where a less muscular or damning portrait might succumb to Giovannesi’s paint-by-numbers plotting, “Piranhas” effectively weaponizes its fundamental obviousness against a naïve young hero who’s so busy eating his way up the food chain that he loses sight of the fact that he lives in a fish tank. For all of its stock characters and standard-issue twists, this isn’t a film that sinks into cliché so much as it’s a film about who swims way straight to the depths after mistaking a glimmer of light for the surface of the water; it’s not a film about how crime doesn’t pay so much as it’s a film about why certain people can’t stop buying into it anyway.

Played by the fittingly named Francesco Di Napoli (a local kid and first-time actor in a film that’s almost entirely cast with local kids and first-time actors), Nicola is a guppy born with the hard intensity of a shark. He and his feral gang of friends are introduced fighting with some other wayward youths for ownership of the massive Christmas tree that stands in the center of town; their miscreant energy seems obnoxious at the time, but will come to feel almost painfully innocent by the time the film is over. These roving packs of pint-sized gangsters are a well-documented phenomenon in Naples, where many of the kids grow into paranza as soon as they’re old enough to be of use to the Camorra syndicates, but few of them are champing at the bit like Nicola.

Sick of watching the mafia fleece his mom’s shop for protection money, and frustrated that he can’t afford the exorbitant cover charge that (underage) men have to pay at the local nightclub, Nicola takes the initiative and befriends the slightly older Agostino (Pasquale Marotta), the son of a mob boss who was murdered not too long ago. The two of them decide that the world is their oyster, and partner up with a scary boss who could use some fearless new foot soldiers.

As soon as Nicola and his pals have a portion of the Camorra at their backs, things begin to escalate: Mischief becomes mayhem, mayhem becomes looting, and looting becomes armed robbery (complete with a tragicomic scene of the kids watching a YouTube video in order to learn how to operate a machine gun). Some of the violence is assigned to them, but most of it is just the result of a feeding frenzy, and Nicola is never satisfied. Not after he gets a swagger in his step and a wardrobe of fancy new clothes, not after he woos the prettiest girl in town (Viviana Aprea), and not even after he buys his mom the life she’s always wanted. She’s proud of him — her son is making something of himself. He’s the new pope of Sanità. 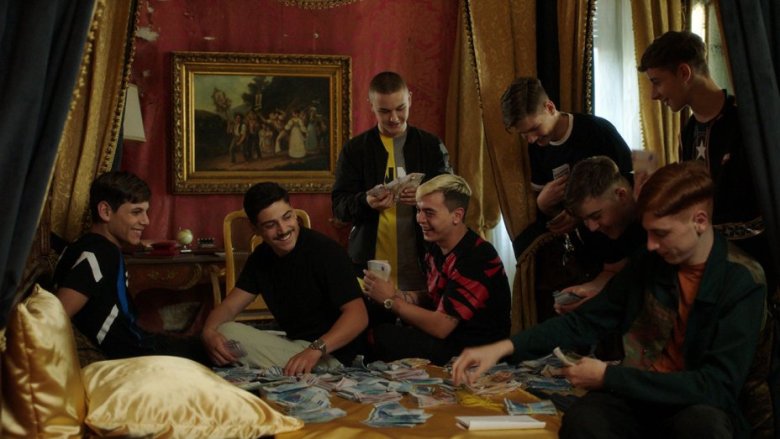 Daniele Ciprì’s fluid and prehensile camerawork makes it easy to share in Nicola’s excitement. The handheld cinematography is raw but touched with the romance of a young man’s purpose — it cuts through the unfakeable streets of Naples’ Spanish Quarters with the latent violence of a shark’s fin gliding above the surf, while Andrea Moscianese’s spare and ominous guitar score occasionally hangs above the action like a storm cloud waiting to explode. Even in its most familiar moments, “Piranhas” bristles with the adolescent excitement of a kid making his own mistakes.

Giovannesi doesn’t glamorize these mini-gangsters, but he makes it easy to appreciate how they glamorize themselves. Whenever you might get disoriented between depiction and endorsement, Nicola looks at himself in the mirror and says something like “Wow, we’re awesome,” and you remember that he doesn’t know how doomed he is. When he meets the most powerful mafia boss in town, Nicola is too awed to appreciate how the old man is only alive because he’s under house arrest and does nothing but watch TV all day (Nicola’s only thought is to bring him some video games). He doesn’t realize that he’s not the first person to think of “an ethical crime syndicate,” or that the cemeteries of Naples are filled with dead kids who once thought they were strong enough to swim upstream.

“Piranhas” is often too caught in the current of its own cyclical death spiral to elevate Nicola above the archetype he’s meant to represent — which itself can be seen as a critique of a crimeland in which everyone is all too happy to play their parts — but perhaps it’s telling that the film’s most intriguing scene is also its most unexpected. The specifics are best left unspoiled, but it’s safe to say that Nicola takes a bizarre approach to his first hit; his resolve never wavers, but it’s almost as if he has to become a different person (divorced from his sense of self) in order to get the job done. It’s like he doesn’t want to recognize himself or be fully in touch with the reality of what he’s doing. Maybe he’s just using a costume to hide the fact that he’s a killer cliché.

Whatever the case, and if only for a moment, Nicola is able to blur the line between the things he can’t see, and the things he just doesn’t want to see. It’s right back to business as usual after that, and “Piranhas” starts to scramble in the water as soon as it begins swimming towards its inevitable conclusion, but it’s hard to shake the feeling that the bigger Nicola’s gang becomes, the more they all just look like kids who are dressed up as killers because there are no other roles for them to play.

Music Box Films will release “Piranhas” in theaters on August 2. The film is also screening as part of Film at Lincoln Center’s Open Roads series on June 12.