Good Morning Britain viewers were informed of some chaos going on in the studio on Wednesday morning after Piers Morgan told those watching they’d spotted the creature during one of the commercial breaks. And with the mouse taking all the attention in today’s programme, Piers spotted an opportunity to make a dig at BBC Breakfast presenter Dan Walker – who he has taken aim at on multiple occasions in the past – by asking his colleagues whether they thought they should name the mouse after him.

Today’s programme had a bit more drama than usual after Piers made a big announcement to ITV viewers.

After returning from an advertisement break, he said: “In breaking news, there’s a mouse on the studio floor.

“There have been shrieks and wails – a lot of drama here in the commercial break.”

Addressing whether viewers would get to see the creature, he added: “It is under one of the cameras, we just don’t know now which one, Ranvir you’re terrified of mice?” 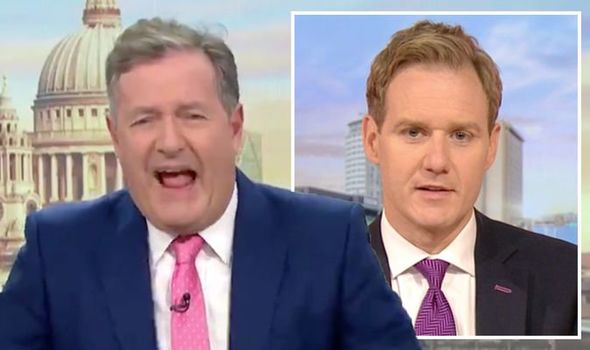 His co-star replied: “Yeah, I don’t like mice… I had one in my house once!”

Weather presenter Laura Tobin chimed in, saying: “I was looking down and then I saw something move and I was just like, ‘Aaaah!’”

Susanna promising: “We’ll bring you right up to date, we’re across that story and we have the full surveillance team on the mouse and its whereabouts

However, as the situation continued, Piers couldn’t help but take aim at BBC host Dan Walker, asking his co-stars: “Shall we name it Dan Walker?”